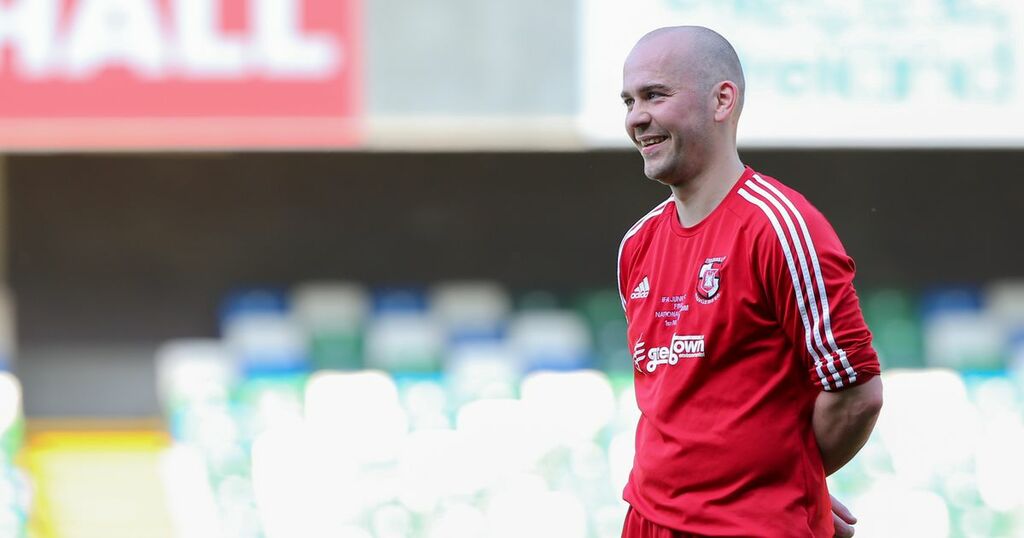 Michael Kerr admits he went through a gamut of emotions after deciding to step down as Enniskillen Rangers manager.

Kerr was appointed back in 2015 but endured a less than convincing start when his side failed to score a single goal in his first four games in charge.

During his six years at the helm Enniskillen Rangers went on to claim a hat-trick of Junior Cup wins and recorded back-to-back league titles.

It has been a halcyon era for the Fermanagh club, with Kerr leaving his own indelible mark on their history books.

But all good things eventually come to an end.

Kerr believes the time is right for a new manager with fresh ideas to take over, and lead the club into a new era.

“It was a tough decision, and it was an emotional week,” Kerr said.

“But I felt it was the best decision for the club going forward. It was always on my mind that I would step down if I suddenly didn’t feel I was the right man to take the club forward.

“It was a tough decision, but one that was done in the best interests of the club, and I am glad it is done and dusted now.

“Enniskillen Rangers is a club close to my heart. I played my youth football here, and a few years in between I moved. I came back and played and then took over as manager.

“I am not leaving the club permanently. I am stepping out of the management role, but it is a club I will stay involved in. And hopefully I can play some more with the reserves and help some of the younger lads coming through.”

Kerr added: “When I was looking at it, I just felt that it was maybe time for change. Sometimes for the players, when you’re listening to the same manager it can be hard to keep the whole thing going.

“I didn’t want the lads getting comfortable with me and things just filtering out a bit. I have based my decision purely on football reasons, and hopefully whoever comes in can give the lads a new lease of life.”

Kerr admits they were stellar moments for the club, with much of the success down to a special group of players.

“The Junior Cup was something very special for Enniskillen Rangers,” he said.

“I think only two teams have ever won it three times on the bounce, and unfortunately we lost out the fourth year in the final, and that was on penalties. But those three wins were fantastic, and it was brilliant to see so many happy people around the club.

“Another big one for me was winning the league, and to back it up by winning it again was incredible.

“Winning leagues and Junior Cups was brilliant, and the players deserved every success because of the hard work they put in on the Tuesday and Thursday nights.

“People didn’t see that, but I had a brilliant group of players who put the work in. They were easy to manage because they didn’t have any airs or graces about them. They sacrificed themselves for the success of the club.”

As for standout moments, Kerr says winning the first Junior Cup and league title will always be special.

“To lead the team out to Windsor Park for the first Junior Cup final is something I will never forget. I brought my daughter with me who was only one or two at the time, so that was an unbelievable moment,” he added.

“We beat Hill Street 5-1 in that final. The performance from the boys was superb.

“The first league title was won at our home ground, and we hadn’t won it in almost 20 years. I think that was the biggest crowd we ever had at our place. There were 6-700 there that day.

“We were playing our other title challengers and a draw was no good to us. And we managed to win 3-0.

“So it is hard to separate those two successes. They are evenly matched.”

When Kerr was appointed back in 2015, he admits he didn’t have any lofty targets or ambitions.

He wanted the club to be “challenging”, but never envisaged the roll of success Enniskillen Rangers would enjoy in the following six years.

“The club had been going up and down in the league, but we wanted to push for the top four and maybe challenge. But I never thought we would win all these trophies,” he said.

“So top four was the initial aim, not winning Junior Cups and back-to-back league titles.

“We didn’t score a goal in my first four games in charge. We drew two and lost two.

“I remember thinking management wouldn’t be too bad, and then I was coming home in foul form wondering what I had done.

“So there were a lot of doubts. I had never managed before, so you start questioning yourself very early on.

“Thankfully we clicked in the fifth game and won 4-3, and it sort of took off from there.

“I was playing as well, but I had good people around me. I must give a big shout out to Tony Roofe and Stephen McFrederick, without them two I probably wouldn’t have played at all.

“They were a massive support to me over those six years.”