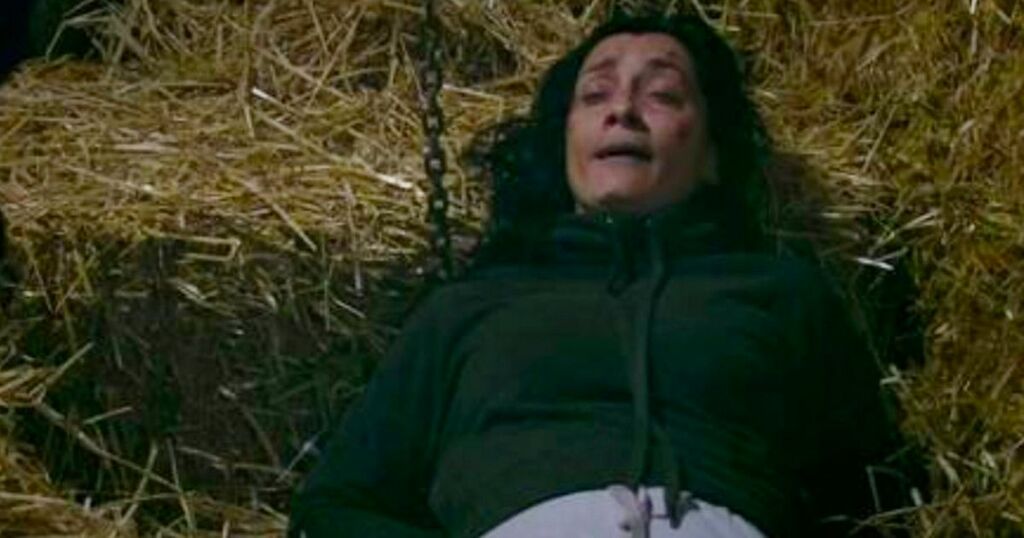 Emmerdale viewers thought the moment they had been waiting for had arrived on Tuesday night, only for Meena Jutla to get the upper hand again.

The serial killer is keeping her sister Manpreet Sharma and Vinny Dingle hostage, and is planning to murder them both.

Things took a turn though in the latest episode of the ITV soap, as Meena feared her games were about to be exposed by Liam Cavanagh.

Her pregnancy lie was well and truly rumbled, leading to her blackmailing him with a sickening sexual assault lie.

Back at the barn, Manpreet was trying to drag Vinny's house key from across the floor in the hope of using it to set her hands free from the cable ties.

Vinny had tried but couldn't manage it, before tossing the key towards his fellow victim.

While Vinny was barely conscious at this point, Manpreet did manage to free herself but was stopped in her tracks by Meena who had returned.

Biding her time, she waited before pouncing at her killer sister and managed to knock her to the ground.

She was trying to attack her so that she could flee with Vinny and raise the arm, and ended up injuring Meena's arm.

After a scuffle on the floor, Meena managed to overpower her injured sister who was weak due to all the drugs she'd forced her to take.

Unfortunately Meena attacked her sister again before tying her up, with Manpreet and Vinny back to square one again.

After so many instances of her being attacked and trying to flee, fans have questioned whether this time it's too late for the character.

Meena declared at the end of the episode that she had brought forward her plan to kill again, wanting to murder both of them that day.

So does this confirm a shocking death for Manpreet, or will she get out in time?

Viewers took to Twitter and called out Manpreet for her "stupid decision", believing she should have waited to escape.

One fan said: "Ridiculous Manpreet would try to overcome Meena whilst she finally had the keys in her hands. She should've waited until it was clear and untied Vinny and tried to get out of the barn before Meena came back. Meena is completely bonkers."

Another tweeted: "Manpreet is dehydrated and drugged so she gets a pass but why does everyone make such stupid decisions, just wait until she was gone and then escape!!

A third added: "Why didn't Manpreet just wait til Meena went back to the village to actually escape instead of trying to square go her?"

Meanwhile, a fourth viewer wrote: "Manpreet managed to get out of the chains and she waited there for Meena to come back? She should have ran the second she got free and found someone to help!"