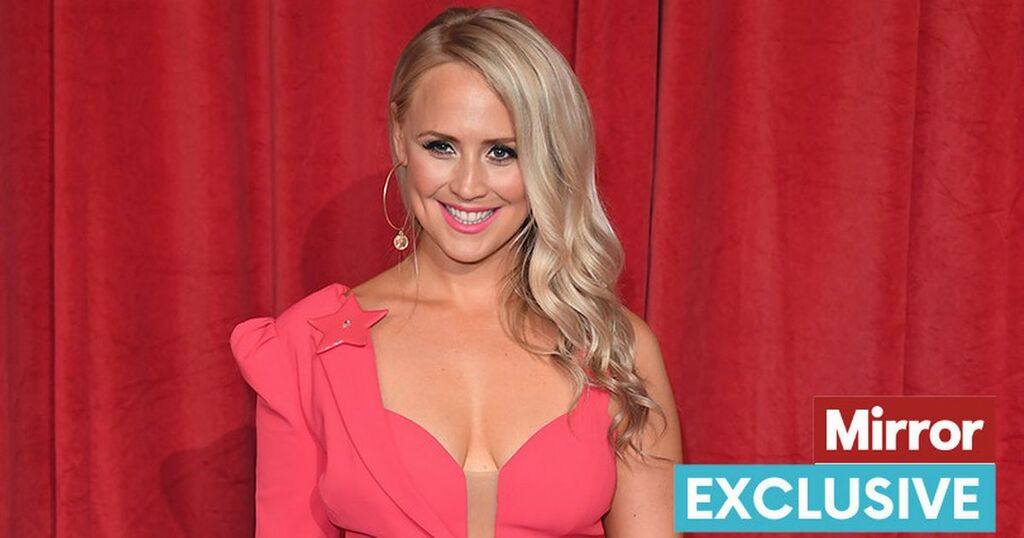 When Emmerdale actress Amy Walsh discovered she was pregnant with her first baby she was in the middle of a gruelling postnatal ­depression storyline.

And while she was thrilled at the thought of becoming a mum for the time in her 30s, she couldn’t help but be concerned that filming such harrowing scenes would hurt her unborn child.

It was so early in the pregnancy that nobody at Emmerdale even knew, so Amy sought medical advice about her situation.

The actress, who plays new mum Tracy Metcalfe, says: “It was very strange timing because the early days of my pregnancy came at the height of that story. It was a lot of heavy content and emotional scenes, so I checked with my midwife to make sure that me crying all the time at work couldn’t be affecting the baby.

“She asked if I was enjoying the work and coming away feeling happy and satisfied. When I said I was she explained that I’d be getting endorphins from doing well at work and that it was different to me going through that turmoil personally.

“She said if I was experiencing it for real it would be 24/7, but this was me faking it for a few hours a day.

“It was quite tiring, but I just rallied through. I felt sick, so I’d literally be nipping off set for a handful of nuts or a satsuma every 15 minutes.

“Emmerdale didn’t know for the first few months, but once I told them they were great. They said if I wasn’t comfortable with any of the story, they could make it less dramatic, but I’d filmed most of it by then.”

The 34-year-old and her boyfriend, EastEnders actor Toby-Alexander Smith, recently confirmed that they became parents over Christmas, saying: “Well…it’s been a busy week! Hope you all had a good one. Happy New Year from the three of us.”

Amy, who has played troubled Tracy for seven years, said the PND storyline did initially shock her. “It was scary that you could be fine and not have been through any mental health issues and then this can just suddenly happen,” she explains, speaking before the birth.

“Now that I know it can happen to anyone, it could happen to me. But I’m not worried, it’s more that I have the knowledge, which is brilliant as I’m prepared. I know that there is help, which is what the storyline was all about. There is hope.”

Amy, sister of Girls Aloud star Kimberley Walsh, reveals the plot was also an eye-opener for her boyfriend. She says: “There were a few scenes where Tracy was quite awful to her boyfriend Nate. Toby said that if I was snappy and grumpy and behaving that way towards him after having our baby, he would just have assumed I was tired, he wouldn’t have known it was PND. It’s made us both aware of the signs if it happens to me.”

Amy and Toby, 30, have been together since 2019, after meeting by chance in the audience of Strictly Come Dancing.

Toby, who plays abusive Gray Atkins in EastEnders, was supporting his co-star Emma Barton and Amy was there for ex-Dales actor Kelvin Fletcher.

Amy says: “We were both seated next to each other. It could have been so different. He could easily have been sat next to my sister and I might never have said two words to him.

“He didn’t know I was in Emmer-dale and I didn’t know he was in EastEnders, but we hit it off. Platonically really, we weren’t particularly flirting, but we really got on and connected.” The couple moved in together in 2020 and then in April last year Amy discovered to her delight that she was pregnant. She had become a mum on screen just two months earlier.

She says: “I’d always wanted children, I was getting to an age where I was ready for it and then I was playing pregnant, which made me broody.

“People would tell me the fake bump suited me and I’d be like, ‘It does, doesn’t it?’

“It was in the back of my mind that it might not be an easy journey because I’ve known I had polycystic ovaries from the age of 20. That induced a fear in me from quite an early age that I might struggle to conceive.”

Late last year Amy and Toby moved from Hertfordshire to East London to be closer to her family. “Both my sisters have just had babies – Kimberley’s got a six-month-old and Sally’s got a five-month-old,” she says.

Amy, who has seven nephews, laughs. “I feel well clued up on what to expect and they’re always there at the end of the phone; I’m very lucky.”

Viewers will see Tracy leave Emmerdale tonight, while Amy is on maternity leave. She adds: “I used to make resolutions, but the happier I’ve got, the less I put those kind of pressures on myself every year, because you never stick to them anyway.

"I had a period where I slogged it at the gym every day and I’ve been a victim of fad diets. I thought I was looking after myself, but actually I was overdoing it.

“I know now that being content is the most important thing of all.”