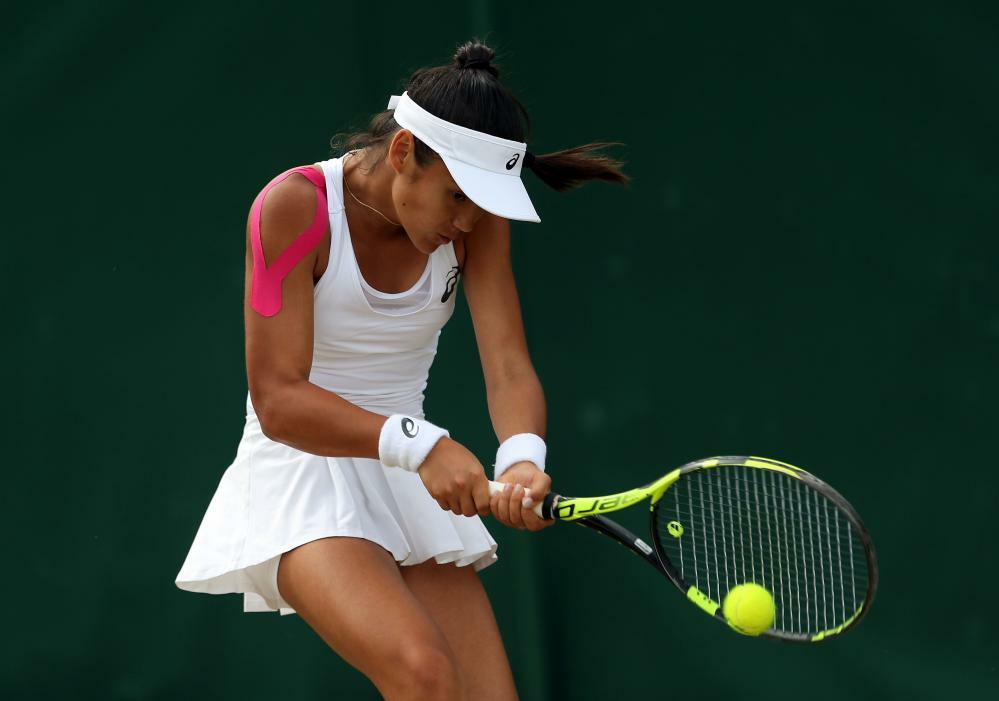 9 July 2017
Emma Raducanu’s first mention in the Guardian: results and a photograph as the 14-year-old wins her first round match in the girls’ singles at Wimbledon. She loses in the next round.

9 July 2018
On her way to a quarter-final in the girls’ singles at Wimbledon, the Guardian’s Gerard Meagher reports on a first-round win for “the highly rated” Emma Raducanu over the USA’s Gabriella Price. “‘I got off to a strong start,’ said Raducanu, who was born in Toronto to a Romanian father and Chinese mother but came to the UK aged two. “In the second set, she had five break points to go 5-0 up. We had a very long game and it was a pretty good battle, but I fought well.’”

30 July 2020
Tumaini Carayol records Raducanu’s 6-2, 6-4 defeat to Johanna Konta in her first match against a top-100 ranked player, but sees plenty of grounds for optimism. “At 17 years old, Raducanu is the biggest young British prospect in the women’s game and she has shown why this week at the Battle of the Brits, her meaty serve and groundstrokes dominating throughout.”

23 November 2020
Former British No 1 Anne Keothavong singles out a player of immense promise – if she stays fit. “She’s got something special,” Keothavong tells the Guardian’s Kevin Mitchell, “but the immediate concern for me is her competing on a regular basis, and looking after her body. Probably the biggest problem we have with young players is the number of injuries they sustain from a young age, which I find quite worrying.”

30 June 2021
On her grand slam debut at Wimbledon, Raducanu claws back a 4-1 deficit in the opening set of her first round match to defeat Russia’s Vitalia Diatchenko 7-6, 6-0. “Raducanu also had to save break points to avoid going 5-1 down in the opener and her recovery to win it after 83 minutes drained the fight from her opponent, as she eventually ran out an easy winner,” Greg Wood reported.

1 July 2021
Coverage – and expectation – escalates. “In the 44 years since Virginia Wade became the most recent British woman to win Wimbledon, there have been many excellent performances from outstanding prospects at the All England Club. Not all of them have gone on to have big careers but in Emma Raducanu , we may just have uncovered the genuine article,” writes Simon Cambers. “The 18-year-old player’s 6-2, 6-4 victory against the world No 42 Marketa Vondrousova, the Czech who reached the French Open final in 2019, was a display full of poise, Raducanu showing she has the head to match her undoubted talent as she reached the third round.”

2 July 2021
Raducanu is in the news. “Raducanu is becoming a household name in her grand slam debut – all while awaiting her A-level results,” writes Caroline Davies. “Two months ago, she was sitting maths and economics exams; on Saturday, she will play in the third round. If she had to choose between an A* in all her A-levels, or round four of Wimbledon, she is clear. ‘I’d have to say round four of Wimbledon. I think anyone that knows me would be like, ‘What?’ Everyone thinks I’m absolutely fanatic about my school results,’ added the former pupil at Newstead Wood, a girls’ grammar school in Orpington, Kent. ‘They think I have such an inflated ego about it. Actually, I would say I have high standards for myself. That’s helped me get to where I am in tennis and also in terms of school results.’”

3 July 2021
“Emma Raducanu walked on to Court No 1 with a huge smile, her arm raised high, soaking in the atmosphere on her first experience on a show court at Wimbledon. Less than two hours later, the 18-year-old left as the youngest British woman to reach the second week since 1959 and with a standing ovation ringing in her ears.”

4 July 2021
Carayol reflects that the Wimbledon Covid “bubble” may be helping Raducanu’s progress. “Her story has defined the first week of Wimbledon and in some way it has been to her great advantage that it has happened at a time when players are sequestered in a hotel and away from the public. In 1979, Debbie Jevans was another British teenager in the fourth round at Wimbledon, a feat not repeated until Laura Robson in 2013. Jevans says: ‘I was playing in different times with less distractions but I had to do press conferences and in a strange way the Covid restrictions might be helping her. She’s doing press on Zoom and not sitting in front of a room full of reporters. There are probably fewer interview things to do in general and she’s living in the bubble, so I think that may make it easier for her to shut things out.’ A common thread in Raducanu’s career is that she has played sparingly because of a variety of injury niggles, school exams and now the Covid-19 pandemic. But when she plays, she performs.”

In a column Robert Kitson celebrates. “There is nothing in sport quite like the unexpected emergence of an unaffected new star. It is the novelty that never wears off: the wide-eyed smile of the young athlete who can scarcely believe their wildest dreams are being realised, a captivated audience enjoying a first glimpse of talent and poise from beyond the tramlines of ordinariness. As of this weekend, this phenomenon can now be retitled the Emma Raducanu Effect … As Andy Murray limps into the twilight of his extraordinary career, how blessed is British tennis that the barley water gods have now served up such a likable, well-adjusted successor?

5 July 2021
Trouble. “Over the course of the delightful, exciting past week of tennis, Emma Raducanu’s profile has risen from that of a young, obscure talent to a player billed as a future focal point of British tennis. She had handled all of the attention and subsequent pressure in her stride, but on Monday night the toll of her run finally showed as the 18-year-old was forced to retire from the fourth round after suffering from breathing problems while trailing Ajla Tomljanovic 6-4, 3-0.” John McEnroe courts controversy for speculating about the reasons for her exit. “Dr Alex George, an A&E doctor, tweeted: ‘I didn’t realise John McEnroe was medically qualified or that he has X-ray vision!’”

6 July 2021
Raducanu says that before Wimbledon the largest crowd she had ever played to was about 100 people. “This year’s Wimbledon is just one event of many to come,” writes Carayol. “Raducanu will likely have the opportunity to play this tournament many more times and, should her progress continue, there are copious opportunities to finish it on a more positive note. The biggest challenge to come will be getting on the road, travelling and enduring the year-long grind of professional tennis after only doing so for short periods during her junior career.”

24 August 2021
“No matter how monumental a victory is or how much one run can change a life, one of the great challenges in tennis is what follows away from the spotlight as a player looks to build a career to last,” writes Carayol. “This has been the challenge before Emma Raducanu in the wake of her breakthrough Wimbledon, as she has spent the past few weeks travelling around the United States and playing to crowds a fraction of Court One’s capacity. So far she has thrived. ‘I’ve honestly loved it,’ says Raducanu in a Zoom roundtable interview in New York. ‘I think that this has been the longest trip I’ve ever done. In total it might be like five weeks at the end so it’s definitely a new thing for me, and it’s probably gonna be my life from now on and I’m honestly just taking every week as it comes. The trip has flown by because we’ve just been focusing on the craft every single day and taking care.’”

4 September 2021
“The way that Raducanu has improved over the summer serves as a reminder of just how absurd every last criticism she received after her Wimbledon exit was. That was immediately clear at the time, but this summer’s US hardcourt run, during which she has now reached the US Open third round from qualifying without dropping a set, has made a mockery of any doubts. The key to tennis, especially for any young player, isn’t merely winning matches but recognising the lessons that need to be learnt along the way. Nobody arrives on the tour fully formed. The experience they gain allows continued improvement and losses are both inevitable and often even more valuable than victories. The most successful players heed all of those lessons. When Raducanu speaks about her Wimbledon run, she doesn’t only focus on the wonderful victories. She was immediately determined to address her fitness after the event and it remains a continuous goal.”

6 September 2021
“For all that Emma Raducanu has achieved and how far she has come over only a few fleeting weeks as a full-time professional, one of the opportunities she was still waiting for was the chance to battle against a top player. Until she stepped on to Arthur Ashe Stadium, she had never faced a top-40 opponent or tested her strengths against the best. When the time came against one of the most in-form players on the tour, the Olympic champion, she surveyed the threat across the net and simply stepped up another level. Raducanu extended her wondrous summer run with a mixture of composure, intelligence and quality, outplaying Belinda Bencic 6-3, 6-4 to reach her first grand slam semi-final.”

10 September 2021
“There’s unexpected and there’s this: a US Open final between two teenagers ranked 73rd and 150th in the world. That’s where things stand after Thursday’s extraordinary women’s semi-final twin bill at Arthur Ashe Stadium, the latest shocking development at the season-ending grand slam which, despite the absence of some of the sport’s brightest stars, continues to unfold in the most unpredictable of ways. Thirty-eight months ago, Emma Raducanu and Leylah Annie Fernandez met in the second round of the Wimbledon girls’ singles. Now they will cross paths for the first time since then with all to play for in the world’s biggest tennis stadium: a $2.5m cheque and what surely will go down as the unlikeliest US Open championship on record – regardless of who wins.”