Emma Raducanu is the joyous inspiration we need now 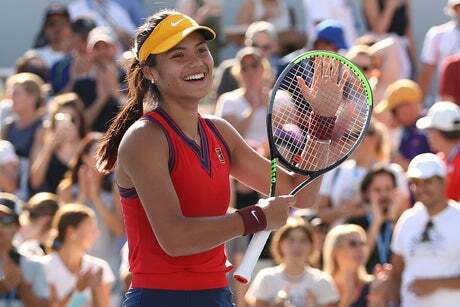 There aren’t many people for whom receiving A-level results are a footnote in the diary. However, last night, after a searing 65-minute demolition of another top 50 opponent, 18-year-old Emma Raducanu continued her astonishing run at the US Open to reach the quarter finals, only a couple of weeks after getting her exam results. The British superstar is still yet to drop a set in the tournament and has lost fewer games in her first four US Open matches than any player since Serena Williams in 2013.

Since her magical Wimbledon performance earlier this summer where she entered the tournament as a wildcard and reached the fourth round, Raducanu has captured the nation’s imagination. She is a joy to watch — her confidence, excitement and passion are infectious, and her interaction with British tennis legend Virginia Wade last night was spine-tingling. On top of her undisputed tennis abilities, she has made an impression off the court by raising the profile of performance anxiety.

After withdrawing from Wimbledon following breathing difficulties, she put out a statement on Twitter saying she felt the experience of competing in the championship’s last 16 had “caught up with her”. Her honesty and candour prompted other athletes to share their stories — within an hour of Raducanu’s statement, Marcus Rashford tweeted his encouragement and said he had experienced something similar during a match early in his career. I still can’t really get my head around the fact that people born in 2002 are out of nappies, let alone fully-functioning adults doing such sophisticated things as raising awareness of the stigma surrounding mental health in sport.

As a lifelong tennis fan, I can hardly contain my excitement at the idea of Britain’s next big hope for the sport being a young woman of mixed heritage. While tennis is one of the few major sports to have elevated female athletes to the same heights as men, it still has the reputation of being elitist. Having relatable role models in sport is crucial, particularly for female retention. By the age of 14, girls drop out of sports twice as often as boys, according to the Women’s Sports Foundation. Growing up playing tennis as a mixed race girl, Heather Watson’s success meant I always felt like I belonged. Raducanu is surely inspiring a new generation.

Do you think Emma Raducanu is the next big hope for British tennis? Let us know in the comments below.