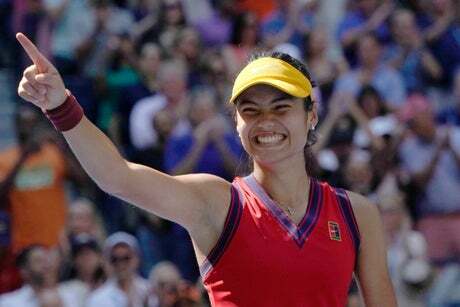 Emma Raducanu is through to the US Open semi-finals after a sensational victory over Belinda Bencic in New York.

The British teenager - who also reached the fourth round at Wimbledon earlier in a fairytale summer - is the first female qualifier in the Open Era to make the last four at Flushing Meadows after a 6-3 6-4 defeat of the reigning Olympic champion from Switzerland on Wednesday.

Raducanu, 18, is set to replace Johanna Konta as British no1 from next week and will also break into the world’s top 50 after a meteoric rise to prominence over recent months.

She is the first British woman to reach the US Open semis since Jo Durie back in 1983.

"Of course, playing Belinda, she is such a great opponent and is in great form, she hits the ball so hard, I had to adjust and adapt and it was a really tough match. I am so happy to come through and thank you so much for all your support today,” Raducanu told Amazon Prime Video.

"I have an absolutely amazing team and I have a team back home who could not be here - I am sure they are watching, I hope!

"Thank you so much everyone, I wish you could be here with me but everything we have been working for has shown here.

"It was 0-30 in my last couple of service games so to hold was pretty big, it was one point at a time and trying to focus on what I can control - Belinda was going to fight to the end but I am really pleased to come through that.

"To have so many young players here doing so well shows how strong the next generation is - everyone is on their trajectory, so I am just here doing what I can control and it is my own journey."