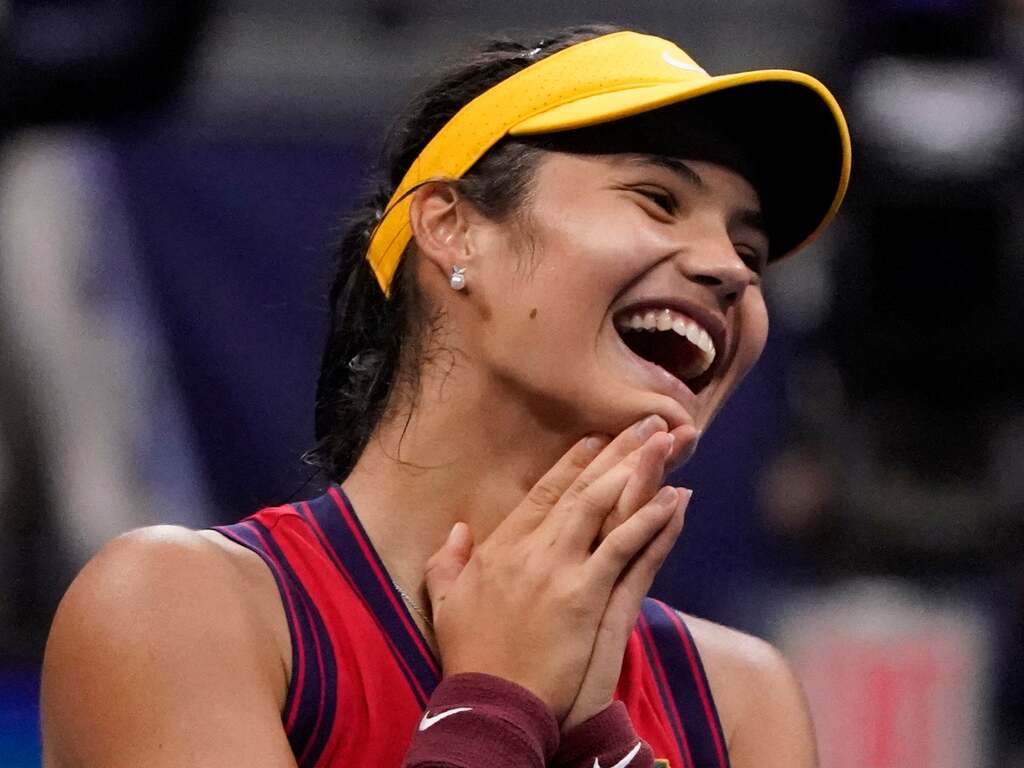 British tennis player Emma Raducanu has made history by reaching the US Open final after a sensational performance against 17th seed Maria Sakkari – winning 6-1 6-4.

Her impressive display – at just 18-years-old – makes her the first qualifier, male or female, to reach the final of any grand slam tournament.

She is also the first British woman to earn a place in a major final since Virginia Wade won Wimbledon in 1977.

Just one match lies between her making history once more to become the first British female winner at Flushing Meadows since Wade in 1968. It’s definitely going to be a thrilling watch as Raducanu – ranked number 150 in the world – faces 19-year-old Leylah Fernandez, ranked No. 73.

This all-teen lineup is also noteworthy due to the match marking the eighth Grand Slam final in the Open Era between teenagers – the last being back in the 1999 US Open when American Serena Williams defeated Switzerland’s Martina Hingis.

After her win, Raducanu said on court: “Honestly the time here in New York has gone so fast. I’ve just been taking care of each day and three weeks later I’m in final. I can’t actually believe it.

“Today I wasn’t thinking about anyone else except for myself. While I have the moment I want to thank my team and the LTA and everyone at home for all their support.

“Since I’ve been here from the first round of the quallies I’ve had unbelievable support.”

Pure happiness under the lights in New York 🌃🗽❤️ pic.twitter.com/j5721WEEaL

Celebrities, politicians and fellow sportspeople have shared their support for the teen online and congratulated Raducanu on her amazing achievement.

What an amazing performance from @EmmaRaducanu !! ❤️

Manchester United and England footballer, Marcus Rashford congratulated Raducanu and wished her luck ahead of her final match on Saturday (September 11).

Congrats @EmmaRaducanu what an achievement already!! Good luck this weekend we’re all be cheering you on back home 🎾

Can u dig it congratulations to Emma Raducanu c’mon LG

While broadcaster and TV personality Piers Morgan, who previously criticised Raducanu for withdrawing from Wimbledon earlier this year, tweeted “WOW!” along with applause and fire emoji in reaction to her semi-final win.

Politicians and a member of the Royal Family also chimed in with messages of support. Culture Secretary Oliver Dowden said Raducanu’s stunning journey to the US Open final was the “crowning glory” of the British sporting triumphs we have witnessed over the summer.

The Cabinet minister told Sky News: “It is wonderful, isn’t it, after such a fantastic summer of British sport?

“It seems a lifetime ago but we (the England men’s team) got through to the final of the Euros, we came second in the Paralympics, fourth in the Olympics but I think whatever happens, and I’m sure Emma will do brilliantly in the final, this really is the crowning glory of a brilliant summer of British sport, and we are so proud of her.”

Incredible! Well done @EmmaRaducanu. The whole country’s with you! https://t.co/wi0oztcsJB

Meanwhile, Prime Minister Boris Johnson tweeted his congratulations to the teen and said: “The whole country will be cheering you on in the final.”

Well done @EmmaRaducanu for a brilliant win at the #USOpen. The whole country will be cheering you on in the final.

The Duchess of Cambridge, patron of the All England Lawn Tennis Club, also congratulated Raducanu in a rare tweet where she signed off as “C”.

What an incredible achievement at this year's #USOpen @EmmaRaducanu!

We will all be rooting for you tomorrow 🤞 Wishing you the best of luck! C https://t.co/ceO5TuUEyt

— The Duke and Duchess of Cambridge (@KensingtonRoyal) September 10, 2021

It’s been quite the year for the teenager who, after arriving on the scene at this year’s Wimbledon fairly unknown and ranked 338, amazed everyone with her performance and managed to reach the fourth round of the tournament. She withdrew at this point due to breathing difficulties.

After her impressive Wimbledon performance, Raducanu was ranked No. 150 going into the US Open but her winning streak has secured her a top 40 ranking. She could even rise up to rank 24 in the world if she wins in the final.

What is certain though is that Raducanu will become the No.1 British woman from Monday (September 13).

Rankings Watch: Emma Raducanu can move to No.32 by reaching the final or No.24 if she wins the title. The 18-year-old entered the tournament ranked No.150.

On Monday she will take over as the No.1 British woman. #USOpen

Raducanu’s road to the US Open final

For UK fans keen to watch the action unfold and support the British tennis star, the match will take place on Saturday evening at 9pm UK time and 4pm in New York.