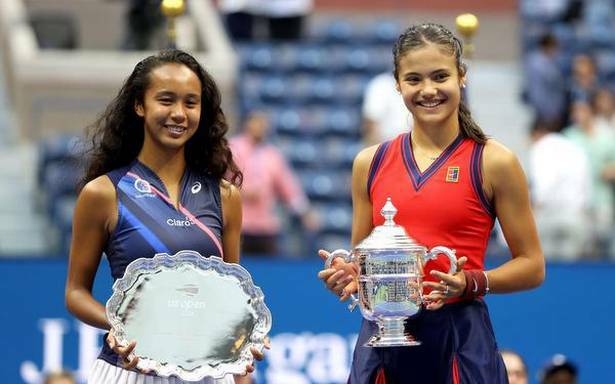 British teenager Emma Raducanu completed the greatest underdog title triumph in tennis history on Saturday, becoming the first qualifier to capture a Grand Slam title with a straight-set defeat of Canada’s Leylah Fernandez in the US Open women’s final.

It was a stunning achievement for the unheralded 150th-ranked teen, who didn’t drop a set in three qualifying matches and seven main draw matches over two weeks on the New York hardcourts in producing a stunner for the ages.

Not since Virginia Wade in 1977 at Wimbledon had a British woman taken a Slam singles title, with Raducanu the first Briton to claim the US Open crown since Wade in 1968.

Queen Elizabeth II was among the first to pay tribute to Raducanu’s remarkable win.

“It is a remarkable achievement at such a young age, and is testament to your hard work and dedication,” the British monarch said in a statement.

Wade and British men’s tennis legend Tim Henman were among a sellout crowd of 23,700 that created an electric atmosphere at Arthur Ashe Stadium in the first-ever women’s Slam final between unseeded players.

“I’m very proud of myself the way I played the last two weeks,” Fernandez said. “I hope to be back here in the finals and having the right trophy,” added a tearful Fernandez, before paying tribute to New York as the city marked the 20th anniversary of the 9/11 attacks.

The showdown of prodigy talents was the first all-teen Slam final since 17-year-old Serena Williams beat 18-year-old Martina Hingis for the 1999 US Open crown.

Reflection of the future

“Both of us were playing fearless tennis for two weeks,” Raducanu said. “I hope we play each other in many more tournaments and hopefully finals.

“It shows the future of women’s tennis and the depth of the game right now is so great.”

Raducanu has had the fewest Slam starts of any women’s Slam winner, reaching the fourth round in July at Wimbledon in her only prior Slam appearance.