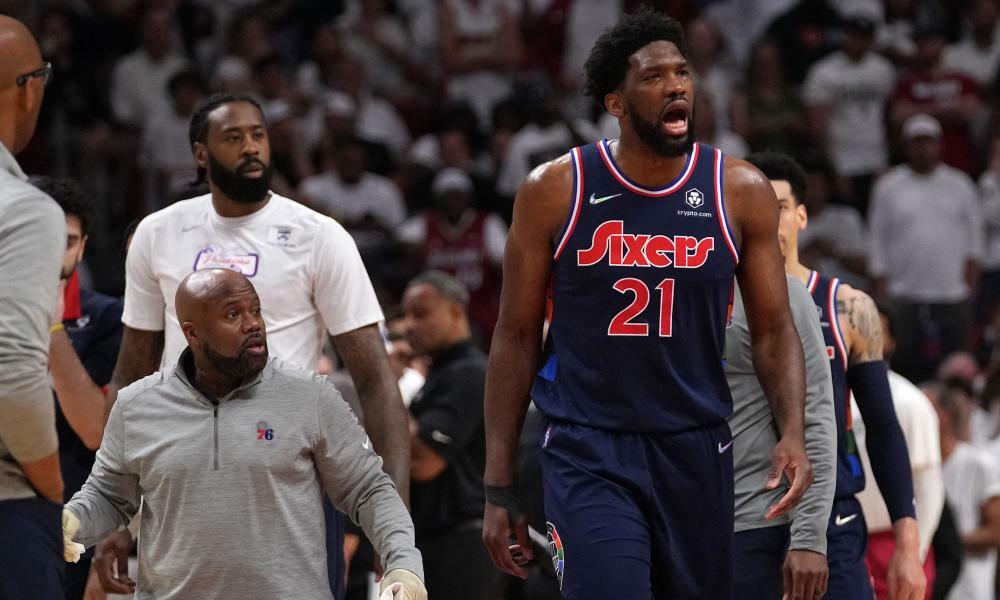 ‘What else can I do?’: Joel Embiid swerves MVP snub but remains a Philly hero
The 76ers star lost out to Nikola Jokić for the award for the NBA’s best player but many in Philadelphia…

The Independent UK
One subscription that gives you access to news from hundreds of sites
Jokic pips Embiid for second straight MVP: ESPN

The controversy over Bill Simmons’ profane remark about Jalen Green isn’t going away, with All-Star center Joel Embiid citing it…

Embiid on Losing MVP: ‘I Don’t Know What Else I Have to Do’

For the second year in a row, Joel Embiid came up short in pursuit of his first MVP award. The 76ers star center reportedly finished as the runner-up to Nuggets big man Nikola Jokić, who became the 13th player in the history of the NBA to win back-to-back MVP awards, according to ESPN’s Adrian Wojnarowski.

The league is expected to make a formal announcement later this week.

Although disappointed, Embiid told reporters Tuesday that he wasn’t surprised to see Wojnarowski’s report about the results. He acknowledged that a handful of players would’ve been deserving of the award and there was “no right or wrong” answer.

“I mean, this is something that I knew weeks ago, even probably two weeks before the season ended, after those games against whether it was Denver and Milwaukee, and when [ESPN did its] straw poll or whatever,” Embiid said after Philadelphia’s 120–85 loss to Miami in Game 5 of the Eastern Conference semifinal series. “I just knew it wasn’t gonna happen.

“Obviously, congrats to Nikola. He deserved it. He had an amazing season. There’s no right or wrong. There was a lot of candidates. It could have gone either way. Giannis [Antetokounmpo], Devin Booker, being on the best team in the league, by far. So, I guess, every year is all about whatever you guys decide, whatever fits the narrative as far as who’s gonna win.”

Embiid was one of three finalists for this year’s award after putting together one of the best seasons of his career. He averaged a league-best 30.6 points per game, along with 11.7 rebounds and 4.2 assists while playing a career-high 68 games.

“I’m not mad,” Embiid said of not winning MVP. “That’s two years in a row I put myself in that position. It didn’t happen. It is almost like, at this point, it is whatever. Whatever happens, happens.

“Last year I campaigned about it. This year I answered questions when asked, and the next few years until I retire, it’s almost like … I don’t know. Like I said, I don’t know what else I have to do to win it. To me, at this point it’s whatever. It’s all about focusing—not that I wasn’t focused on the bigger picture—but it’s really trying to put all my energy into the bigger picture, which is to win the whole thing.”

Embiid’s hopes of claiming his first NBA championship took a major hit Tuesday night as the Sixers looked completely outmatched by the top-seeded Heat. The 28-year-old center, who’s nursing an orbital fracture, scored just 17 points and posted a game-worst minus-29 in 33 minutes played.

The loss puts Philadelphia, now trailing 3–2, on the brink of elimination before the conference finals for the fifth season in a row. Embiid and the Sixers will have to stave off the Heat at home in Game 6 Thursday if they want to keep their hopes of a title alive.

‘What else can I do?’: Joel Embiid swerves MVP snub but remains a Philly hero
The 76ers star lost out to Nikola Jokić for the award for the NBA’s best player but many in Philadelphia…

The Independent UK
One subscription that gives you access to news from hundreds of sites
Jokic pips Embiid for second straight MVP: ESPN

The controversy over Bill Simmons’ profane remark about Jalen Green isn’t going away, with All-Star center Joel Embiid citing it…