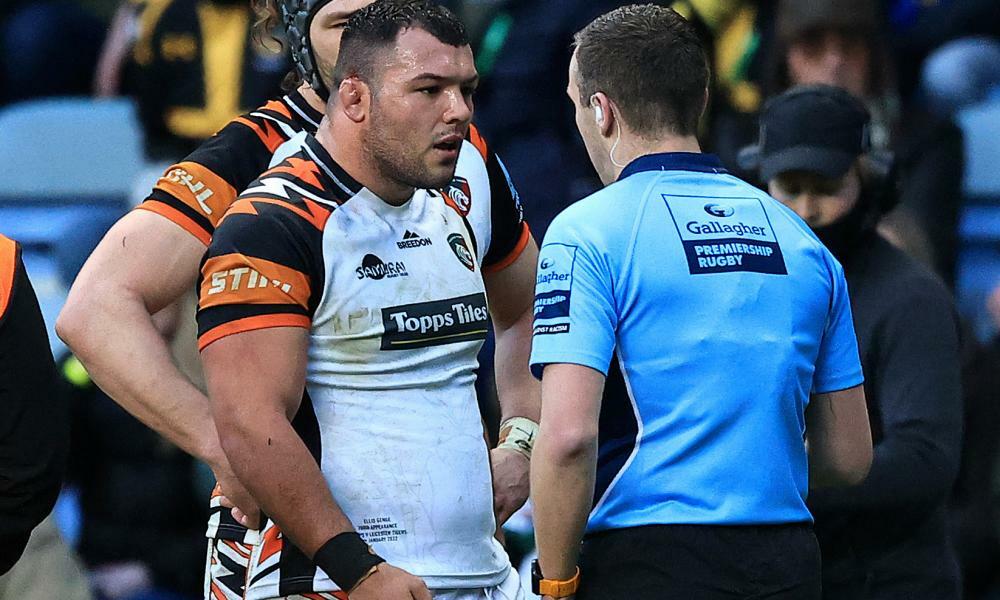 The Leicester captain, Ellis Genge, has apologised to his teammates for losing his head at Wasps on Sunday and collecting a yellow card which he believes “potentially cost us the game”.

Genge has insisted he made no attempt to eye-gouge the Wasps wing Francois Hougaard and labelled some of the post-game social media reaction as “absolutely ridiculous”.

The England prop was sin-binned shortly before half-time for lashing out at the Springbok international’s face and pulling his hair but subsequently escaped further sanction from the citing officer.

“A lot of people have said I tried to gouge him,” said Genge. “That’s absolutely ridiculous. I’d never even dream of doing something like that. That’s disgusting. But, yeah, I lost my head and pushed him in the face a bit. It potentially cost us the game, being down to 14 men for that length of time. I’ll learn from it.

“I have apologised to the boys for letting them down, I apologised to [head coach] Steve Borthwick but it is something I can’t promise I won’t do again. It is one of those things, you lose your head in the heat of the moment. I have not got a bad disciplinary record, I have never been red-carded in a professional game and I think I have got four yellows in my Premiership career.”

Genge, whose side go to Connacht in the Champions Cup this weekend, has also reiterated how much he loves captaining Leicester. “Imagine being at war and all your troops are ready to die. That’s what it’s like, that’s what our pack’s about.”

Equally, he says he has no regrets about opting to return to his native Bristol this summer to be closer to his family. “Without going into too much detail certain circumstances forced my hand,” Genge said. “I needed to be closer to them and see them more often. If we’ve learned something from Covid it’s that you don’t get to spend much time with the people you love, let alone in lockdown.

“I’ve been away from home since I was 16 and it’s time for me to go back and support my family, my sister, my dad and my mum in the best way I can. For me that’s by being back in Bristol.”

England’s Calcutta Cup clash with Scotland at Murrayfield on 5 February should now go ahead in front of a full crowd following the Scottish government’s decision to relax attendance restrictions next week.

The cross-Channel travel issues which have undermined this year’s European rugby competitions, meanwhile, have forced the organisers to classify a clutch of unplayed round-two fixtures as 0-0 draws ahead of this weekend’s penultimate pool round. Bath, Sale, Scarlets, Wasps and Bristol have all now been allocated two points after their pre-Christmas Champions Cup games against French opposition were called off.

The ruling will not impress Leinster, whose cancelled round-two game at Montpellier led to a bonus point “win” for their opponents. The organisers say a harsher verdict was imposed because, unlike the aforementioned clubs, the Covid-hit Irish province were unable to field a side. On the flip side Bristol have now accrued seven points without yet taking the field, giving them a decent chance of advancing to the last 16.

Northampton’s director of rugby, Chris Boyd, has been charged with improper conduct after suggesting the referee Adam Leal “didn’t have enough nuts” to award a third successive scrum penalty to his side at a key moment in his side’s 30-6 Premiership loss to Saracens this month. Boyd, who is returning home to New Zealand at the end of the season, will have his case heard by an independent disciplinary panel on Thursday.

Harlequins’ Alex Dombrandt has committed his future to the club by signing a new long-term contract. The former Quin Charlie Hayter has also been appointed as women’s and sevens performance manager by the Rugby Football Union, with former England captain Emma Mitchell becoming a performance consultant for the women’s game.