Elephants begin march from jungle to Mysuru for Dasara 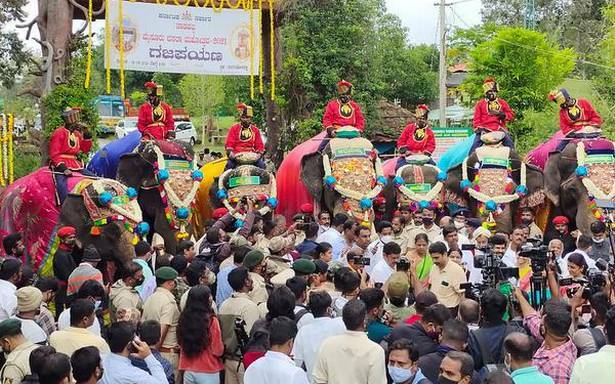 Elephants participating in this year’s low-key Dasara festivities began their journey to Mysuru on September 13 with the traditional ‘Gajapayana’ being flagged off at Veerana Hosahalli on the outskirts of Nagarahole near Hunsur.

The march of the elephants from jungle camps to the palace in Mysuru is usually a grand affair. However, in view of the COVID-19 pandemic, the event was kept low-key this year. The decorated elephants, led by 58-year-old Abhimanyu who will carry the golden howdah, left for Mysuru after priests from Mysuru performed puja amidst showering of flowers on the jumbos.

After the event, trucks carrying the elephants left for Mysuru. The jumbos will stay at Aranya Bhavan in Mysuru until their grand and traditional welcome into the palace on September 16.

The number of elephants has been restricted to eight this year as the ‘Jamboo Savari’ (procession of elephants) has been confined to the palace premises like last year in view of COVID-19.

The jumbo team is led by Abhimanyu, who carried the howdah for the first time in 2020 after Arjuna was rested because of advancing age. The team comprises five males and three female elephants. Vikrama, Dhananjaya, Gopalaswamy, Ashwatthama, Kaveri, Chaitra and Lakshmi are the other elephants in the team. Barring Vikrama, all other elephants took part in ‘Gajapayana’. Vikrama is expected to reach Mysuru later.

Abhimanyu and Gopalaswamy belong to Mattigodu camp while Kaveri, Vikrama and Dhananjaya are from Dubare elephant camp in Kodagu. Chaitra and Lakshmi are from Ramapura camp.

Usually, the procession culminates at Bannimantap with the elephants covering a distance of around 5 km. People line up on either side of the route to watch the procession, which is among the highlights of the annual Dasara festival in Karnataka.

The elephants, accompanied by their mahouts, kavadis and their family members, will stay in temporary shelters at the palace. They will undergo training and carry sandbags matching the weight of the golden howdah as part of their daily rehearsal for the Jamboo Savari. The training is expected to start on September 17.