By Sam Baker and Anthony Scully 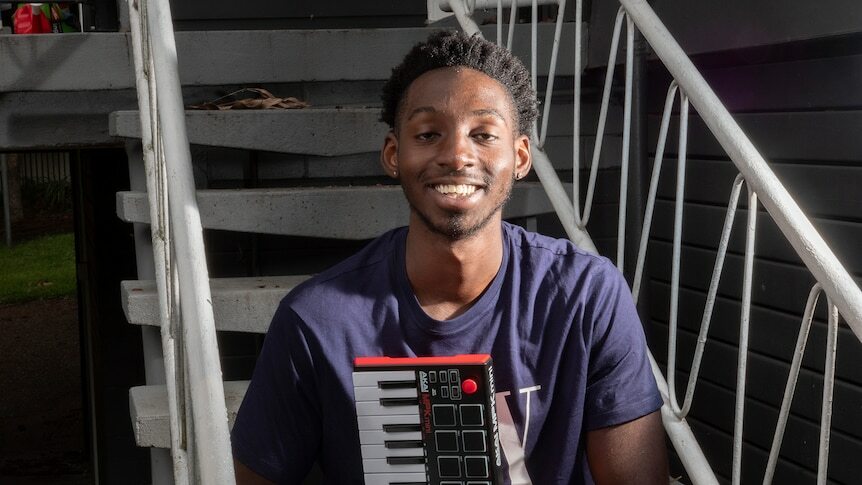 If you had knocked on 15-year-old Egrinya Adie's bedroom door as he messed around with music on his laptop and told him he would be working with some of Australia's top urban music talents within five years, he would have laughed.

"I honestly just started out of boredom," Mr Adie said.

Mr Adie, a business student at the University of Newcastle, has been consistently creating musical beats from his bedroom in Newcastle for more than two years.

With just a laptop computer and a MIDI keyboard as his trusty tools, the young artist has amassed more than a million streams of his work across his YouTube and Instagram channels under the pseudonym DatsGrinny.

At first music production was just a hobby. It was not until university that he began considering it seriously as a possible career.

This realisation came when he was first contacted by a rapper asking whether Mr Adie's beats were for sale.

"I remember it like it was yesterday," he said. "I was like, "Oh my God, this is actually happening?'"

Since that first sale Mr Adie has sold more than 100 "beats" or backing tracks used by urban music artists use to record their vocals over.

He has worked exclusively with some of Australia's biggest up-and-coming urban talents such as Fortay, Lisi, DSP, and John Charles.

Afro Australian Rapper DSP wrote his very first song Come My Way using one of Mr Adie's beats and has praised him as a producer.

"His beat choices were always so versatile," DSP said. "And his work rate is ridiculously stupid! Sometimes even pumping out six beats in one day.

"Here's the best part, I'm still yet to meet the guy and I have already made three to five tracks with his production."

And the beat goes on

Mr Adie usually spends between 20 minutes to an hour working on a single track, creating everything from drums beats, bass lines and melodies on a laptop.

His fast-paced routine allows him to create multiple tracks a day, meaning his output is consistent.

When working in a purpose-built studio facility his approach differs, often taking his time to ensure every aspect of his beat is polished.

He finds himself surprised by how artists end up utilising his beats.

"As a producer, sometimes you can't always see the vision of the entire song. It's awesome when someone can make it sound even better than what I thought it would."

Mr Adie hopes his business studies will provide him with the necessary skills to further his own brand and enterprise.

Mr Adie has plans to one day open a recording studio, where he can record with clients.

"Somewhere I can record them and make a song right there on the spot," he said.