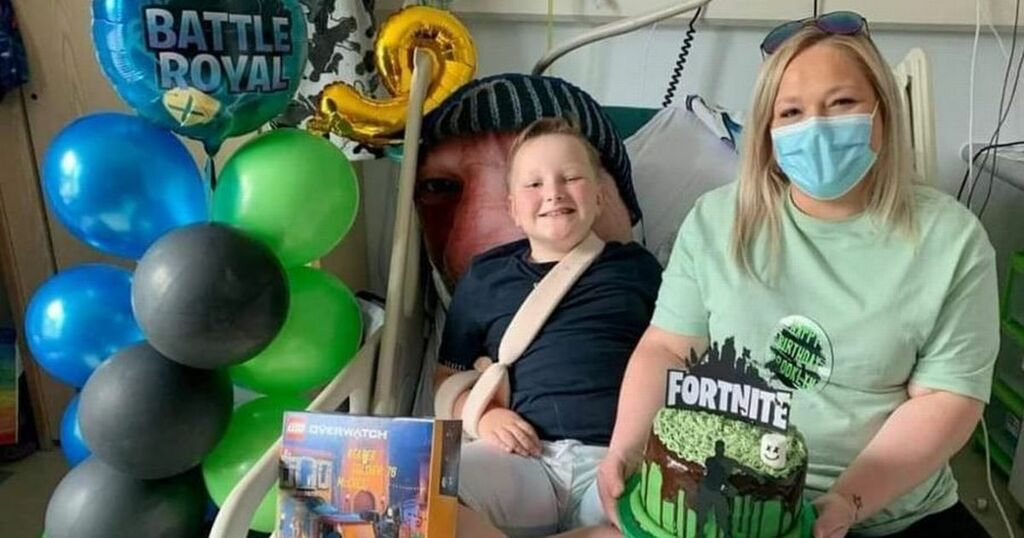 It was meant to be a day of celebration for one young family. Amy Royals had a little get together for her daughter Lylah, who was celebrating her third birthday on Tuesday, May 18 last year at their family home in Trimsaran.

Her big brother, Brooklyn May, aged eight at the time, had helped her celebrate, before then heading off to take part in rugby training for Trimsaran RFC Juniors that evening. Brooklyn was taken to training by a family friend, Annie, whose son also plays for the team, as the celebrations continued at home.

But what was meant to be a joyous day of happiness and celebration soon turned into something completely unimaginable for Miss Royals. Not long after Brooklyn had been dropped off, she received a call from her friend to inform her of some devastating news.

As he ran towards his teammates to take part in training drills, Brooklyn collapsed and fell to the floor, and was unresponsive. Coaches rushed to his aid and the news was fed through to his mum, who dropped everything and rushed to be with him.

"That moment when I saw him, it was horrible," Miss Royals said.

"It was surreal, because you'd just had your normal day, and all of a sudden, your whole life is turned upside down in seconds.

"We waited 56 minutes for an ambulance to get to him. He had a minor stroke on the field which he woke up from. When the ambulance arrived he was awake but unresponsive. They bluelighted him to Glangwili Hospital.

"I thought that he might have hit his head, and that we would be going home with a concussion. That's honestly what I thought, because he spoke to me all the way through Trimsaran and to Carmarthen, but when the ambulance pulled in, he had a major stroke. He stopped talking, couldn't react to me, couldn't speak, couldn't move."

According to the Stroke Association, childhood stroke affects around five out of every 100,000 children a year in the UK. The next day, the Trimsaran School pupil had to be airlifted from Carmarthen to Cardiff's Noah's Ark Children's Hospital where they found that he had had a blood clot which travelled through his left side causing paralysation to the right side of his body.

Brooklyn's family spent three months living at Ronald McDonald House in Cardiff whilst Brooklyn underwent two sessions of intense rehabilitation every day. He even spent his ninth birthday laid up in the hospital.

Over time, he has managed to overcome some of the adversity put in his way, regaining his ability to speak and some of his mobility, but he still has a long way to go, his mum admitted.

Miss Royal said: "He has learnt to talk again. When he woke up, he couldn't say mam, he couldn't say yes, he couldn't say no. He just couldn't speak at all. Now he can communicate. We're eight months down the line and he is talking again. They were going to send him to Stoke where he could have been seen by speech and language therapists, but with me yapping away to him and stuff, he's just done it himself.

"When he first came home, he was bed bound so everything had to be done in the bed, toilet, dressing, washing. Two weeks down the line, we were using something called a steady, to move him through places. At the start we were a bit nervous using it because we didn't want him to fall, but he got used to that and he's come on from there really.

"He has got brain damage to the top of his brain, so the thinking part has been damaged, and on the left side of his brain, they know he has got smaller stems which they have to keep an eye on to make sure they do not close up. He's got to have a scan every six months because he's also got a twist in one of the main arteries behind his throat at the back of his neck. He's on Asprin now for five years and he'll probably be on them for the rest of his life."

Miss Royals admitted that it was still tough to accept what had happened to her son.

"Every day I could be doing a random thing like washing the dishes, and it will come over me all of a sudden and I'll ask myself, how has it happened?" she said.

"He can get more tired quicker than he did before. He still can't clutch a pen using his right arm, or write with it. He can't ride his bike anymore. It's his right arm that we are trying to wake up a bit more now and hopefully it will come back. At present, if he needs to try and pull his hands in and out, it doesn't function properly."

Miss Royal said her son had shown great courage in the face of huge adversity, and added how the support of the community had been overwhelming.

She said: "He's funny, loving, caring, he thinks of others over himself all the time. He is a good little character and notices if anyone needs help, he notices kindness, he notices when people are being horrible, he's just a good boy. A lot of adults in the same situation may feel, 'Why me?', but he has just been fabulous through it all. He had intense physio twice a day for almost three months, and he never once said, 'No, I'm not doing it today'. He's just cracked on every time. He's got a good attitude. I'm very proud of him.

"At the moment, he might go and watch the rugby if they are training. He got involved once, but he can't do it all yet. He's trying. I'm hoping he will get back into it in a few months down the line.

"In terms of the support from the public, we're overwhelmed. I was absolutely overwhelmed. I still haven't got words. If I could thank every individual person I would. It wasn't just money raised through the JustGiving page, it was the messages I had. I couldn't get back to everyone. At one point my phone alerts were just going and going and going. I was getting messages which would read: 'There's no need to text me back, I just want you to know that I'm thinking about you'. I had hundreds of them, people I don't know, people I do know, the support, even now, has been amazing."