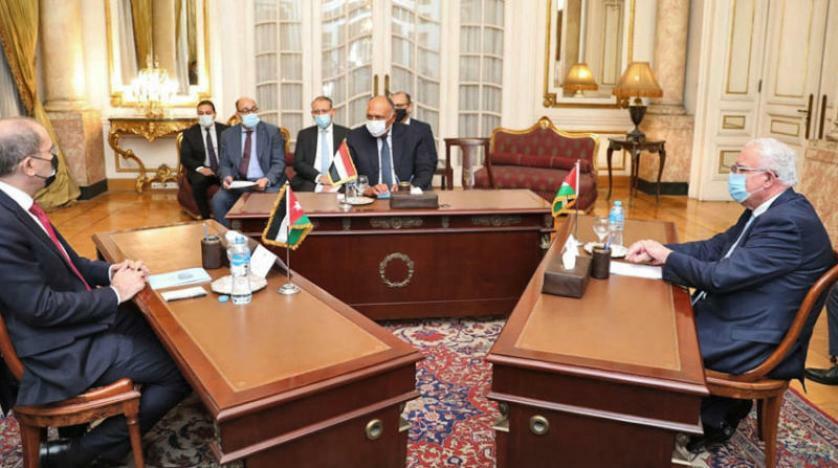 Egyptian Foreign Minister Sameh Shoukry affirmed Thursday his country’s firm stance to support the Palestinian cause and the legitimate rights of the Palestinian people.

Shoukry also urged international and regional parties to fulfill their role in providing the proper climate for pushing forward the Israeli-Palestinian peace process during the coming period.

The Minister’s stance came during a tripartite meeting held in Cairo with Jordanian Deputy Prime Minister and Foreign Minister Ayman Safadi and Palestinian Foreign Minister Riyad al-Maliki ahead of the 156th ordinary ministerial session of the Arab League Council that was later held on Thursday.

Egyptian Foreign Ministry Spokesperson Ahmed Hafez said in a statement that the meeting aimed to discuss the latest developments in the Palestinian cause and the efforts made to work on re-engagement in the peace track and launch a serious and constructive negotiating process for reaching a comprehensive and just settlement on the basis of the two-state solution that guarantees the establishment of an independent Palestinian state on the borders of June 4, 1967, with East Jerusalem as its capital.

He said both the Jordanian and Palestinian ministers praised Egypt's initiative to rebuild Gaza and provide development support to the Palestinian territories.

Thursday’s meeting also discussed the most prominent regional and international developments and stances towards a number of Arab issues, while the three ministers stressed the need to enhance joint Arab cooperation frameworks and agreed to continue their trilateral consultation in a way that achieves the interests of their countries and peoples.

Later, Shoukry said his country rejects all acts that would target the Arab, Islamic and Christian identity of the city of Jerusalem and its sanctities or change the historical and legal status quo, affirming that settlement activities in all of the occupied Palestinian territories should be stopped.