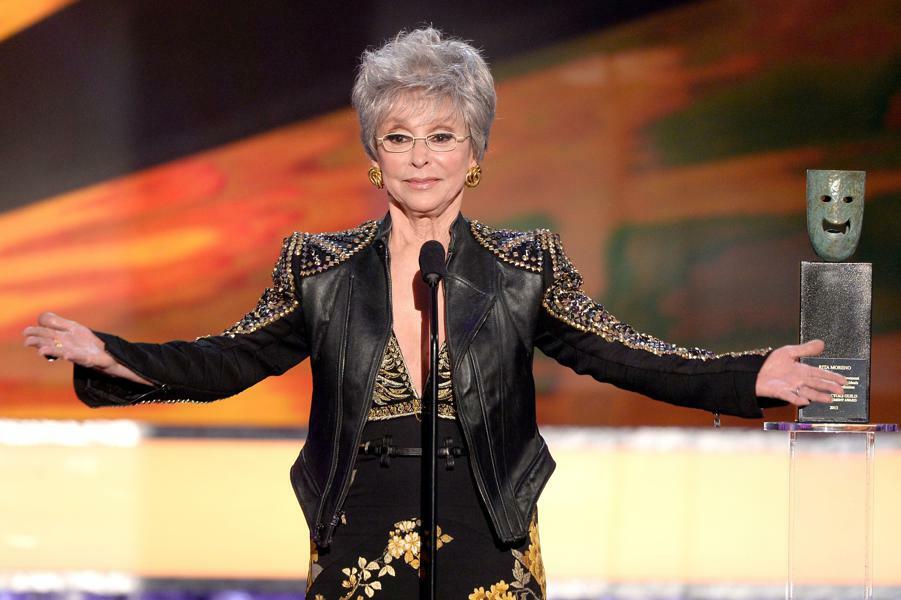 She’ s won an Emmy, a Grammy, an Oscar, and a Tony, which makes Rita Moreno what’s known as an EGOT, one of only a handful of artists to capture all of the major awards in the entertainment industry.

Now she’s getting the documentary treatment as PBS’ American Masters series presents Rita Moreno: Just a Girl Who Decided to Go For It.

The film explores the star's decades‑long career using archival and vérité footage along with interviews with Moreno. Also interspersed throughout the piece are thoughts from those close to her and performers she influenced, including Gloria Estefan, Morgan Freeman, Whoopi Goldberg, Eva Longoria and Justina Machado, as well as two of the executive producers on the project: Norman Lear and Lin‑Manuel Miranda.

It’s clear that Moreno has a lot to say, and she’s shy about saying it.

At a recent press event, right off the bat, Moreno remarks that going into participating in this project, “the most important thing for me was that if I was going to do this that I would be as honest and truthful as possible. That objective is probably one of the reasons, if not the reason, that this documentary has gotten such praise, because there's no real poop. I knew that was very, very important for me, for my own self‑respect. I didn't want on record for the rest of my life that I lied about something deliberately.”

That truth extends to her appearance in the piece, as Moreno explains, “there were a number of scenes in the documentary where I looked like a very old lady. Part of my promise to myself that I would be honest is that if I happened to not have makeup on at the time, that's the way I would film. They're not my favorite parts of the documentary. I'm vain enough to not love that a whole lot.”

Moreno, who’s probably best known for her award-winning role as Anita in the 1961 film West Side Story, says that even all of these years later, this is still her most difficult role, explaining, “I was very aware and sensitive to the fact that I was representing [Puerto Ricans] in a very, very major way. It's why I almost didn't do the film, because there was a lyric at the very beginning of [Anita’s big song] "America" that was so detrimental to Puerto Rico that, after I working so hard to get [the part], I thought I don't think I can do that lyric. The lyric was, ‘Puerto Rico, you ugly island, island of tropic diseases.’ And I began saying, ‘Oh, my God, I can't sing that. I can't do that. I can't do that to my people. I can't. I can't. But I want this part. What am I going to do?’ You have no idea how I suffered. I finally thought, I am going to have to call my agent and say that I can't do the part. I just can't do that. I can't live with that for the rest of my life.”

She says that what happened was that a few days later, new lyrics appeared, ones that read, “Puerto Rico, my heart's devotion, let it sink back in the ocean."

When this occurred Moreno’s panic over the situation abated. “You can't imagine what a relief that was, but you can also understand how I suddenly went into this hideous panic over that lyric [as well].”

Moreno explains the situation, and the impact of the song “America,” a bit more, saying, “First of all, it's the character who is dissing on America. People keep forgetting I'm an actress. I am playing the part of a girl named Anita who wants to be in America for as long as she possibly can. That's not necessarily Rita speaking. It's Anita saying, ‘I don't like Puerto Rico for these reasons.’ I think some people, those who found it insulting to America, seem to forget that this is a character saying, ‘This is how I feel.’”

Even after she picked up an numerous awards for her work in West Side Story, Moreno says that her stature in the industry was still perilous. “I couldn't get a job. I could not get a job. The very few that were offered to me were lesser gang movies and some parts as a coffee‑pourer for a Hispanic family, and it was one of the most depressing times of my life.”

She says that a famous agent actually said to her, “You know, I really can't help you, honey, because I don't think you have it."

“It was just the most awful, awful, awful thing to do to somebody like myself,” she says. “I had just won the Oscar and the Golden Globe and I didn't work because I kept turning down things that were lesser versions of West Side Story. [It was] heartbreaking, really.”

Recently, Moreno has, as she tells it, had a singularly great experience – working with Steven Spielberg on a new contemporary retelling of West Side Story.

She gushes, “It was probably one of the most thrilling times of my life,” quickly adding, “Also, let's not forget - I am an executive producer on that film. That was a big, big surprise. I didn't expect anything like that, and Steven offered it. I couldn't understand why, but I said, ‘Oh, okay.’”

Reflecting on her life a bit, Moreno admits, “I am saying, ‘Oh, my God,’ every two minutes; I really am. I'm about to be 90. In fact, on December 11th I'll be 90, and the new West Side Story opens on the 10th. I don't even know what to say about this except to say that the planets are aligned. I have no idea how this happened, but I have no complaints whatsoever.”

Moreno wanted to be sure to discuss one more important element of the documentary as she said, “[Making this] gave me a chance to understand that I think we [need to] tell women that we have value, and it's something that's very, very difficult for women to understand because they have been mistreated for so long, particularly women of color and women from other countries, but all women.”

Then, with that she laughs a little, and with great fervor, she says, “I'll shut up, which is not easy for me.”

‘Rita Moreno: Just a Girl Who Decided to Go For It’ airs on PBS on Tuesday, October 5th. Check your local listings for the exact air time in your area.