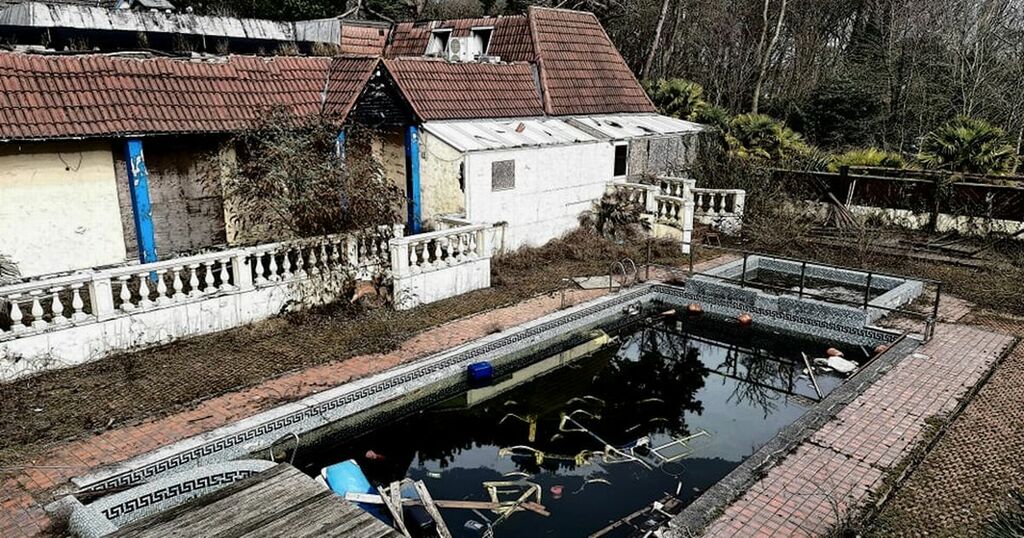 Creepy footage was captured of a derelict nightclub and spa that has been left decaying.

The former Pinetops health and beauty club in Formby, which had an adjoining country club called Shorrocks Hill which had function suites, restaurants, bars and a nightclub has been left to rot.

In the past, it was once a favourite for people wanting somewhere to wind down and relax.

The spa had leisure facilities including heated pools and multiple sauna rooms and the nightclub attached meant it was a haunt for footballer and celebrities alike.

But since its closure in 2015, the once luxurious premises, nestling in its idyllic surroundings, now lies derelict and abandoned.

Footage taken by by urban explorer Daniel Sims - known as Bearded Reality on social media - in March shows how the nightclub and spa has continued to rot as the years have gone by.

In the 27 minute video uploaded to his YouTube channel, Daniel takes a tour around the premises with friends.

The footage begins with the group taking a tour outside, with an outside pool filled with rubbish including pool chairs, a shopping trolley and containers all in blackened waters.

A former Tiki bar stands alone in the corner next to the pool with a backdrop of huge trees.

Once inside Daniel is amazed by a huge Jacuzzi and pool that is still standing and says "that's awesome" and notes "a lot of vodka" being strewn in there.

A former steam room with smashed windows and broken seats is also captured on the video and Daniel says in the video "you can still smell it kind of."

Next to the steam room is a sauna which still has the tiled seats but it appears someone has been burning papers in it.

Bizarrely one of the most strange things the Urban Explorer finds is mounds and mounds of DVDs scattered across the floor of the nightclub.

Glass has been smashed across the room and it has seen a lot of damage, however memories of the nightclub still remain with shot glasses and the pumps still there.

Speaking to the ECHO about his visit to Formby, Daniel said: "The place itself feels like you're in another country on holiday, with the palm trees and all the other stuff.

"It is generally not something you expect to see.

"First of all it is very rare that you will find an abandoned spa especially in the UK, so that threw me off a bit.

"If you look at how the place used to be it used to be quite stunning with the grounds and stuff.

"You have the attached nightclub to it as well and we found hundred of copied DVDs littering the floor."

* Individuals are not encouraged to enter private and derelict premises under any circumstances for their own safety.