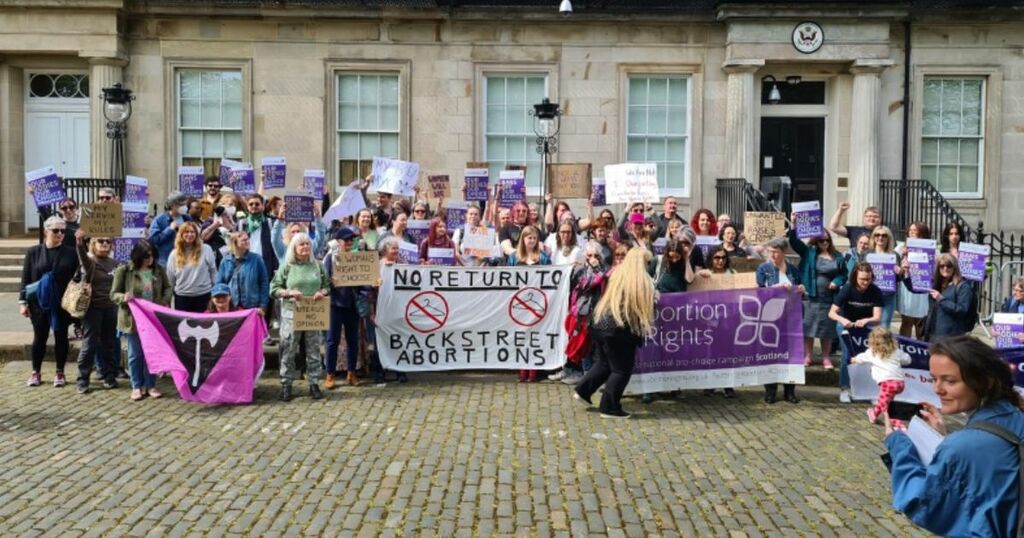 The Guardian - US
‘Solidarity with US siblings’: Activists gather in Edinburgh over Roe v Wade

A rally will be held today outside of the American consulate in the capital today (Saturday 14) to support a women’s right to choose.

The event has been organised after a leak revealed that the United States Supreme Court was considering overturning the infamous Roe v. Wade decision that was made in 1973.

The legal precedent which has existed for almost 50 years legalised abortion across the US - if it were to be reversed then it could potentially restrict access to abortion and reproductive healthcare across the Pond.

However the debate has not been confined to America with several medical clinics offering abortions being targeted across Scotland by controversial pro-life protestors.

This has led to Nicola Sturgeon offering to chair an emergency summit on reproductive rights, STV reports.

The rally will take place at around 2:00pm this afternoon on Regent Terrace in Edinburgh and will include speeches from Scottish Greens MSP Gillian Mackay, who has brought forth a member’s bill on protest-free buffer zones outside clinics to Holyrood, and Abortion Rights Scotland.

It is understood that Dr Lindsay Jaacks organised the event and that over a hundred protestors are expected to attend.

She said: “In sharing facts with colleagues in my wider network I’ve realized that many people are not aware of the harassment people are facing in trying to access reproductive healthcare services.

“Many groups will be in attendance at the rally and the floor will also be open to anyone representing an organization or from the community to speak out about their experiences or work in this area.

“My hope is that it will be an inclusive space where people like myself – an American absolutely distraught about the situation in the US – and many more can come together for comfort, solidarity and action to ensure these rights are protected and expanded in Scotland.”

The most recent demonstration in Scotland was on Wednesday outside Glasgow’s Sandyford sexual health clinic, where anti-abortion activists had stationed themselves outside.

Speaking after First Minister’s Questions on Thursday, Greens representative Mackay said the protest was the latest example of an increasing problem of intimidation outside abortion clinics.

She said: “Not only do these protests intimidate many of the people who use these services, I understand they also forced the clinic to close particular rooms on one side of the building due to the amplification system the protesters were using.

“My buffer zones member’s bill will restrict protest outside healthcare settings. It is time we ensured that everyone who needs to access abortion services can do so free from intimidation and harassment.”

Speaking about the rally, she said: “I offer solidarity to those in the USA who are facing the prospect of being stripped of the right to bodily autonomy. It is vital that we stand together against this attack on our fundamental rights, whether at home or abroad.”

Speaking about the rally, a spokesperson for Back Off Scotland, a pro-choice group campaigning for buffer zones, said: “We were really shocked to hear about the US Supreme Court leak last week, but are grateful to be able to come together as a pro-choice community to support each other and pay tribute to Gillian Mackay MSP who is soon to be launching the consultation on her buffer zone bill.

“We fully back Gillian, and are delighted to be working with her and a number of other feminist organisations to ensure that Scotland is progressive when it comes to reproductive rights, and to show solidarity with our siblings in the US.”

The Guardian - US
‘Solidarity with US siblings’: Activists gather in Edinburgh over Roe v Wade