Edinburgh Election 2022: The winners and losers of this year's council vote

With votes counted, councillors elected and negotiations underway to form a new administration for Edinburgh City Council, it's clear who the winners and losers of this year's local election are.

Falling from a close second in 2017 to the city's smallest party, the Conservatives emerged defeated after losing half of their seats in the City Chambers.

Coming third overall, the Liberal Democrats made significantly more gains than any other party, doubling their seats to 12, with a quarter of their councillors elected in just one ward.

There was also cause for celebration for overall victors the SNP, which saw no gains or losses to the 19 seats won in 2017, and for Labour which increased its seat count by one to 13.

The Greens now have 10 councillors and despite remaining the second smallest party, the two extra seats picked up this year – which has given them a lead over the Tories for the first time – is seen as a huge achievement by all within the party.

In Almond, the Lib Dems gained a seat from the Tories and made history by winning three out of four seats – something never before achieved in Edinburgh. The party's share of first preference votes (FPv) rose to 60 per cent with Lib Dem incumbents, siblings Kevin Lang and Louise Young, elected in the first two rounds of counting. The SNP's Norrie Work was also re-elected on FPv, and third Lib Dem candidate Lewis Younie comfortably won the final seat, ahead of the Conservatives' James Hill by more than 1,000 votes.

Cllr Younie said: "I cannot express in words how grateful I am to the people of Almond Ward for putting their trust in me. Also, Kevin and Louise - thank you for all the patient, wise and incredible mentoring. I will be forever grateful."

The Conservatives suffered another loss in the neighbouring three-seat Pentland Hills ward, where they were defending two seats. Whilst SNP councillor Neil Gardiner and the Conservatives' Graeme Bruce were re-elected in the first round, the battle for the third seat was closely fought between the two parties – SNP candidate Fiona Glasgow was a mere 14 votes ahead of the Tories' Emma Gilchrist in the final stage of counting.

Cllr Neil Gardiner added: "Thanks to voters of Pentland Hills who elected Cllr Fiona Glasgow and re-elected me to serve all communities and constituents of this diverse and wonderful ward in Scotland’s Capital City at The City of Edinburgh Council It’s an honour and privilege representing you all."

There was more disappointment for the Tories in Drum Brae/Gyle. Mark Brown, a councillor there since 2017, failed to hold onto his seat after trailing behind Lib Dem candidate Ed Thornley by over 900 votes. Cllr Thornley now joins Lib Dem group leader Robert Aldridge and the SNP's Euan Hyslop in representing the ward.

Ruth Davidson, former leader of the Scottish Conservatives, took to Twitter to praise Mr Brown's work as a "great councillor" over the last five years.

Cllr Thornley said: "A massive thank you to residents in Drum Brae/Gyle for their trust in me.

"I’m really looking forward to getting stuck in - the hard work starts here!"

The Lib Dems also gained a gained a seat in Forth where candidate Sanne Dijkstra-Downie got 19.7 per cent of FPv, up from 7.8 per cent in 2017. Labour group leader Cammy Day was re-elected, whilst the SNP held onto one of the two seats it previously held in the ward. Facing off in the final stage was the Greens' Kayleigh O'Neill and Jim Campbell from the Conservatives. But after Mr Campbell's share of FPv almost halved compared to the 2017 result, Cllr O'Neill sat 362 votes ahead and took his seat.

Cllr O'Neill said: "I didn't think it was going to be between me and the Tories in the last minute but I guess folk just know the Greens are what they wanted."

Cllr Dijkstra-Downie added: "Thank you to everyone who placed their trust in me across Forth Ward. I’m honoured, elated (and a little bit tired..!) but so excited to get started and so thrilled to be joined by 11 other fantastic Lib Dem colleagues."

In Inverleith, the Tories held onto one of the two seats it was defending as Max Mitchell was re-elected. After the Lib Dems' Hal Osler and SNP's Vicky Nicholson were elected, it was a tight race for the fourth spot between the Greens' Jule Bandel and the Lib Dem's second candidate Malcolm Wood – with Cllr Bandel just 46 votes ahead in the final stage of counting.

She said: "So thrilled and deeply honoured to have been elected as a Green councillor for Inverleith ward - thank you for putting your trust in me! I cannot wait to get stuck in and make our city a fairer, greener place with our brilliant new team of Edinburgh Green councillors."

The trouncing of the Tories – and revival of the Lib Dems – continued in Corstorphine Murrayfield; Lib Dem candidates Alan Beal and Euan Davidson were elected in the first and fourth round respectively, whilst the Conservatives failed to defend their seat after topping the poll in 2017. Former Lord Provost Frank Ross will continue to serve as a councillor for the area after passing the vote quota in the sixth stage of counting.

Cllr Davidson said on Saturday the Lib Dem group had had a "brilliant first group meeting" and added: "Now the hard work starts."

Meanwhile, in Sighthill/Gorgie, SNP incumbents Denis Dixon and Catherine Fullerton were both re-elected alongside Labour's Ross McKenzie, who has taken over from Donald Wilson, ex Lord Provost and until recently chair of the communities committee.

Ashley Graczyk, who was elected as a Tory councillor in the ward in 2017 but resigned from the group the following year, stood for re-election as an independent candidate and got 797 votes. However new Tory candidate Mark Hooley didn't manage to hold onto the seat as Dan Heap secured another gain for the Greens after being 267 votes ahead of Mr Hooley in the final round of counting.

Cllr Heap said he was "humbled" to have been elected and added: "Thanks to all who helped me and voted for me. "

In Colinton/Fairmilehead, seats were held by the Conservatives' Jason Rust and Labour's Scott Arthur, who was elected in the first round with almost 1,000 votes to spare. The third spot, being defended by the Tories, ultimately went to the SNP's Marco Biagi after facing off with the Lib Dems' Louise Spence in the final round with 284 votes between the two candidates.

Cllr Biagi said: "I'm honoured and overjoyed to be elected as SNP councillor for Colinton/Fairmilehead. Edinburgh is today backing progressives of many shades and rejecting an out-of-touch Conservative Party. Thanks to all who voted for me. I look forward to repaying your trust."

The only Green loss and Labour gain of the Edinburgh Council election came in Fountainbridge/Craiglockhart. Labour's share of FPv rose from 13.84 per cent to 22.4 per cent as Val Walker secured a seat for the party in the fifth stage. Christopher Cowdy successfully defended the Conservatives' seat and it was between the SNP's David Key and Greens' Megan McHaney for the third spot, with the former candidate 120 votes ahead in the final count.

Cllr Key said: "Absolutely delighted to have been elected to represent the good people of Fountainbridge and Craiglockhart again. Huge thanks to everyone who voted."

Despite no change to the political make-up of Morningside, with Green, Lib Dem and Labour candidates all elected in the first round, the SNP came close to gaining a seat here after being 186 votes behind the Tories in the final stage.

And the City Centre ward, whilst seeing no change to the parties its represented by in the City Chambers, also proved how close local elections can be. Very nearly winning another seat for the Lib Dems, Andy Foxall trailed Labour's Margaret Graham by just 18 votes in the final stage.

In Leith Walk, Jack Caldwell gained another seat for the Lib Dems as former SNP finance convener Rob Munn failed to get re-elected. Meanwhile, the SNP's Amy McNeese-Mechan and Greens' Susan Rae were voted in again.

Cllr Caldwell said it was the "honour of my life" to be elected as a councillor "for the community I live, work, volunteer and breathe".

He added: "I won't take this for granted There's a lot of work to crack on! I'll fight everyday for better pavements, social-rent and cleaner streets."

SNP group leader Adam McVey paid tribute to Mr Munn following the result, describing him as "the nicest man in politics" and "an outstanding Councillor for Leith Walk".

Cameron Rose, a councillor for Southside/Newington since 2007, was also unsuccessful in his re-election bid with the Lib Dems' Pauline Flannery 177 votes ahead in the final stage of counting. SNP, Green and Labour all held seats in the ward.

Mr Rose said: "The electorate has spoken. It has been pleasure and privilege to serve as local councillor."

Cllr Flannery said: "So proud to be your elected Councillor for Southside Newington.

"Thank you for your support, warm wishes and robust responses on the doors. Keeping it local, keeping it relevant for all our communities in Southside Newington. Onwards and definitely upwards." 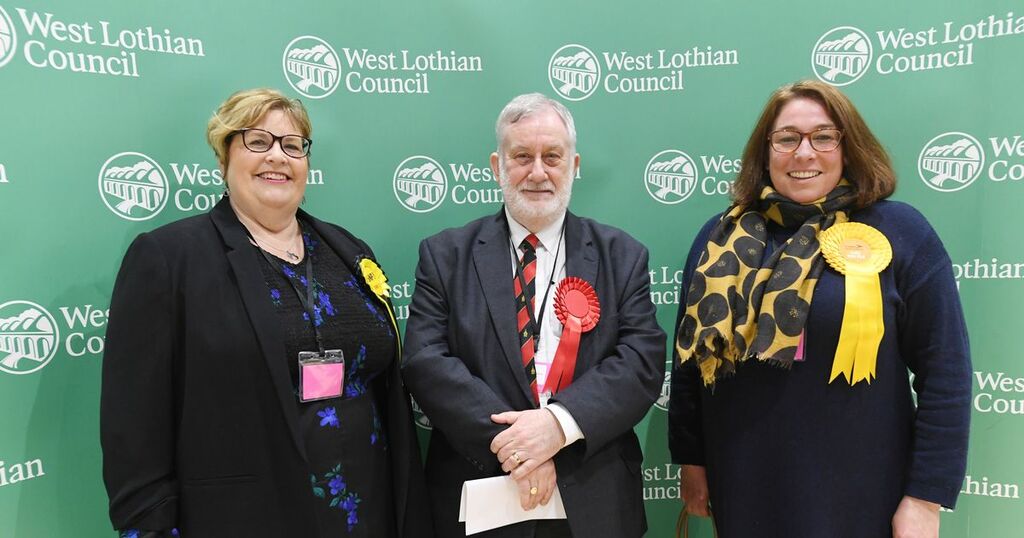 Coalition talks are ongoing following Thursday's election, with a range of outcomes between parties still possible.