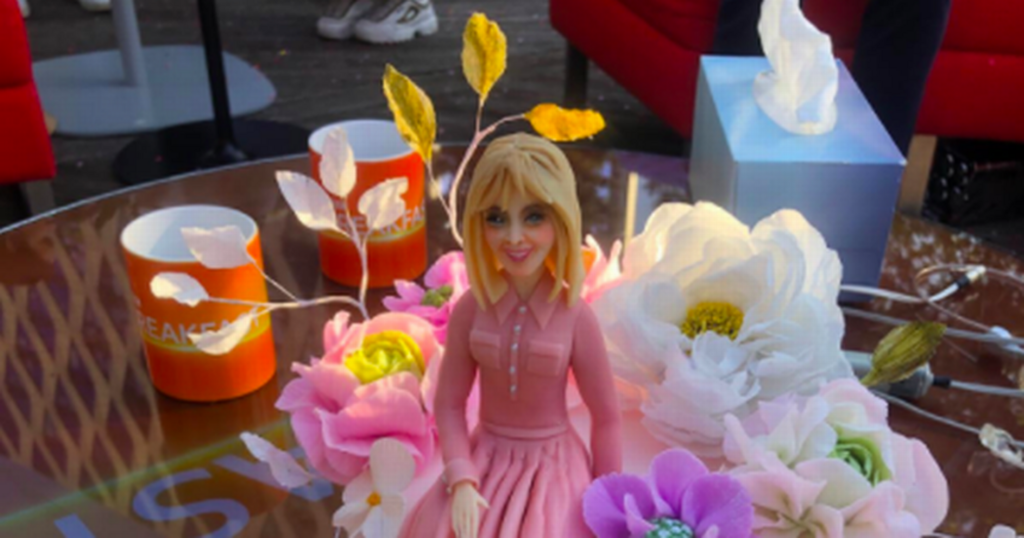 An Edinburgh cake company was behind an impressive baked tribute to Louise Minchin on her last day of presenting on BBC Breakfast.

3D Cakes in Edinburgh spent around sixteen hours creating the sugar flower and sugar figurine masterpiece that was presented to Louise live on the show on Wednesday morning.

Minchin battled with tears throughout her final programme but retained her composure during her farewell address.

David, who drove the finished cake to Salford to present it to Louise live on the show, told of the incredible work that went into making the creation which looks just like a mini version of Louise.

Speaking exclusively to the Daily Record, he said: "The cake took around sixteen hours to complete due to the detail on the sugar flowers and sugar figurine.

"The flowers are made from sugar florist paste and wafer paper and the figurine was done over a magnifying table to work on really small details over Louise's face.

"The cake was a toffee with white chocolate ganache and we made it for Louise after the show contacted us."

He added: "They just approached us. We had made cakes for the Royal family with The Queen and Prince Charles so had connections with the show from that and they asked if we would create something special for Louise."

"I'm just driving back to Edinburgh now. We had to drive it to the show carefully and put it back together to present it."

The company which has been making cakes since 2007, when a then 22 year old David quit his job in IT, have also made cakes for fashion brands Chanel and Dior and were labelled "Royal Baker" after completing another show stopping cake for Princes Charles' Commissioning of HMS Princes Of Wales.

They also create a replica of HMS Queen Elizabeth Aircraft Carrier which David presented to HM The Queen at the commissioning ceremony for the ship in Portsmouth.

Cakes with sugar flower costs around £195 per figure from the company but cost extra for more animation and detail.

The added flower displays cost between £250-400 based on time.