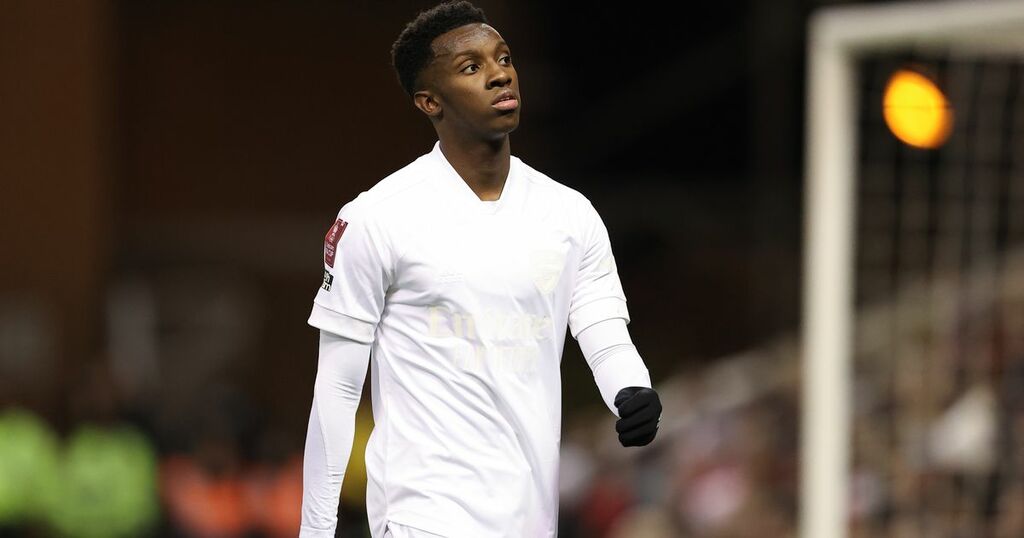 Crystal Palace have reportedly begun talks with Arsenal over a deal to sign Eddie Nketiah.

The 22-year-old forward started for the Gunners in their recent FA Cup defeat to Nottingham Forest but has been limited to just three appearances in the Premier League this season.

Nketiah is said to have turned down a new contract offer to stay at the Emirates Stadium in favour of finding regular football, with Arsenal worried they could lose him on a free when his current deal runs out this summer.

Palace have been interested in Nketiah for some time, and reportedly had a £12million bid for him rejected during the last transfer window before opening talks again this month.

So how did we get to this point? We’ve gone through some of the key angles of the potential transfer below.

Palace have had Nketiah on their radar for quite some time, as revealed by Roy Hodgson during his guest spot on Sky Sports’ Transfer Show last week.

The former Eagles boss said the club had been monitoring Nketiah for "a number of years let alone months" and that the young striker was someone who "everyone at the club admired very much."

When Patrick Vieira arrived as manager last summer one of his targets in the transfer window was to bolster the squad's attacking options, which he managed to do with Celtic's Odsonne Edouard and Reading's Michael Olise both arriving.

Palace reportedly had a bid for Nketiah rejected at this time, with Vieira saying after the window was shut that the club had wanted to do more business but couldn't, leaving them "a little short in places."

Whether Palace will be able to agree on a deal for Nketiah this time around remains to be seen, but if he does sign for the Eagles it'll be a deal that's been in the making for years.

The view from the Emirates Stadium

Nketiah came to Arsenal as a youth player in 2015 after being released by London rivals Cheslea, where he had started his career aged nine in 2008.

He's since made 72 appearances for the Gunners in all competitions and scored 18 goals, and had a good half-season loan spell in the Championship with Marcelo Bielsa's Leeds United as they gained promotion to the Premier League as champions.

It's clear from Arsenal's side of things that they would rather keep hold of Nketiah, despite his lack of game time for them this season.

They are said to have put a £20m price tag on him last summer which kept most of his suitors away, though have been set back by his refusal to sign a new deal in north London.

After his Carabo Cup hat-trick against Sunderland in December, Mikel Arteta reaffirmed his commitment to trying to convince Nkeitah to stay with the Gunners.

"I tell you every day that we want to keep Eddie," he said. “We are trying (to persuade him to stay). It’s not about anything else but minutes. He wants game time, he wants to be on that field and that is the only reason to say ‘can I do it here?’ That’s the question. We all want him to stay.”

Despite the manager's insistence on the matter though, the fact that Arsenal have been willing to listen to offer for Nketiah shows they likely think he won't change his mind on a new contract during the second half of the season, and that cashing in on him now might be the sensible option.

If Arsenal do decide to sell to Palace, having Vieira in charge in south London will no doubt have played a small part in helping the Eagles pull off a deal.

The Frenchman was coy when asked about the club's interest in Nketiah last week, praising the Arsenal striker without going into further detail about a possible move.

In his appearance on Sky Sports last week, Hodgson said Vieira's status in the game as an Arsenal great could only be a benefit to Palace's attempts to sign the player.

Vieira has also shown he has a good track record of working with young players. At New York City he helped bring through current Leeds star Jack Harrison while at Palace some of this season's brightest performers - Conor Gallagher, Marc Guehi, Michael Olise - have been the youngsters.