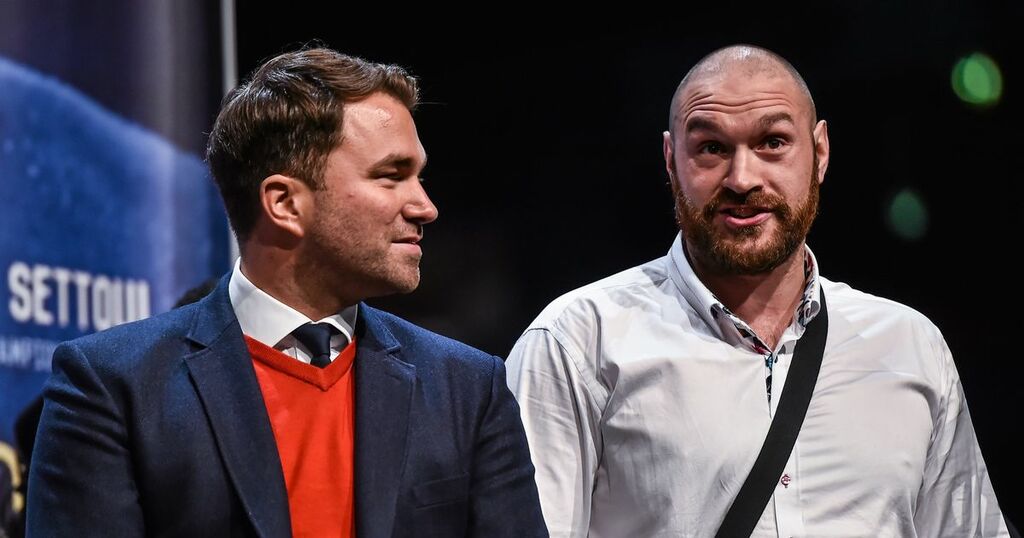 Eddie Hearn has hit back at Tyson Fury's foul-mouthed comments towards him, joking that he has as many title defences as the Gypsy King.

Matchroom Boxing boss Hearn, who oversees the careers of Fury's rivals Anthony Joshua and Dillian Whyte, has said that he is unsure if his trilogy fight with Deontay Wilder for the world title will go ahead on October 9 after a number of cancellations.

The bout was originally set for the summer of 2020, before the coronavirus pandemic shut down all boxing for the best part of the year.

And then they set a July 24 date after Wilder brought forward an arbitration case that stopped a potential Fury vs Joshua undisputed title fight from happening.

But when Fury's camp was hit with a coronavirus outbreak, he was forced to move the date, with the fight now expected on October 9.

"I think he called me a Souther t*****, which is fair enough," Hearn joked during an interview with Boxing Social.

"They're struggling to sell that fight, nobody's really interested in that fight, no-one's talking about it, it's four weeks away or something like that.

"You cannot speak with any confidence that a fight with Tyson Fury is going to take place, we know it's not selling.

"You only have to speak to people in the industry and the fact is, they're not going to get the money together that these guys want."

And Hearn also took the chance to fire one of the more common shots Fury has received throughout his career, mocking him for his lack of heavyweight title defences after triumphs over Wilder and the legendary Wladimir Klitschko.

"But he and I have one thing in common, we both have the same amount of world heavyweight title defences, which is zero.

"He should concentrate on his own career and try to build on the great work he's done by building a legacy with championship defences."

Hearn has said that he wants Fury to beat Wilder, in the hopes that an eventual undisputed clash between the two British rivals can take place following his fighter's defence against Oleksandr Usyk.

"Do I think it'll happen? It's a coin flip," Hearn added. "Who knows? The first time, I thought there's no chance it's going to happen but this time it's a coin flip.

"I hope it does happen and I hope he wins and I hope Joshua beats Usyk and I hope they meet in the undisputed fight."

Fury has promised to fight both Joshua and Whyte within the next year, telling BT Sport that he plans to take on Whyte before the year is out.

“It will be Wilder October 9," Fury explained. "Whyte in December in a stadium somewhere when I will shut him up - that's an easy one!

"Then it's Joshua in March in Saudi Arabia, then a rematch back here in Wembley."