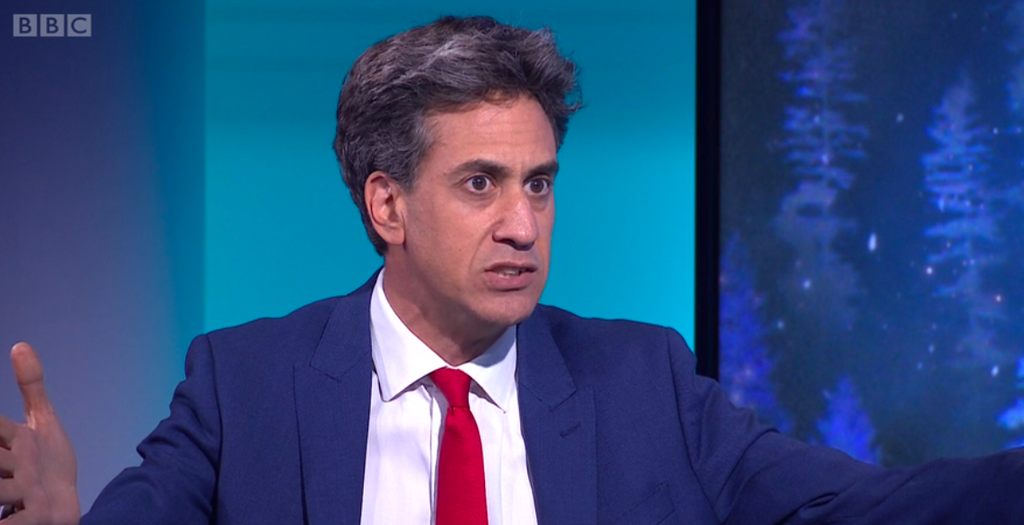 Speaking ahead of the UN Climate Change Conference of the Parties (COP26) at the end of October, former climate change secretary, Miliband said that despite President for COP 26 Alok Sharma MP being a “good guy”, the Prime Minister needs to step up in preparation of COP26.

“The things you’ve got to understand about these summits, with the host of this summit, your success and your ability to manage the summit depends on your moral authority,” Labour MP Miliband said.

“What we’ve seen this year, I’m afraid, is perilous and an absence of leadership, so when you cut overseas development aid and you’re the only G7 country to do it, vulnerable countries, poor countries look at you and say ‘are you serious? Are you serious about what you’re trying to do?’

“Right the way along we’ve seen an absence of leadership.

“Now, I don’t despair, this summit has got to succeed and it isn’t too late but there are some things that the prime minister has got to do, and the first thing is you can’t just leave it to Alok Sharma.

“He’s a good guy, Alok Sharma, but this is about a prime minister, he’s got to take charge of this in the next two months.”

To highlight the immediacy of the climate emergency, Milliband said we have to halve global emissions in this decade.

Comparing Johnson to former PM Gordon Brown at the Copenhagen summit, he said Brown took charge to try and get something positive out of “the wreckage of that summit.”

He continued: “Him, Raab, Sunak, they’ve all got to step up. This has got to be cross-government and it hasn’t been so far.”

Miliband also reiterated that Labour is in favour of common ownership of energy, water and transport.

“Keir Starmer said in his leadership campaign he was in favour of public ownership in those areas, we haven’t changed that commitment.

“In particular in relation to natural monopolies, if we’re going to make this green transition then public ownership is the right way to go. We don’t resile from those commitments.

Emily Maitlis asked: “So we may see the Labour front bench voting in favour of —” and Milliband interrupted enthusiastically to say “we may well see that but it’s always messy, these things.”

This report from @GreenAllianceUK cuts through the government's greenwash and exposes them for the climate delayers they are. With the crucial COP26 summit round the corner, the UK needs to lead at home to enable leadership abroad.https://t.co/wPrKCVhqeo

Many were impressed with the passion and emotion that Miliband displayed during his appearance on the show.

On Newsnight tonight @Ed_Miliband committed to net zero by 2030, working with unions and public ownership of essential services.

Just imagine if Miliband said this in 2015 instead of supporting austerity and opposing public ownership.. he might have ended up as Prime Minister! pic.twitter.com/9uQqskYddO

Say what you want about Ed Miliband, but the man is far more passionate, empathetic and erudite than his Tory counterparts. #newsnight

"In relation to natural monopolies, if we're going to make this green transition, then public ownership is the right way to go"https://t.co/z1iQQPN12U

Also speaking on Newsnight was Emily Shuckbrough, Director of Cambridge Zero who said climate scientists have been trying to “ring the alarm bell” for more than three decades and sadly we’re now starting to feel the effects of climate change.

Shuckbrough said: “There are not many global catastrophes that we can predict - this is one of them and even more, it’s entirely preventable so that’s why it’s so critical that our global leaders really do lead.”

Green Party MP Caroline Lucas said she feared “we’re on the trajectory of throwing this conference away.”

Lucas said: “The consequences of throwing this conference are hardly contemplatable in the sense that we are talking about consigning many millions of more people to absolutely compromised livelihoods, we are looking at more death and destruction across the globe, we are looking at an environmental catastrophe.”

However, a Conservative MP Jerome Mayhew disagreed and said we’ve had “huge leadership” from the Prime Minister and he said Alok Sharma is doing “a great job.”

Mayhew cited the Agriculture Act and Environment Bill as examples of ways the government is taking steps towards a greener future.

The COP26 summit will take place between October 31 and November 21 in Glasgow.