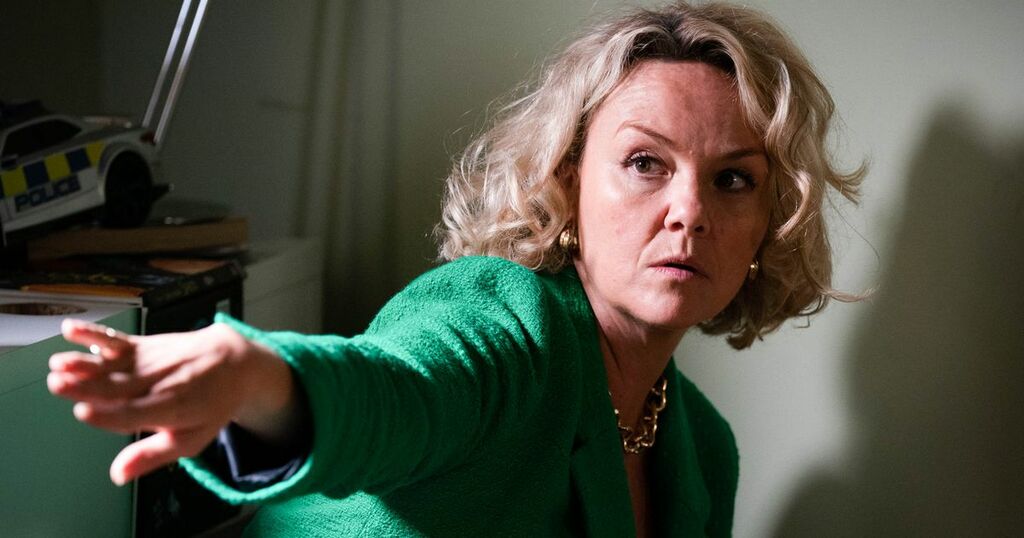 After Friday’s cliffhanger, lives are in danger on EastEnders next week.

After Shirley Carter battered Phil Mitchell with a baseball bat and Janine Butcher scuffled with daughter Scarlett and her half-brother Tommy, a fire has broken out at the Mitchells’.

Elsewhere, Jean Slater enlisted Shirley to help her get rid of a large amount of cannabis in her garage, as Ruby Allen feared Jean would expose her lies.

Finally, Linda Carter feared that Jack Branning and Rainie Highway could be on to her secret surrounding the parenting of her child.

Albert Square will certainly never be the same again after next week.

Here’s all you need to know about the drama coming up in Walford.

As next week kicks off, the fire at Phil Mitchell’s house grows as he lies unconscious after being hit with a baseball bat by Shirley Carter.

Upstairs, Janine Butcher confronts daughter Scarlett and her half-brother Tommy Moon in the latter’s bedroom but he locks them all in.

Soon they realise that a fire has broken out and they need to retrieve the key that Tommy has dropped through a crack in the floorboards.

Phil soon comes round barely conscious as flames rise around him and he can’t breathe.

As Phil’s son Ben Mitchell and husband Callum Highway notice the fire outside, they approach when an explosion rips through the house.

As the fire rages, old enemies Gray Atkins and Kheerat Panesar have a confrontation over the anniversary of Chantelle Atkins’ death when they spot the fire and team up to get involved in the rescue effort.

Who will survive the deadly blaze?

Jack Branning continues to push Linda Carter to reveal whether or not his brother Max Branning is the father of her unborn child.

However, as Linda vehemently denies Max is the father of the child, her waters break.

Has all the stress and commotion put the baby in danger?

Later in the week, Mick Carter learns from mum Shirley that she hit Phil with a baseball bat.

Meanwhile, Rainie Highway continues in her quest to become a mother to her husband Stuart’s child as they attend surrogate Bernie Taylor’s baby scan.

However, Rainie has Max Branning still on her mind as she wants baby Abi back at any cost.

Tiffany Butcher is still reeling after learning that husband Keegan Baker cheated on her with her supposed friend Dotty Cotton.

Next week, the tensions in the house continue as Tiff spots Dotty wearing her top.

Tiff tells her aunt Sonia Fowler to choose between her and Dotty on who should stay in the house.

Later, Tiff and Sonia go to a boxercise class at the gym and soon Sonia has a new admirer in newcomer Ethan.

However, the class takes a turn for the worse when Dotty turns up and trainer Nancy Carter pairs them all up.

Tiffany approaches Dotty and is ready for a face-off with her love rival.

As things turn physical, Tiff punches Dotty in the stomach and a fight forces Sonia and Nancy to break the girls up.

Tiff flees and Sonia follows her, later revealing to a pleased Tiff that she has a date with Ethan.

Despite her glee, Sonia’s father Rocky Cant is less than delighted with his daughter’s new love interest.

After the fire, Shirley Carter tells pal Jean Slater that she fears she caused the blaze and when the police turn up fears the worst.

However, it is Jean who gets arrested for a possible drug offence.

When being questioned at the station, Jean refuses to talk about the large amount of weed in the Slater garage and when she stands to leave she collapses.

Later, Jean’s granddaughter Lily Slater reveals to dad Martin Fowler that she got the weed confiscated at school from the garage and also reveals that step-mother Ruby Allen knew about it.

A confused Martin then spots a text on Ruby’s phone that thanks her for her coopration and informs her of the arrest related to the drugs.

Martin realises that Ruby is the one who shopped Jean to the police.

Stacey Slater returns as she is visited in prison

An angry Martin decides to pay a visit to his ex-wife Stacey Slater in prison.

Confessing that he has messed the situation up, Martin informs Stacey about what has happened between Jean and Ruby.

A furious Stacey tells Martin to fix the situation with Ruby or she will kill her for what she has done.

How far will Stacey go to protect her mother?

At the police station, Jean refuses to talk but then makes a decision when the police tell her she can perhaps go free if she names the dealer she would have supplied the drugs to.

While Jean faces her legal fate, Martin returns home to his wife Ruby who has just welled up in tears after completing a pregnancy test in private.

Martin wants answers from his wife about what has happened and why she has been lying to him.

Ruby then finally decides to come clean to her husband and admits that she framed Stacey for pushing her down the nightclub stairs and causing her miscarriage.

What will happen to Martin and Ruby’s marriage in the aftermath of this revelation?

What are you most excited for on EastEnders next week? Let us know in the comments below.