United Nations agencies have warned swarming locusts could cause a “major hunger threat” in East Africa as at least nine countries face the worst outbreak of the voracious insects seen in the region in 70 years.

Kenya, Somalia, Ethiopia and Uganda have been battling the swarms for weeks, while swarms have also been sighted in Djibouti, Eritrea and Tanzania.

A small group entered Congo, marking the first time the insects had been seen in the Central African country since 1944, the UN Food and Agriculture Agency said.

The FAO said mature locusts, carried in part by the wind, arrived on the western shore of Lake Albert in eastern Congo on Friday near the town of Bunia.

Desert locusts have a reproduction cycle of three months. Photo: UNFAO via AP

“Needless to say, the potential impact of locusts on a country still grappling with complex conflict, Ebola and measles outbreaks, high levels of displacement, and chronic food insecurity would be devastating,” the UN officials said in the joint statement.

The swarms also recently reached South Sudan, a country where roughly half the population already faces hunger after years of civil war.

Locust swarms can reach the size of major cities and can destroy crops and devastate pasture for animals.

Experts have warned the outbreak is affecting millions of already-vulnerable people across the region.

Uganda’s Government said on Tuesday it was trying to contain a large swarm and would need more resources to control the infestation that had spread to more than 20 districts in the north.

Soldiers have been battling swarms using hand-held spray pumps, while experts say aerial spraying is the only effective control.

The UN recently raised its aid appeal from $76 million to $138 million, saying the need for more help was urgent.

“This funding will ensure that activities to control the locusts can take place before new swarms emerge,” the UN officials said, noting to date only $33 million had been received or committed.

‘The time to act is now’

Experts warn the number of locusts, if unchecked, could grow 500 times by June, when drier weather is expected in the region.

“WFP has estimated the cost of responding to the impact of locusts on food security alone to be at least 15 times higher than the cost of preventing the spread now,” the UN officials said in the statement.

A changing climate has contributed to this outbreak, as a warming Indian Ocean means more powerful tropical cyclones hitting the region.

A cyclone late last year in Somalia brought heavy rains that fed fresh vegetation to fuel the locusts that were carried in by the wind from the Arabian Peninsula.

Desert locusts have a reproduction cycle of three months, the UN officials say, and mature swarms are laying eggs in vast areas of Ethiopia, Kenya and Somalia, “many of which are already hatching”.

“In just a few weeks, the next generation of the pests will transition from their juvenile stage and take wing in a renewed frenzy of destructive swarm activity,” the joint statement said.

This is a time when farmers’ crops begin to sprout, which could devastate East Africa’s most important crop of the year, the UN officials said.

“But that doesn’t have to happen,” they said. “The window of opportunity is still open. The time to act is now.” 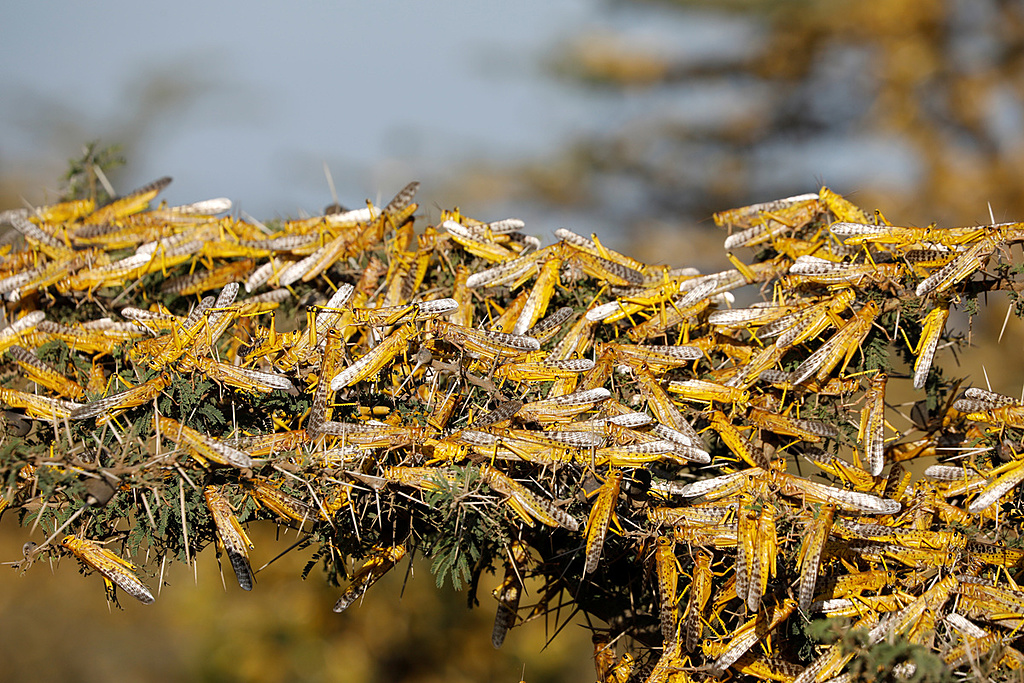 Running out of time: East Africa faces new locust threat
Countries in East Africa are racing against time to prevent new swarms of locusts wreaking havoc with crops and livelihoods…

Outbreaks of insect pests and insect invasions are on the rise on the African continent.

Swarms the size of cities can consume enough vegetation every day to feed 81 million people.