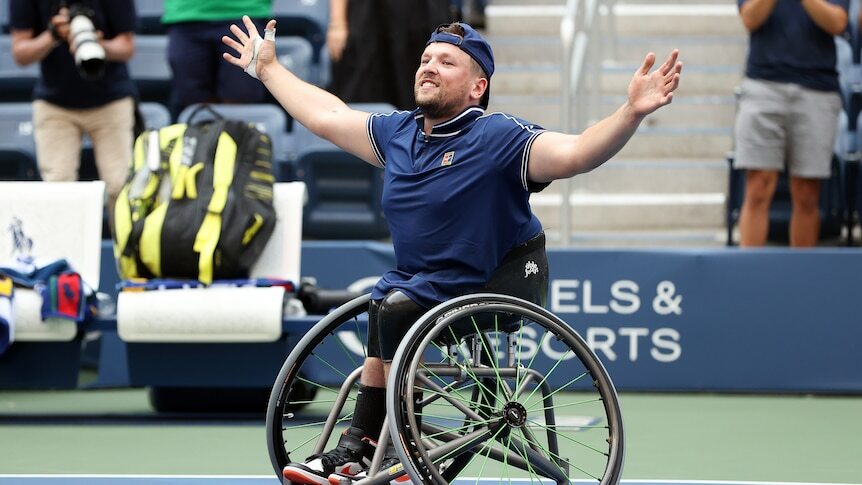 It was fitting that when Australia's Dylan Alcott clinched the US Open quad singles title to complete the first men's Golden Slam in tennis history, he did so on a big stadium court at Louis Armstrong Stadium in Flushing Meadows.

For the Greatest Showman, the man who made wheelchair tennis box office, it was the ultimate success that capped what has been an incredible career thus far.

By a mix of timing, talent and sheer force of personality, Alcott has come to dominate the sport for much of the last decade.

Alcott has become more than just a wheelchair tennis and basketball player — he is a ubiquitous presence through his radio and TV presenting gigs, his ad campaigns and his general popularity with the public.

But the larger-than-life persona is backed up by a ruthless determination and an eye-popping range of skills on-court.

The movement, the anticipation, the fearlessness to go for his shots — and in particular, his backhand that can switch from a viciously spinning drop-shot to a pin-point overhead put-away, all with a perfect technique that is his own.

There is a tendency in wheelchair tennis for champions, once they are established, to take all before them until a challenger gets the best of them. Before Alcott in quad tennis, the man to beat was American David Wagner.

Since Alcott's breakthrough win at the 2015 Australian Open, the Australian has now won 15 grand slam titles — only three majors in that time have been won by people other than Alcott, each time at the US Open.

Alcott great, but Vergeer's the GOAT

One thing to get straight first up — Dylan Alcott may well be the greatest (or one of the greatest) men's players in wheelchair tennis history.

On the numbers, however, he is not the greatest wheelchair tennis player ever.

That honour clearly falls to Dutch superstar, Esther Vergeer, who went for 10 years, and a crazy 470 matches without losing a singles contest — in that streak, she double-bagelled opponents (won 6-0, 6-0) 95 times. She won 120 tournaments in that time and 21 major titles.

Extending that a little — between 2002 and 2012 there were 37 tournaments held between the Australian Open, French Open, US Open, the Wheelchair Tennis Masters and the Paralympics Open division in women's singles.

Alcott's record can't match that, but then Vergeer doesn't also have a Paralympic gold and silver in wheelchair basketball.

Greg Crump is an Australian wheelchair tennis coach, who has been involved the sport for more than three decades, since it was merely a recreational sport rather than a professional one.

He did a coaching course in America in 1986 on wheelchair tennis, and brought the ideas back, working with the Austin Hospital's spinal unit in Melbourne. He got some funding for a few coaching hours a week from the Australian Tennis Foundation.

In Australia's Bicentennial year of 1988, there was funding to set up an international wheelchair tennis tournament involving athletes from America and elsewhere at Melbourne Park — it proved a starting point for Australian greats such as David Hall and Daniela di Toro.

"That was the start of the big push for the sport," he says.

At the time there were 8-10 ITF wheelchair tennis tournaments a year worldwide. Now there are 165.

"I remind younger players where we came from, it's important to remember those who came before.

"A few years ago, there weren't any grand slams (events for quad tennis).

"If he (Dylan) had come around more than six, eight years ago it would have been a lot tougher for him."

From early days, Alcott was a hard person to ignore.

He was a promising junior player, who made the final of the under-18 boys' wheelchair singles at the Australian Wheelchair Open and won the doubles — with friend and partner Heath Davidson — when he was just 11.

When he was 13, he represented Australia's junior team in the World Team Cup, the equivalent of the Davis Cup.

But at 14, he was introduced to wheelchair basketball, and that led to two Paralympic Games on the Australian team, the Rollers, winning a title in 2008 and a silver medal in London in 2012.

"Even when he first emerged as a junior, at 12 years old, he was always a larger than life personality," Crump says.

"He was tough to keep in his room and in his bed! Dylan was a social butterfly, and he always wanted to be part of everything."

Alcott has referred to himself growing up as a "fat kid", and his natural talent as a junior was balanced by his slowness in getting around the court.

"When he made the transition to wheelchair basketball, that was the best thing that ever happened to him," Crump says.

"He got fitter and faster — when he came back to tennis, it meant he could get there earlier and hit a better ball."

Alcott was originally an open division player as a junior.

Later he had an accident, where he fell out of his chair and damaged his hand, leading him to be reclassified into the quad division when he returned to tennis in 2013/14.

"It was a bit of a whirlwind lead-up (to returning to tennis competition)," Crump says.

"We had a camp in Melbourne, he came and had a hit, to see how he'd go.

"He jumped in a chair and went up against a player in the open division, and he looked good.

"That turned a light on for him and for most of us (that he could be something big)."

Australian Open organisers took a gamble ahead of the 2014 quad singles tournament, handing Alcott a wildcard.

He repaid their faith by making the final, and going within a few points of winning it all against American David Wagner.

Next year he was the champion — and then things took off.

Seven straight Australian Opens, a hat-trick of titles at Roland Garros, two more on the grass of Wimbledon, and two US Opens, plus two Paralympic singles crowns leading into this tournament at Flushing Meadows.

One of the big reasons for his continuing success, aside from his talent, determination and will to win, is that — with prompting from coaches — Alcott has continued to add to his game.

"His variety of serves, his backhand with the slice and the (strength of) volleys were all added," Crump says.

"It's like in cricket, if you're a bowler, if you keep bowling the same ball, you're going to get hit over the fence."

This whole year, Alcott has played down or deflected questions about the Golden Slam or the calendar-year Grand Slam.

Even as he moved through the rounds at the Tokyo Paralympics, he was virtually silent about the bigger picture.

One reason for that is what happened in 2019.

Alcott came to New York as a prohibitive favourite to complete the calendar-year Grand Slam in singles — having swept through the Australian Open, French Open and Wimbledon.

He was also on track for a Grand Slam in doubles, having won the first three titles of the year with partners including Heath Davidson and Andy Lapthorne. He would clinch the doubles Grand Slam with a win in New York alongside Wagner.

In the quad singles round-robin stages he played Briton Andy Lapthorne, who caused a surprise by holding four match points before Alcott steadied to win.

Alcott got to the final, where he met Lapthorne again — this time, whether it was a bad day, Lapthorne's best day, or what was at stake, Alcott threw in one of the worst performances of his career, beaten 6-1, 6-0.

This year Alcott appeared almost impossible to beat in the majors, winning in Melbourne, Paris and London to get everyone talking about the Golden Slam.

He lost only four games in total in getting to the US Open final, for a rematch of an incredible Paralympic semi-final against young Dutch player Niels Vink.

In Tokyo, Vink and Alcott went to three sets, the Australian prevailed and left Vink distressed at his failure to make the gold medal game, resulting in the hug that went round the world.

Ahead of the final, Crump laid it out, saying Alcott was on track for the Golden Slam.

"Currently, Niels Vink, he's flying. They played in Tokyo, it could have gone either way," he said,

"This kid will take over — he is 21 years old, could be around for another 10 years.

And earn it he did.

The omens were good before the game — the previous match on Louis Armstrong Stadium had seen Dutch player Diede de Groot finish off the Golden Slam in the women's wheelchair (open) division.

But the challenge was clear from the very first game, where Vink broke Alcott's serve to 15 — minutes later, the Australian returned the favour.

It was a sign of things to come. Serve would be hard to hold, with both men capable of strong returns that put the server under pressure.

There were four straight breaks of serve from 2-2 to 4-4, finally Alcott imposed his will on proceedings and held to love.

The big moment came in the 12th game, where Vink had a point to take the set to a tie-break at 40-30, before Alcott reeled off three straight points to win it 7-5.

That was the key to the match — the second set was much clearer. The Australian broke early and held the advantage. He raced to 5-2, and then it was on his racquet.

It proved a straightforward exercise — he hit a brilliant forehand winner to set up championship point, and then repeated the dose to clinch victory.

After embracing Vink at the net, Alcott wheeled away to look around the stadium — he spun his chair in circles in a growing celebration, then rolled over to the side of the court, muttering a heartfelt "thank God!".

The relief was clear, as well as the joy.

At the presentation, an emotional Alcott thanked New York crowds for accepting him, and organisers for putting wheelchair tennis on the big courts, giving him and his fellow competitors a huge opportunity.

The indications are clear, that a home farewell at Melbourne Park could be on the cards.

Alcott was keen to make as many memories as possible on this trip. After he had collected his trophy, he headed next door to Arthur Ashe Stadium to watch Daniil Medvedev's stunning win over Novak Djokovic — another example of historic opportunities not always coming off.

As the cameras picked him up in the stands, the Australian lived up to his big personality, popping a beer and pouring it into the trophy before chugging it, to huge roars from the New York crowd.

Asked about Alcott's achievements and place in history, Crump points to people like Japan's Shingo Kunieda, who has won three straight Paralympic men's open singles titles, and 26 grand slam titles. He also raises Hall, who ended his 20-year career with a 632-111 singles record, plus a string of majors, Masters and Super Series tournament wins.

But in the end, he acknowledges Alcott's place as a transformational player, regardless of the raw numbers.

"You can only beat what's in front of you, and Dylan's record will stand for a long, long time.

"He's put it (wheelchair tennis) on the world map".