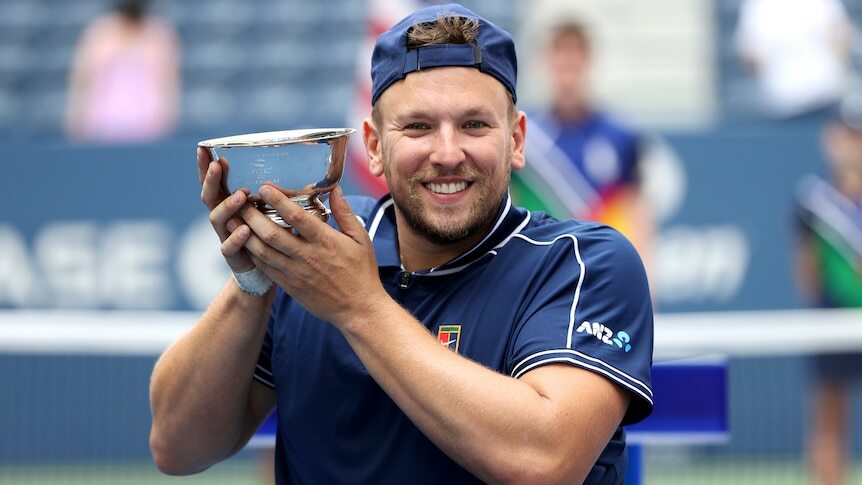 The Golden Slam takes in his Australian, French, Wimbledon and now US Open Championships, together with his gold medal from the Tokyo Paralympic Games.

"I used to hate myself so much, I hated my disability, I didn't even want to be here any more.

"I found tennis and it changed and saved my life.

"Now I've become the only male ever in any form of tennis to win the Golden Slam which is pretty cool."

He thanked the organisers for "putting us on stadium courts, changing my life, changing Niels's life, and giving disabled people a platform."

Alcott celebrated with supporters, then turned up next door at the Arthur Ashe Stadium to watch the men's singles final between Novak Djokovic and Daniil Medvedev.

As the cameras pointed at him in the stands, the Australian opened a can of beer, poured it in his US Open trophy and drank, then tipped the trophy on top of his head, prompting big cheers from the Flushing Meadows crowd.

DeGroot was the first tennis player to win all four major titles plus a gold medal in the same year since Steffi Graf in 1988.

'He's achieved what he wanted to achieve'

Alcott's dad, Martin, said his son was not planning to compete at the next Paralympics, but hopefully would play the Australian Open next year.

"My wife and I are very flat because we think Paris in 2024 sounds delicious … we'd all love to go to Paris, but we just have to see.

"I'm sure he'll take it one tournament at a time with the next one being his home slam 10 minutes from his house at Melbourne Park and Rod Laver Arena in January, we hope."

As for his son's historic Golden Slam, he said he was more relieved than anything about the "glorious result".

"You feel exhausted – my wife and I are both absolutely shattered today … you feel like you play the game with him," he said.

"But just relief that he's achieved what he wanted to achieve.

"When he gets home in the next few days and gets out of quarantine, we really look forward to hopefully celebrating with him."

While Alcott said he was always proud of his son, he could not take the credit for his achievements.

"He gives us all credit, which is very nice of him.

If there is one thing Mr Alcott proud of, it is passing onto Alcott an ability to problem-solve and "get the job done".

"He gets so much done and he gets it done so well," he said.