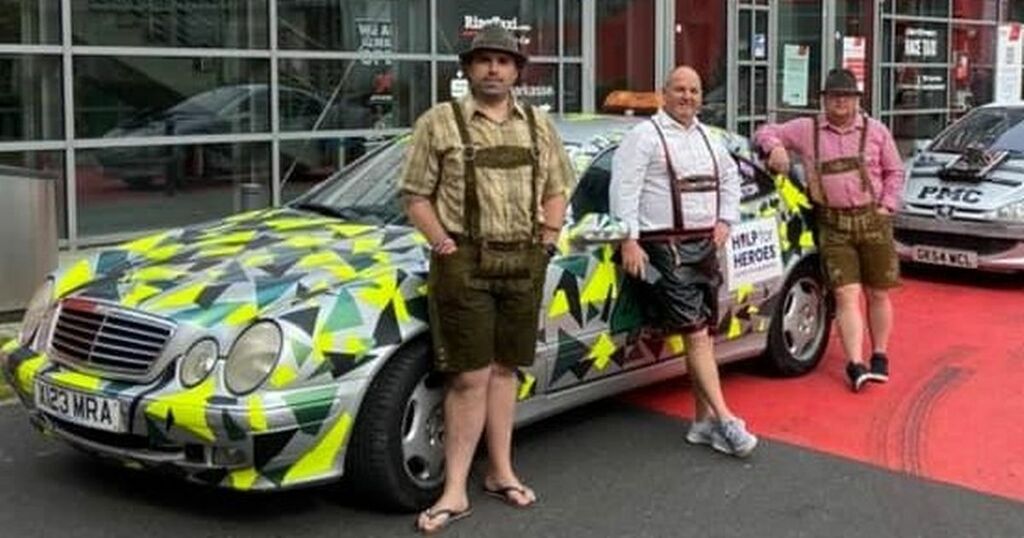 A mechanic has returned to his hometown after driving 4,300 miles to support a friend who was diagnosed with cancer.

Keith Binyon, 46, set off on a European tour from Crook, Durham, on September 26, alongside friends Anthony Cranston and Mark Gough.

Anthony, 37, was diagnosed with cancer in March 2016 and had to undergo several operations and seven months of chemotherapy.

The soldier, who serves in 26 Regiment Royal Artillery, had always dreamed of driving in a rally.

So the trio jumped in a customised Mercedes 'banger' and took part the British Bangers 2021 rally with the aim to raise funds for Help for Heroes, which supported Anthony during his cancer battle.

Anthony from Larkhill, Wilts, said: "I had always wanted to drive in a big rally, so when I chatted to Mark and Keith about this event we all just said, 'let's do it!' Especially as it's a charity rally and this meant I could raise money for Help for Heroes.

Anthony had several goals that he had to reach before he would be signed off to return to work as a serving soldier and Help for Heroes assisted him in this process.

He added: "I can't thank this charity enough for what they did to help me so I wanted to be able to give something back. Keith and Mark also wanted to join in the event and help me to help the ones that helped me."

The trio took one week to reach Benidorm on October 3, and returned to Larkhill on October 6, with Keith then reaching Durham on October 7.

To make the car stand out from the crowd, Keith customised the car in bold colours by Keith, with the addition of Help for Heroes emblazoned on both sides.

The team really enjoyed the experience and were relieved to not have had any breakdowns - although what they call 'geographical errors' added to their mileage.

A highlight was the reaction they caused in Nürburgring when all three team members arrived for their drive around the racetrack wearing lederhosen. This was well received by the locals.

The team hope to raise £1,500 for Help for Heroes with this event and donations can be made at their fundraising page.

Keith said: "It was truly a once in a lifetime experience. Something to tick off the bucket list. Seeing so many countries in just a few days was amazing and the views were incredible.

"Raising money for Help for Heroes at the same time means a lot given what Anthony went through. They helped him and so many other veterans so it was a no brainier."

For the latest County Durham news direct to your inbox every day, go here to sign up to our free newsletter