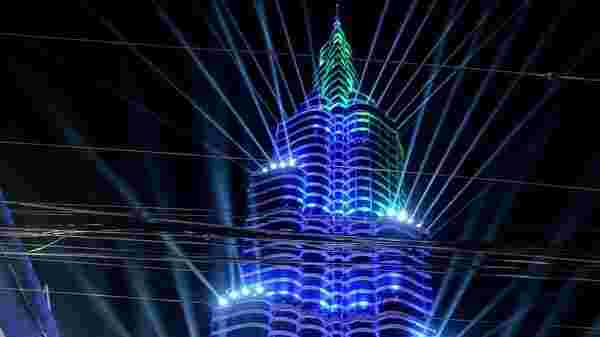 Kolkata's iconic Durga Puja pandal which resembles the world-famous skyscraper Burj Khalifa has halted its laser show after receiving complaints from the pilots.

According to a report in Hindustan Times, the Sreebhumi Durga pandal called off the laser show after three pilots of three planes faced difficulty in landing the aircraft. The pilots lodged a complaint to the air traffic control (ATC) because West Bengal's South Dumdum airport is located close to the venue of the iconic pandal.

In India, laser shows are banned around the airport because of strong beams of light cause visibility problems for pilots during landing.

Like in previous years, the organisers have covered their Durga idol with 45 kilogrammes of gold, state fire minister Sujit Bose said. “Every year, we build one iconic structure as our `pandal’ (marquee). Last year, we had built a replica of the Kedarnath Temple. This year our artist proposed Burj Khalifa …we sent him to Dubai to get every detail of the structure so that a good job could be done," he said.

However, now the Puja organisers have claimed that they have halted the light show in view of the Covid-19 pandemic restrictions since more people were visiting the pandal because of it.