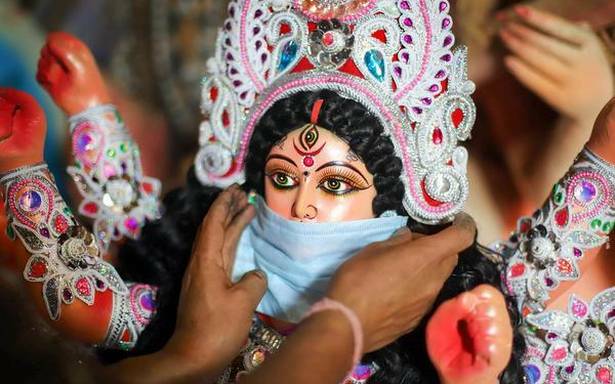 The puja committees and the Cuttack city peace committee on Saturday decided to approach the chief minister and seek his personal intervention on the restriction on the height of Duga idols.

Special Relief Commissioner (SRC) P K Jena on Friday announced the state government's decision to restrict the height of Durga idols within four feet in view of the prevailing COVID-19 situation and in the interest of public health.

The committees unanimously decided that they will make an appeal to the chief minister by September 16 to “reconsider” the decision on the height of Durga idols.

“We expect a reply from the chief minister by September 17. The committees will meet again on September 17 to decide the next course of action,” they said.

Meanwhile, BJP leaders announced that they would go ahead with the party’s Cuttack Bandh programme on September 13 demanding the withdrawal of restriction on the Durga idol height.

Watch | Durga idol makers who travel from Kolkata to Coimbatore

“It was like a party affair and therefore, the decision of the government appeared to be BJD’s decision’s and not government’s decision,” Mr. Dey said.

Cuttack BJP Nagar president Lalatendu Badu said that the people in general are opposed to the government’s decision because it is against the century old puja practice and tradition in the city.

Barabati-Cuttack Congress MLA Mohammad Moqim also demanded withdrawal of the restriction on the height of the idols.

“This is unfortunate that the chief secretary and SRC did not take any decision on the September 7 meeting and sought two day’s time. Later, the government upheld the earlier guidelines without reconsidering the pleas of the puja committees,” he said.

Balu Bazaar Puja Committee, one of the oldest body organizing the Durga Puja, has planned to move the Orissa High Court challenging the restrictions of the state government.

“We are worshipping the 8 feet height Durga idol since 1914 and it is not possible to change the tradition,” said its president Suryakant Sanganeria.