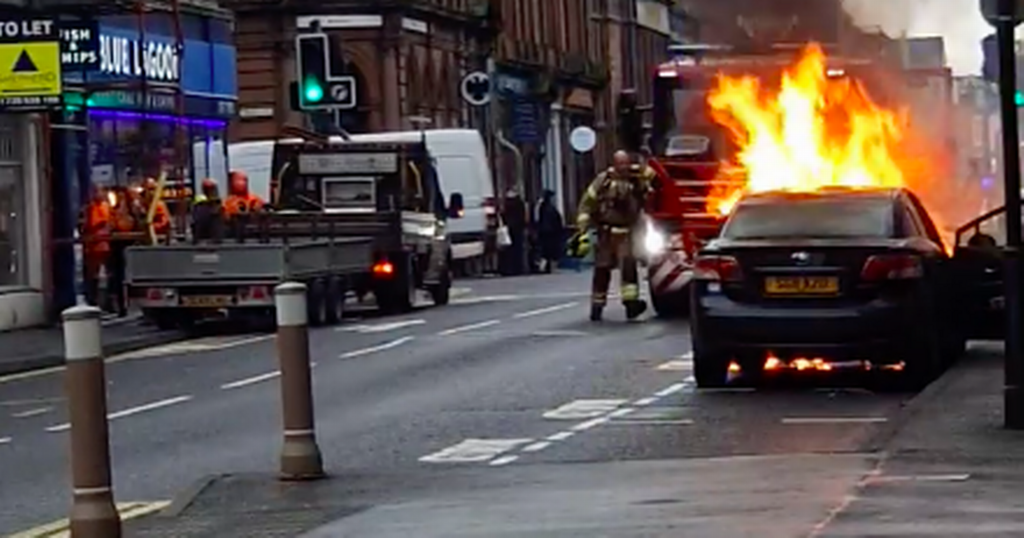 Shocking footage has captured a vehicle go up in flames on a Scots street during rush hour.

Emergency services raced to Kinnoull Street in Perth just before 9am today as flames could be seen engulfing the front of the car.

The busy street came to a standstill and was soon shut when a fire engine made it to the scene.

One of the firefighters jumped out to warn members of the public to stay back.

Footage of the incident shows the black vehicle parked in a space on the road.

Flames can be seen shooting from the front of the car and smoke billowing from the vehicle.

The driver door is hanging open as concerned members of the public line the other side of the road.

Blaring sirens can then be heard as a fire engine races to the incident and a crew gets out to battle the blaze.

The road was closed for around 30 minutes as emergency services dealt with the incident and the fire is not thought to be suspicious.

A Police Scotland spokesperson said: “We received report of a car on fire on Kinnoull Street in Perth around 8.55am on Thursday, 7 October, 2021.

"The fire is not being treated as suspicious and the road was re-opened at 9.20am.”

A spokesperson for the Scottish Fire and Rescue Service said: "We were alerted at 8.50am on Thursday, October 7 to reports of a car on fire at Scott Street, Perth.

"Operations Control mobilised one appliance and firefighters extinguished the fire. There were no reported casualties and crews left after ensuring the area was made safe."