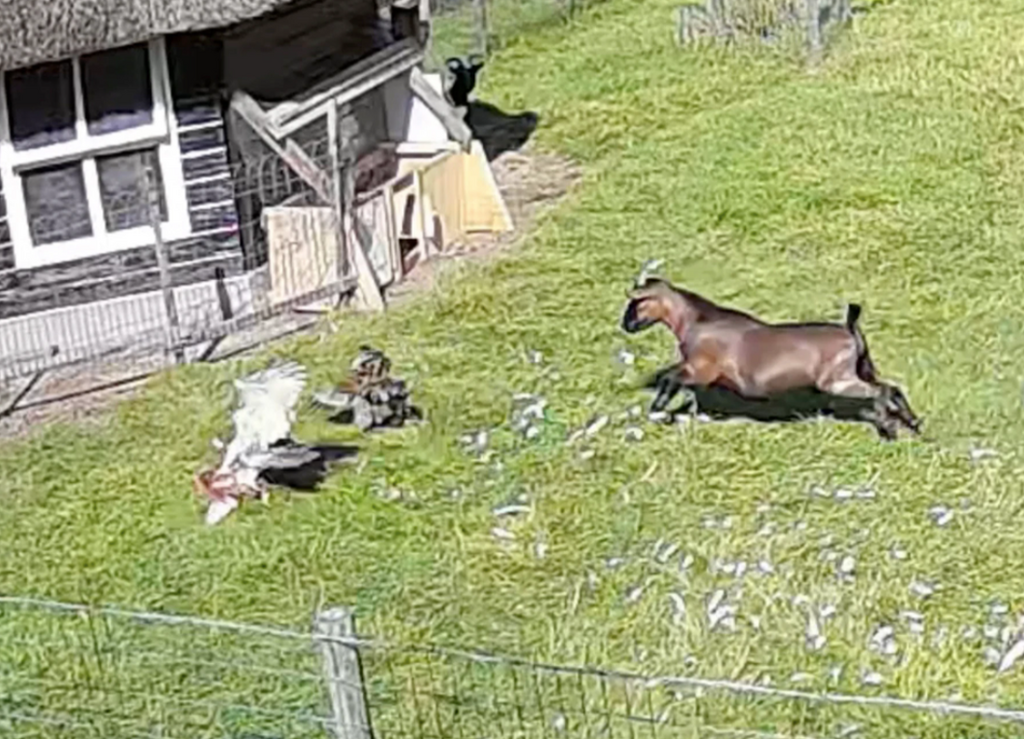 Dramatic footage from the Netherlands has captured the moment that a heroic goat saved a chicken from almost certain death after it was attacked by a hawk.

In the CCTV footage from a farm in Gelderland, a goshawk swoops down out of nowhere and latches onto an unsuspecting chicken. The two birds flail around for a few seconds with the hawk clearly the stronger of the two.

Then a rooster attempts to save its farmyard friend but is also unable to overpower the bird of prey. Miraculously a nearby goat, reportedly named Bruin, then charges over and forcefully manages to knock the hawk away from the chicken causing the much larger bird to fly away empty-handed, or should we say “empty taloned”?

The incident, which reportedly happened on 5th September, was all over within just 17 seconds and left the chicken with only minor injuries.

In a further display of the apparent unity of the animals on the Dutch farm, Beets, the 59-year-old farmer who owns the livestock, claims that the other animals rallied around and nursed the chicken back to health.

Speaking to SWNS, Beets said: “I was so proud of the rooster and the goat jumping in to defend our chicken. I was also very relieved that the chicken survived.”

Amazingly, Beets has revealed that this isn’t the first time that something like this has happened on his farm. Apparently, other goats and even turkeys have leapt to the defence of chickens when then been attacked by birds of prey.

“In the seven years I have lived here, it’s the third attack on our chickens”, revealed the farmer. “This was the second from a goshawk and the other was a buzzard.”

He added: “I grew up with a deep respect for nature and have worked in environmental jobs and in nature conservation all my life. We try to facilitate nature as much as possible.”

It would appear that life for a chicken is never dull and full of peril on this particular farm but thankfully for them, they’ve got some backup. Who would have thought that farmyard animals could be so badass?