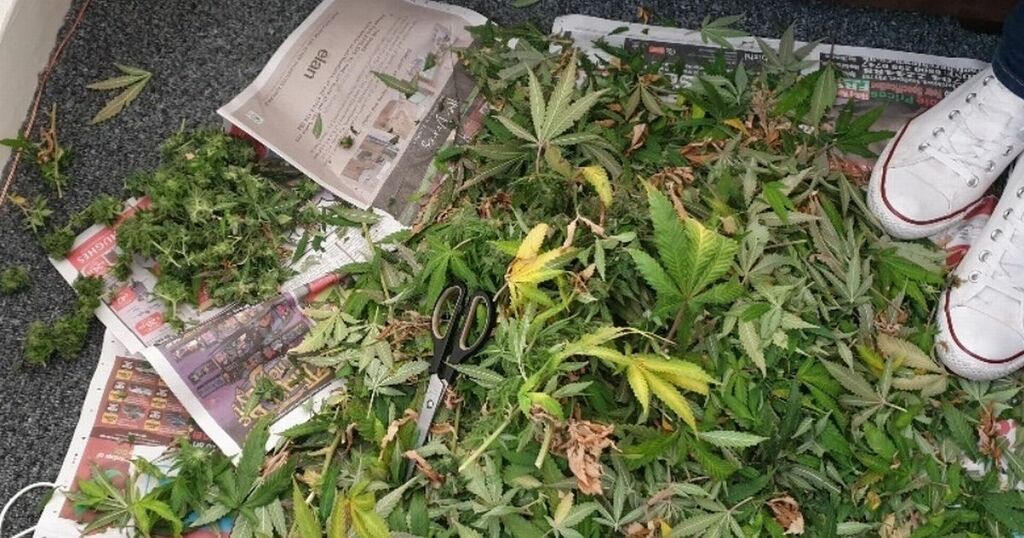 These photos show how a drug dealer was caught red handed when he grew a cannabis farm near a police station.

John Clague decided to set up a crop in his flat, despite the fact he lived just around the corner from Marsh Lane Police Station.

But when it came time to harvest it, the dad-of-three's decision not to close the windows at his home came back to haunt him.

Prosecutors said police were immediately alerted by the pungent smell of the Class B drug wafting around the area.

And officers "literally followed their noses" to the 47-year-old's block of flats in Stanley Road, Bootle and knocked on his door.

Observing how close Clague had set up a cannabis farm to police station, the judge, Recorder David Knifton, QC, said: "If it wasn't so serious it would almost be the stuff of comedy."

Liverpool Crown Court heard a group of officers returned in a vehicle to the station yard on the afternoon of Friday, March 27 last year.

Derek Jones, prosecuting, said: "Several of them detected a very strong smell of cannabis coming from the local area.

"The officers literally followed their noses, walked around the area and found the source of the smell."

Mr Jones told the court the officers entered the block of flats and went to Clague's address.

He said: "The defendant opened the door to the officers and immediately said he was stripping the plants."

In one room officers found a growing tent containing two plants remaining from a larger crop, with lighting equipment and fans.

One photo released by Crown Prosecution Service Mersey-Cheshire shows this tent, with the plants alongside three fans and an electricity adapter - although the court heard unusually for cases of this type, the electricity meter in the flat had not been bridged or bypassed.

In the kitchen officers discovered the remains of 10 plants, eight of which Clague was in the middle of stripping in his living room.

Mr Jones said: "He was caught in the act of preparing - stripping - those plants."

Two photos show the cannabis laid out on an old newspaper in Clague's lounge, with a pair of scissors.

The court heard police recovered around 950g of cannabis divided into 33 one ounce bags "bagged up and ready" in the kitchen, which can be seen in another picture, along with electronic scales and £300 in cash, plus a further £2,200 in cash in a bedroom.

Mr Jones said: "By his bed was a hollowed out Lynx deodorant can. Inside were a couple of bags of cocaine, weighing 4.79g, with a lower street value of around £190.

The court heard when arrested and interviewed by police, Clague claimed he had been growing the cannabis to make cannabis oil, which he was set to argue in a trial.

Mr Jones said Clague had abandoned his cannabis oil claim and now accepted he was a cannabis smoker and while some was for his own use, "clearly the majority would have been sold on to a circle of associates".

Recorder Knifton commented that when interviewed by the police, Clague "had very little knowledge of the chemical process required to make cannabis oil".

Mr Jones said Clague accepted an ounce of cannabis could be sold for £150 upwards, so there was around £5,000 of bagged up cannabis.

A police expert said the crop had an estimated potential yield of 600g, which Mr Jones said amounted to around a further £2,500 of cannabis.

The judge said: "There clearly must have been a previous production because of the quantity there."

Clague has 10 previous convictions for 32 offences, including supplying drugs as a youth and supplying heroin as an adult.

In 2001 for being concerned in the supply of crack cocaine and heroin he was jailed for three years.

The court heard in 2009 he was sentenced for possessing cocaine and in 2018 he was convicted of drink driving.

Recorder Knifton said: "I'm dealing with a man in his mid-40s who knew what he was about by virtue of his previous convictions and has set up a cannabis farm fully knowing it seems to me what the potential consequences could be."

However, he said he was considering suspending any prison sentence and adjourned the case overnight so enquiries could be made as to whether Clague could be offered a Drug Rehabilitation Requirement (DRR) addressing his self-confessed "addiction to cannabis".

Matthew O'Neill, defending, said Clague was a dad-of-three who shortly before he committed the offences had split up with his wife of 25 years and started using cannabis more than he did previously.

He said Clague was willing to address the issue in his life, which was his use of cannabis, and to engage with a DRR.

Mr O'Neill suggested there was a "realistic prospect of rehabilitation" given the Probation Service had assessed his client as a low risk of reoffending and noted the gaps in his offending behaviour over the last 20 years.

He said Clague - accompanied by his girlfriend sitting in the public gallery - was willing to do "whatever it takes" to avoid going to prison.

The judge also ordered him to comply with a four-month home curfew, from 9pm to 7am daily, which he said he had deliberately set at four months as a punishment because it included the Christmas period.