Don Winslow: ‘We’re fighting Trump and the Trumpists, and the imitators’

Early on Saturday morning, onstage at the Santa Fe Literary Festival, Don Winslow spotted a suspicious figure quietly approaching through the audience on hands and knees. “Oh, you’re a photographer!” the 68-year-old author exhaled a moment later. “I was wondering who was crawling up here. You understand that a lot of people really don’t like me?”

In the three decades since the publication of his debut private eye novel A Cool Breeze on the Underground, Winslow has managed to make himself his fair share of enemies. He received some particularly unwelcome attention after spending 23 years exhaustively researching drug cartels for his revelatory and award-winning Cartel Trilogy. “I was getting threats from drug traffickers,” he tells me, shortly after making it safely offstage. “I didn’t, and don’t, take them terribly seriously because there’s no upside for them to kill an American writer in America. It would be very bad for business, and at the end of the day they’re business people.”

These days Winslow is much more wary about a different sort of menace.

“Now the threats come from the right wing,” he explains. “It’s the Proud Boys. Again, I don’t take it terribly seriously. Most of those people are physical as well as moral cowards. I can take care of myself, but I’m definitely more aware of my surroundings at events like this.”

Winslow has earned the ire of Trump supporters ever since the 2020 Presidential election, when he began dedicating his time, money and energy to fighting the Trump agenda online.

His Twitter account, @DonWinslow, has over 850k followers and regularly posts Tweets and video clips critical of Trump and supportive of progressive causes. Winslow recently announced that since completing work on his City on Fire trilogy, the first book of which has just been published, he has retired from novel writing to focus full-time on political activism. “We don’t get to choose our time,” says Winslow. “We just don’t, no more than someone living quite peacefully in Ukraine up until a few months ago gets to choose, not that I’m comparing myself to them.”

Winslow says the decision to give up the career which has dominated his life for over thirty years came about because of a combination of factors. “I think the sort of confluence of coming home with this trilogy, and then the events of January 6, really started me quite seriously on the path of: ‘Boy, maybe the universe is telling me something’,” he says. “It felt time to set one thing down and concentrate on another. A fan the other day said it very cleverly. He said: ‘Oh, you’re putting down the pen for the sword.’ Yeah, that’s right.”

The City on Fire trilogy brings Winslow’s writing career full circle by returning him to the Rhode Island of his childhood. Born in New York City in 1953, Winslow grew up in the small beach town of Perryville. The area was home to both the Irish and Italian mobs, who found ways to coexist before a gang war tore them apart.

Years later, having set himself the task of reading the great classics of literature, Winslow was struck by how neatly the mob warfare he remembered from his youth could be transposed onto Homer’s Odyssey. “I came to the classics rather later in life than one normally does, I guess, and I was struck by how similar those stories were to real life crime stories in America,” he explains. “All the freaking themes that we deal with, in my genre, the Greeks had already done.”

After leaving Rhode Island at the age of 17, Winslow worked his way around the world, finding jobs with a photographic safari agency in Kenya, a hiking expedition company in China and as a director of Shakespeare plays in Oxford. He returned to Rhode Island 10 years ago to care for his mother, going back to live in the house he’d grown up in. And it was during his talk he revealed he’s sometimes approached in town by Trump supporters upset by the things Winslow has written on Twitter. He jokingly shoots back: “When I find out who read them to you… there’s gonna be trouble.”

While his attacks on his political adversaries are often withering, Winslow grows passionate when he talks about his desire for Democrats to reclaim the very idea of patriotism. “People put Trump’s face on the flag, a wannabe dictator’s face on the American flag, and then invaded the Capitol and called themselves patriots,” he points out incredulously. “I’m not yielding it to them.”

He points out that his own family’s history in America dates back generations. “There’s a painting of one of my ancestors in the Capitol building, and I can take you to the exact spot where my great-great-grandfather was killed fighting against slavery,” he says. “So when these white supremacist f***heads talk about blood and soil, I can talk about blood and soil all day, but my perspective is: ‘Yeah, my family have been here since the Mayflower, but that doesn’t make us Native Americans. We were immigrants.’ I have as much right to that flag as does the Central American who arrived here two years ago.”

It’s for that belief that Winslow has decided to take up the fight, even if the mode of warfare might not be the one he’d choose. “Clausewitz, the famous German military historian, once said, correctly, that you should always try to fight a battle on the ground of your own choosing, but that’s not always possible,” he points out. “Sometimes you have to fight the battle where it is. Where it is now is social media. It just is. I’m not crazy about it, but that’s where the fight is. We’re either going to win it or lose it on those grounds, so that’s where we have to fight. This is immodest, but I think I have certain skills about saying things succinctly. I think I do have some skills that adapt themselves well to that format. I know how to say things in three or four words. I know how to throw that rapid verbal punch, or series of punches.”

The many campaigning videos he’s produced since 2000, some featuring celebrities like Bruce Springsteen and Jeff Daniels, have proved wildly popular on social media and have been viewed by over 250 million people. “I work with my partner, Shane Salerno on the videos,” Winslow explains. “He wrote little films like Armageddon and all the sequels of Avatar, so he has some serious film storytelling skills. I think between the two of us we know now how to make short, hard-hitting films, where people go: ‘Oh, shit. I didn’t see it that way’ or if they already saw it that way, it fires them up.”

In the years he’s been campaigning, Winslow has already been on the receiving end of various online dirty tricks. “We fight a lot of bot interference,” he says. “People set up phoney accounts saying they’re me, saying terrible things about transgender people, women and people of colour. It makes me sick to my stomach. It really upsets me. But generally speaking we’re fighting Trump and the Trumpists, and the imitators. The Ted Cruzs, the Josh Hawleys, and those other traitors. You can quote me on that.”

Winslow believes Joe Biden was the right choice to fight the 2020 election. “None of the other candidates would have won,” he says. “You needed that guy. You needed that middle of the road uncle, a decent human being, to win that election.”

In his talk, Winslow said he felt: “History might record that Joe Biden saved democracy in the last election.” However, he now thinks the Democrats need to be bolder. He’s memorably accused the party of bringing “spoons to a knife fight” when it comes to their political tactics, and urges the party to take the battle to Republicans.

“They need to drop the spoons and pick up the knives,” he says. “To stop backing up. To stop this language, like: ‘Oh, that’s not quite accurate’. How about saying: ‘That’s a lie, and you’re a liar’? How about saying that’s treason and you’re a traitor? How about saying that’s racism and you’re a racist? How about that? How about issuing some subpoenas instead of invitations? What is this, your eighth grade cousin’s graduation ceremony? Invitations? I guarantee you, you park wrong out here on the street and they’re not going to send you an invitation. They’ll send you a summons. That’s for a parking ticket. We’re talking about the attempted overthrow of the democratically elected government. An invitation? I’d send these guys subpoenas, make them testify under oath in front of television cameras, and then if they want to take the Fifth Amendment, what I say will tend to incriminate me, good! Let the country see.”

The Independent, as the event’s international media partner, is providing coverage across each day of the festival with exclusive interviews with some of the headline authors. For more on the festival visit our Santa Fe Literary Festival section or visit the festival’s website. 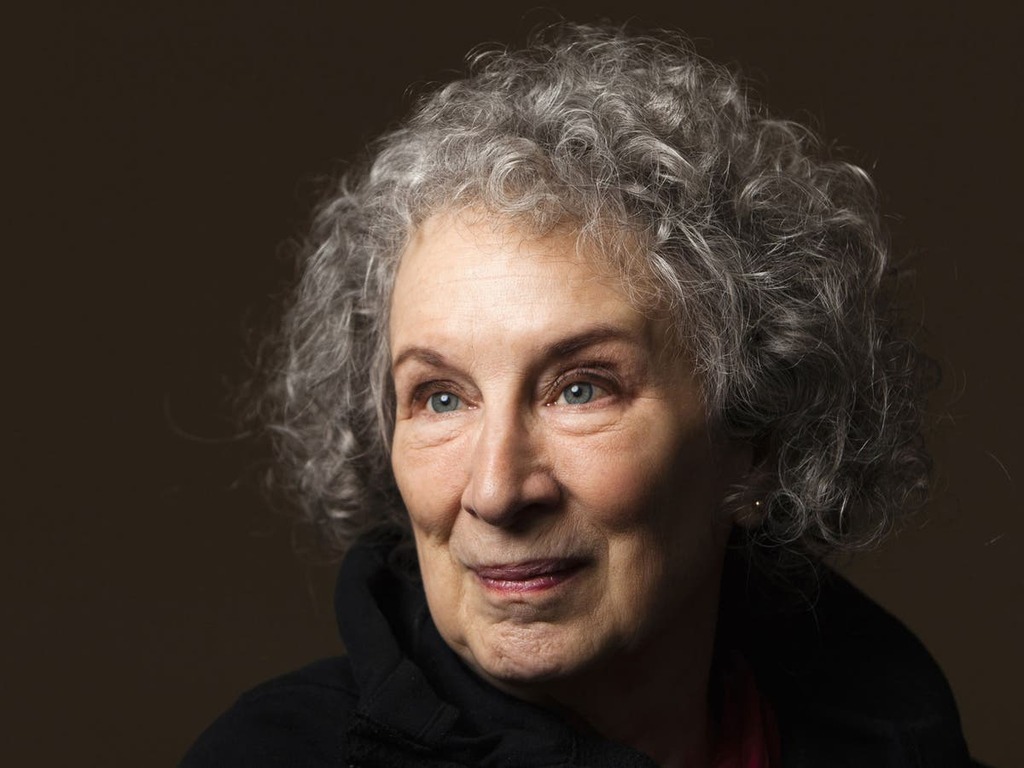 ‘We can no longer bring spoons to a knife fight’: How world-famous authors plan to fight for Roe v Wade
Holly Baxter reports from the Santa Fe Literary Festival on Margaret Atwood’s refusal to mince her words and Don Winslow’s…

The Independent UK
One subscription that gives you access to news from hundreds of sites
How to be a bestselling author: Writing tips of Margaret Atwood, George RR Martin, Emily St John Mandel and more

‘Writing is really hard for me. I’m not being facetious; I’m not a natural writer. Every sentence in this book…

The Independent UK
John Grisham: ‘There are tens of thousands of innocent people in prison and you don’t believe it because you’re white’