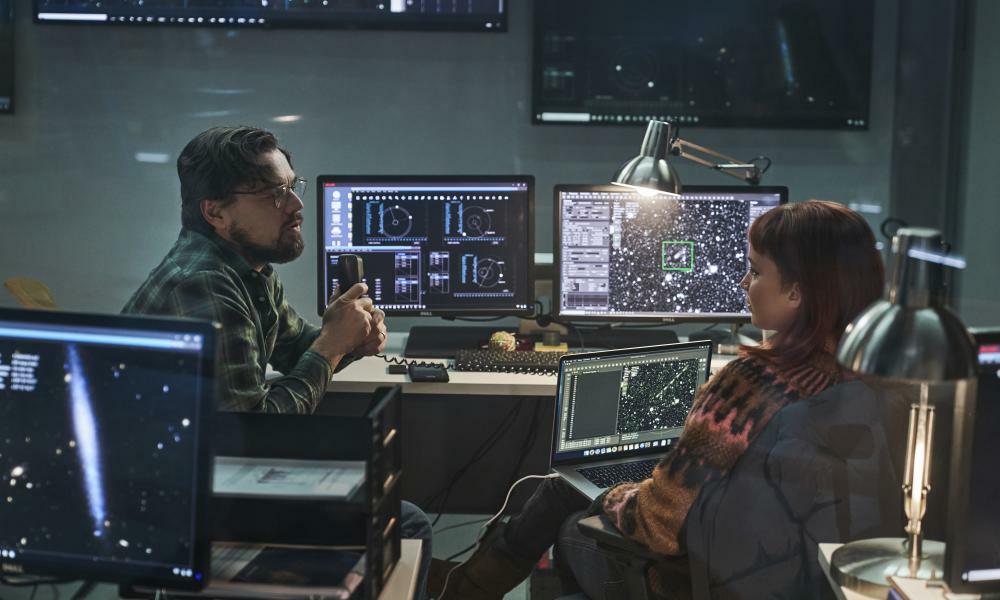 Rarely has a film been as divisive as Adam McKay’s climate satire Don’t Look Up. Although it has been watched by millions, and is already Netflix’s third most watched film ever, the response from critics was largely negative. Many found its story of scientists who discover an asteroid heading for Earth a clumsy allegory for the climate crisis, while others just found it boring. But many in the climate movement have praised the film, and audience reviews have been generally positive.

We asked four climate experts to give their views on the film. Warning: spoilers ahead.

Ketan Joshi: ‘The main character of the climate crisis is absent’

The starkest thing about Don’t Look Up is the sheer depth of the emotional significance it has for the folks who’ve been in the trenches of the climate fight for a long time. They’ve encountered decades of madness, as their warnings were twisted, ignored, denied and downplayed by politicians, media and devious industry players. Those people feel intense catharsis when they watch this film. It is not a great film, but to release that painful pressure valve, it doesn’t need to be.

Regardless, we have to engage with the deeper flaws of this film. It’s a massive hit, widely viewed across the world. It matters then that in attempting to hold a mirror up to humanity’s response to the climate crisis, it has strange priorities.

Weirdly absent from the film is a clear analogue of the fossil fuel industry (Rylance’s techy disaster capitalist wants to exploit the mineral wealth of the comet, but he isn’t piloting the asteroid for profit). Considering the film is touted as holding up a “devastating mirror”, the absence of the main character of the climate crisis is unforgivable. Similarly, the toxicity of the fossil industry’s impact across both sides of politics would have been a richer, funnier and more accurately reflective approach. The Trump satire falls flat.

The void left by the fossil industry is filled with strange choices. Media misreporting is mostly put down to air-headed morning show fluff, but in reality, journalism’s most deadly failures on climate come down to false balance (which features only briefly), or energised disinformation (there’s no News Corp analogue here, extra weird considering McKay’s EP role on the very funny, Murdoch-inspired Succession).

The film wastes hours hand-wringing about celebrity culture, algorithms, memes and data privacy. But the real villains of the climate crisis aren’t citizens distracted by Ariana Grande and Twitter. They’re the decision-makers in the fossil fuel industry, their lobbyists, their marketing firms and their broadly spread political defence squad. I hope the next time this opportunity comes up, Hollywood aims for the people piloting the asteroid, and I hope they put effort into ensuring they hit those targets.

Fiona Harvey: ‘The role of the techno-loon, played by Mark Rylance, struck a chord’

Writing about the end of the world is often a thankless task, so the prospect of Don’t Look Up immediately appealed. Billed as a satirical comedy, what satire could even come close to the experience of the world’s biggest climate conference, Cop26 in Glasgow, where the main achievement of nearly 200 governments and 30,000 delegates after two weeks of wrenching talks and stark scientific warnings was a resolve to return next year and try a bit harder?

After 17 years of reporting on the climate crisis, I doubted at first that the film had much to tell me about the frustrations of communicating a hypothetical catastrophe. As the film’s scientists first struggled to clothe their data in sober, measured terms, then broke into swearing, arm-waving shrieks about provable imminent apocalypse, I nodded along. Yes, that’s what it feels like, and no, no one listens, not until it is too late.

Yet it was illuminating in unexpected ways – something I’ve always struggled with is how rational people can fail to grasp the scale of climate breakdown, how we could leave it so late. As the film shows, it’s partly because vested interests keep it that way, but it’s also just because we’re human. Believing in disaster before it strikes is fundamentally not how we work.

The role of the techno-loon, played by Mark Rylance, struck another chord. Cop26 was not a failure, though on the surface that was the obvious conclusion – it was more nuanced than that. Soon after the Cop26 circus left Glasgow, the danger of painting the outcome in such black-and-white terms became apparent, as well-meaning experts concluded – in all seriousness – as talking didn’t work, our best hope would be for billionaires to bypass the UN and geoengineer the climate from space. Because obviously the answer to a vast uncontrolled experiment on the atmosphere is to conduct a vast uncontrolled experiment on the atmosphere.

Don’t Look Up is hardly subtle, which may be why climate scientists have enjoyed it more than some film critics. But in a world where the president of the most powerful democracy appeared close to inciting insurrection, where businesses argue over whether saving the planet makes economic sense, where oil apologists ally with Covid deniers, where a teenager shows more maturity than 200 heads of government – well, subtlety sailed off across the horizon a long time ago.

There was a lot I liked about Don’t Look Up – it’s a broadly smart satire with some zinger one-liners and in my view the film pretty successfully used the impending doom of a scientifically indisputable planet-killing comet to draw parallels to the impending doom of the climate emergency, which we’re watching play out in real time. In the film, the world has six months and 14 days to save the planet from destruction but fails to do so because short-term political gain, corporate greed, misinformation, and utter stupidity divides America. In real life the clock is also ticking but the inaction and political failures go back decades.

How Kate Dibiasky, the postgraduate student played by Jennifer Lawrence who discovered the comet, is portrayed as an unhinged hysterical woman, will resonate with many female climate scientists and activists whose crucial knowledge has been sidelined. The scene where her parents declare that they’re in favour of the jobs the comet will provide will resonate with millions of people, including me, trying to deal with relatives who have bought into political lies.

I appreciated the young Indian guy who pointed out that the US didn’t invite any other countries to participate in its space mission to save the planet singlehandedly, which also helped make sense of the casual and not so casual racism by American leaders scattered throughout. But I didn’t get the fleeting shots of Black and Brown people watching the disaster unfold passively, and the scene where an Indigenous man plays a sacred drum (used in many Indigenous cultures to connect with the spiritual world) as the forest burns around him felt uncomfortable.

But my main beef is the “we’re all in this together” message, as if the climate crisis will impact everyone equally like a killer comet. It won’t, and those who’ve contributed least to global heating are already bearing the brunt of rising sea levels and deadly weather events such as fires, floods, extreme heat and droughts. Climate justice starts with recognising these inequities, otherwise the impending doom will arrive much sooner for some.

Damian Carrington: ‘It highlights the absurdity of staring disaster in the face, then looking away’

I loved Don’t Look Up, both as an entertainment and as a climate crisis parable. But the movie has been panned by many critics, with the main charge being that it is heavy-handed, blunt and too obvious. But that is exactly the point.

Scientists have been issuing blunt warnings about obvious dangers of global heating for years and have been ignored – carbon emissions are still rising. The film perfectly skewers the key ways in which they have been ignored: for short-term political expediency and short-term corporate profit.

In particular, the movie beautifully portrays the incredulity of scientists that their carefully constructed evidence can be dismissed with bluster such as “we’ll sit tight and assess” by leaders more concerned about today’s political weather and a media more interested in the minutiae of celebrities’ lives.

The film is a satire, but is it still too heavy-handed to reflect a deeper truth? Perhaps for critics assessing the movie solely on artistic merit, but not for scientific communicators such as Neil deGrasse Tyson, who told his 14 million Twitter followers: “Everything I know about news-cycles, talk shows, social media, and politics tells me the film was instead a documentary.”

The public seems to be siding with the movie makers. In its first 11 days, Don’t Look Up became Netflix’s third most-viewed film ever, and 250,000 people on IMDb gave the film a strong average rating of 7.3, compared with a Metacritic review of just 50%.

But global heating is a slow-motion disaster, not a comet set to destroy the Earth within months that needs to be nudged off course. The solutions to the climate crisis are much more complex and another criticism is that the film presents none of these. I’d argue it doesn’t need to – the solutions exist and are well known.

The point of the film is savagely highlighting the absurdity of staring disaster in the face, then looking away rather than acting. In that respect, it is a triumph.