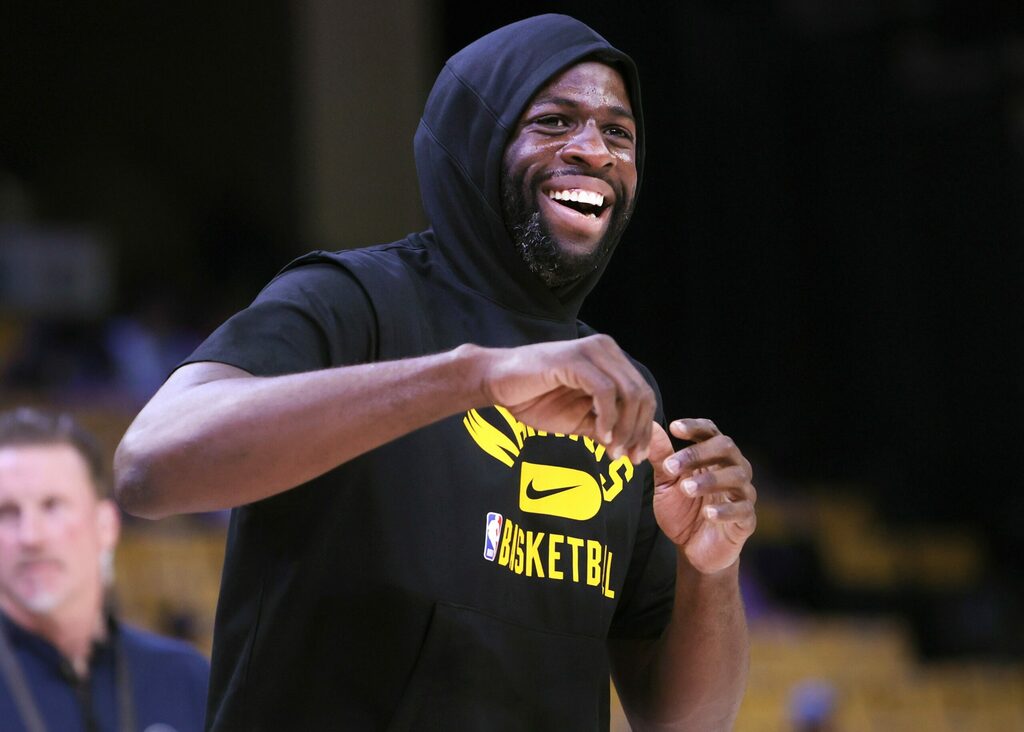 Draymond Green dancing to ‘Whoop That Trick’ as Grizzlies blew out Warriors was awesome, not controversial
This actually isn't a big deal.

Rockets rookie Usman Garuba: “I like to watch Draymond Green a lot. There are tons of clips of him on…

Draymond Green got the better of Jaren Jackson Jr. on Monday night

Draymond Green and his wife Hazel are committing $100,000 to start a fund honoring his late teammate Adreian Payne

Can Draymond Green Power the Warriors?

Draymond Green offered a simple truth as he addressed the media in Denver last month.

“Everybody not made for the playoffs,” Green said after the Warriors took a 3–0 series lead following a 118–113 victory against the Nuggets. “You look around and some guys who you think are guys are not guys in the playoffs.

Green’s comment wasn’t a jab at soon-to-be two-time MVP Nikola Jokić—who Green lauded after a 37-point, 18-rebound performance—nor any Nuggets player in particular. Instead, perhaps, Green’s words were a bit of self-affirmation. And rightfully so. After a 34-month postseason absence from June 2019 until this April, Green is back where he belongs. One of the greatest playoff performers of this century is now fueling Golden State’s next push for the Larry O’Brien Trophy.

Few players in the modern era can match Green’s playoff résumé. He’s one of 13 players in NBA history to tally 1,500 points, 1,000 rebounds and 750 assists in the postseason, joining a dozen current or future Hall of Famers. He’s sixth among active players in playoff assists and seventh in win shares. And, while impressive, the counting stats don’t do Green’s postseason résumé justice.

Perhaps this simple accounting paints a better picture. Green is a plus-980 in 4,198 playoff minutes dating back to 2015, the year of Golden State’s first title. By contrast, LeBron James is plus-633 in 4,318 playoff minutes in that span. Tim Duncan checks in at a plus-501 in the 3,925 minutes comprising his best six-year playoff run (1999–2005) and Shaquille O’Neal posts a plus-590 in postseason minutes from ’00–05. Totaling plus-minus over an extended stretch is an imperfect measure, one that doesn’t perfectly capture individual performance. But Green’s significant edge over the century’s best players is illustrative. His play fuels winning basketball like few in recent memory.

“The bigger the game the better he plays,” Warriors coach Steve Kerr said. “When the stakes are higher he gets to use his intellect and his competitiveness at a high rate. That’s what the game comes down to in the playoffs.”

Green’s playoff dominance is metronomic, with his performance seemingly unimpacted by opponent, lineup or age. Green finished third among all players with a +12.5 net rating in the 2015 playoffs. He’s fourth among rotation players this postseason at +15. Of Golden State’s 10 best three-man lineups this postseason (min. 50 minutes), seven feature Green. The Warriors’ dominance over the sport across the last decade will largely be remembered for Steph Curry’s rainbow threes and Klay Thompson’s magical 41-point night in Oklahoma City. But behind the triples, a steady engine remained: Green controlling the action on the ends, serving as arguably the greatest Swiss Army knife in league history.

Green’s defensive prowess will power his candidacy to Springfield sometime around the end of this decade. He sports six All-Defense selections and one Defensive Player of the Year Award, with multiple top-three finishes behind multitime winners Rudy Gobert and Kawhi Leonard. And while both of the aforementioned defenders will have their own Hall of Fame busts one day, Green is perhaps the more versatile player. Gobert, valiantly as he may try, can’t dance on the perimeter like Green. Leonard is perhaps the best ball-hawking wing in league history. He doesn’t bark signals as a back-line anchor as Green does. As modern offenses reduce most defenders to specialists in a scheme, Green stands as the league’s most adaptable chess piece.

The first nine games of Golden State’s playoff run illustrate Green’s versatility. He’s at his most destructive when allowed to roam as a center fielder, wreaking havoc as a help defender as he pays scant attention to the weak link on an opposing offense. He wasn’t afforded such a luxury in Round 1. With Jokić on the other end, Green was forced to focus on a singular assignment. He was up to the task.

Jokić turned in his usual brilliant production against Green and the Warriors at first glance. He’s now the only player this century to average 31 points, 13 rebounds and five assists in a postseason (min. five games), and his effort came alongside a supporting cast that Nuggets coach Mike Malone compared to a Ford Pinto. Yet the impressive output omits the well of frustration caused by Green for much of the series. Jokić was ejected after a second technical during a blowout Game 2 loss, and his scoring totals across the series came at a far less efficient clip than usual.

Denver’s engine finished the series with 24 turnovers and just 29 assists. He was a minus-45 in the 63 minutes comprising Game 1 and 2. And as Denver tried to save the series late in Game 3, Green was there to stonewall Jokić once again.

“Draymond’s the best defender in the world,” Thompson said. “Without him, we’re not the Warriors.”

Green has reverted to a more versatile role in the second round. He’s blitzed ballhandlers without fear of a mismatch behind him in rotation—Golden State even won the rebounding battle in Game 4 despite 27 minutes from Memphis center Steven Adams—and there is no fear of any switch involving Green, especially with Ja Morant sidelined. Green and the Warriors are inviting long twos and contested triples against a now-limited Memphis roster, walling off the lane at every opportunity.

Green’s defensive brilliance took center stage in Game 4 as Memphis had one final chance to tie the contest down 98–95. Green jumped atop the key to meet Grizzlies point guard Tyus Jones, and he quickly maneuvered around Jones’s subsequent screen as the ball was shuffled to Memphis forward Jaren Jackson Jr. Green blocked the shot and began his roar to the crowd with the victory secured, embracing Curry shortly after in celebration. Curry’s words to Green were short but fitting. “That’s what you do.”

We should expect to see Green’s typical All-Defense impact carry through the rest of Golden State’s playoff run. Just how long that lasts could hinge on Green’s performance on the other end of the floor. Green still thrives as an offensive fulcrum whipping lasers from atop the arc, though recent games against Memphis have highlighted a troubling trend. As Green becomes increasingly reticent to shoot, Golden State’s offense could hit an uncommon snag.

The scope of Green’s résumé is jarring for a player with such little scoring upside. Green is one of three players this century to tally 50 win shares while scoring fewer than 6,000 points, and he’s now down to single-digit points per game in the postseason for the first time since 2013. The dip in scoring against Memphis is particularly notable.

Green has attempted just 13 shots across four games, and he is a whopping 0-for-1 from three in the series. He’s passed up numerous attempts at the rim for unnecessary kickouts, with layups and floaters standing as almost last-ditch options. Green doesn’t need to be a third Splash Brother or even a driver that demands help defense. But his passivity is tipping off the Grizzlies, who are free to overplay passing lanes without retribution.

This isn’t 2015 or ’16 anymore for Green. A 32-point game in the Finals is out of the question, and his previously modest burst around the rim has even taken a hit. Yet the beauty of Green’s game lies far outside his physical limitations. He’s a frontcourt hybrid with no analogues across history, pairing the defensive excellence of Dennis Rodman and Ben Wallace with the skills of “a distributor and a passer and kind of a point center,” according to Kerr. Betting against his shortcomings still feels as foolish now as it did more than a half decade ago, when Golden State rose from an NBA laughingstock to a dynasty.

Green fueled the Warriors across the last decade as Golden State redefined the sport. Now in a new era, he’s right back where he belongs.

“I love this time of year,” Green said. “It’s right in my wheelhouse.”

Draymond Green dancing to ‘Whoop That Trick’ as Grizzlies blew out Warriors was awesome, not controversial
This actually isn't a big deal.

Rockets rookie Usman Garuba: “I like to watch Draymond Green a lot. There are tons of clips of him on…

Draymond Green got the better of Jaren Jackson Jr. on Monday night

Draymond Green and his wife Hazel are committing $100,000 to start a fund honoring his late teammate Adreian Payne