Don’t Do Us Any Favors, Inclusion Is Profitable: Broadcaster Samantha Renke On The Power Of Disability Representation 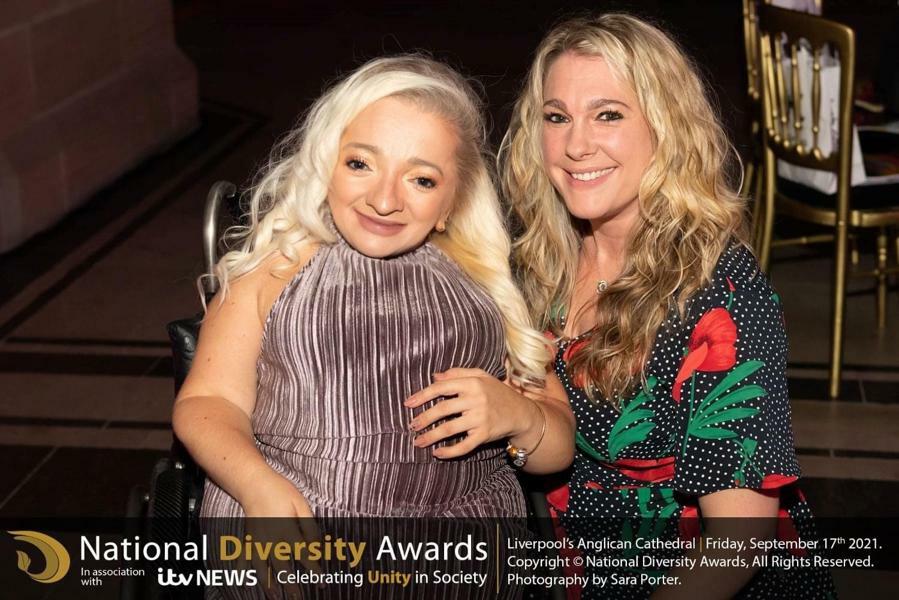 This week I was delighted to connect with actress, writer, campaigner and consultant Samantha Renke Having had great success in the movie Little Devil in 2013, Renke has forged a career for herself both as a successful disabled actress and broadcaster, but also by donning the hat of spokeswoman and consultant when it comes to disability inclusion.

So many of us in the D&I world have gotten into this work not only because it is morally a good thing to do but also because we needed to try and effect the kind of change that will directly benefit us and our families. We are personally invested. But there’s a message growing louder for businesses – we can be economically invested too.

I spoke with Renke shortly after her appearance at the Dive In Festival about her own career path and varied roles, as well as the changes she would like to see in her industry. She says, “what we need for a cultural shift is change from the bottom up”.

Renke recalls an exchange with her acting teacher who told her at age fifteen “people like you won’t get very far”. She says that although people are often outraged at her teachers’ words “if you look at where we were culturally, she wasn’t wrong. It might have been very harsh but she was saying the truth.” For this reason, Renke is reluctant to advise that disabled people should pursue their career goals at all costs. She says “I don’t want to be flippant and say if you want to do it go and do it, because being disabled is hard work. Not the disability or the individual, but society makes it hard work so I don’t want to be dismissive.”

However, Renke’s first film won awards overseas and opportunities from various charities started coming her way, with that more and more chances for TV work as well. Because of her media training and natural charisma, when a programme is looking to discuss disability she has become a go-to person.

Connecting with the wider disabled community through charity and advocacy work has allowed her to “fall in love” with her disability identity and this is very evident when you hear her speak.

She very correctly points to the lack of support and stigma that many people experience and the mental health struggles that can also come with that. But she does have some advice for young disabled people thinking about their future plans saying “My main takeaway is to be clear in what you want and be bold when you articulate that. Ultimately, it’s your life and irrespective of whether you have a personal assistant, however your disability may look and whoever is involved in your life, it is not their life.”

Becoming The Centre Of The Narrative

Renke has a lot to say on the subject of pushing back against people who seek to pigeonhole her, she refers to the decision makers within her industry but also others as “gatekeepers” and wants them to leave their egos at the door and open their minds to a learning opportunity.

As she so rightly points out, disability inclusion and diversity in general is good for business. If the gatekeepers who are so closed off to the idea of a changing disability narrative could let their guard down a little they would see that they are not doing someone a favor, they are actually benefitting themselves when they take steps to address exclusion.

In order to produce services and content that disabled people will want to consume, and it’s worth pointing out that the “purple pound” (a term used in the UK for the disabled spending power) is worth around 274 billion annually in the UK. The discretionary spend of disabled people in the USA is estimated at nearly $500 Billion per annum. Renke explains:

“We have a movement in the disability community, and it says nothing about us without us. It means that whatever you do that is disability centred, even if you just utter the word disability, disabled people need to be at the heart of that. So that means listening to us.”

When directors, producers and writers listen to us they don’t make mistakes that end in backlash and a loss of earnings as we saw with Sia’s movie Music.

Renke argues that it is time to move on from the two-dimensional representation we so often see where disabled people are concerned. Usually portrayed either as a tragedy to be pitied or an inspiring hero to be put on a pedestal and wonder at their bravery and resilience, where are the relatable characters? This un-nuanced view of disability Renke says contributes to the disability perception gap where much of the general population has very little knowledge of our lives. She says that now when people tell her she is inspiring she challenges them saying “if I inspire you, what have I inspired you to do? Will you come with me to campaign for disabled rights?”

Renke famously appeared in a series of adverts which were very successful because they showed a more real side to disability. The characters in these adverts were cheeky, funny, ordinary people. We don’t usually get to associate characters like that with disabled people on screen. As ground-breaking and well received as these ads were there hasn’t been anything similar since. They were a huge success but now that box has been ticked the media has moved right on. It is frustrating to feel like a novelty project rather than an opportunity to reach a different audience.

Renke says “Why do we restrict ourselves to just being this or that? I am highly motivated and quite competitive, and I like to have a varied life. She goes on to say “Apart from it being my personality and my natural authentic self, it’s also because of my disability that I do feel like I have to over-achieve. We get pigeonholed as can’t, shouldn’t, won’t.” Why in 2021 are we still fighting this stigma when we have proven how much we have to offer?

For this reason, actresses like Samantha Renke will continue to have to wear multiple professional hats because if we want to see wider inclusion both in front of and behind the camera we have to keep speaking out and pushing back. We need to be working towards a place where the onus isn’t constantly on disabled people to carve out a corner for themselves. Celebrating disability and offering accommodations pre-emptively should be high on the agenda for all of us.

So my resounding thought, listening to Samantha’s Story, is about how every time we have to ask for a flexibility, we are faced with the diminishing power of needing to be helped. In disability legislation worldwide, we talk about “Universal Design” as well as “Reasonable Accommodations.” Universal design means that buildings, technology, processes are built with the full spectrum of end user in mind. This mean accessibility software as standard compatibility on all websites, it means all buildings with step free access. It means workspaces that don’t create sensory overwhelm. It means predicting that some will need accommodations and building those in as standard, rather than as a favor. This is the law of the land, but too often businesses are falling back adjustments after design. According to a 2018 paper at the American Institute of Research, 73% of disabled people experience barriers in e-commerce.

To borrow the words of the great Reese Witherspoon, Disability inclusion isn’t a “public service project, it is a big time, bottom-line enhancing, money making commodity.” Our disability champions are pointing us in a win-win direction, through which we have the ability to attract and retain untapped talent and reach an untapped market. To get there, representation needs to come as standard.

Thank you Helen Doyle for your essential contribution to this article.