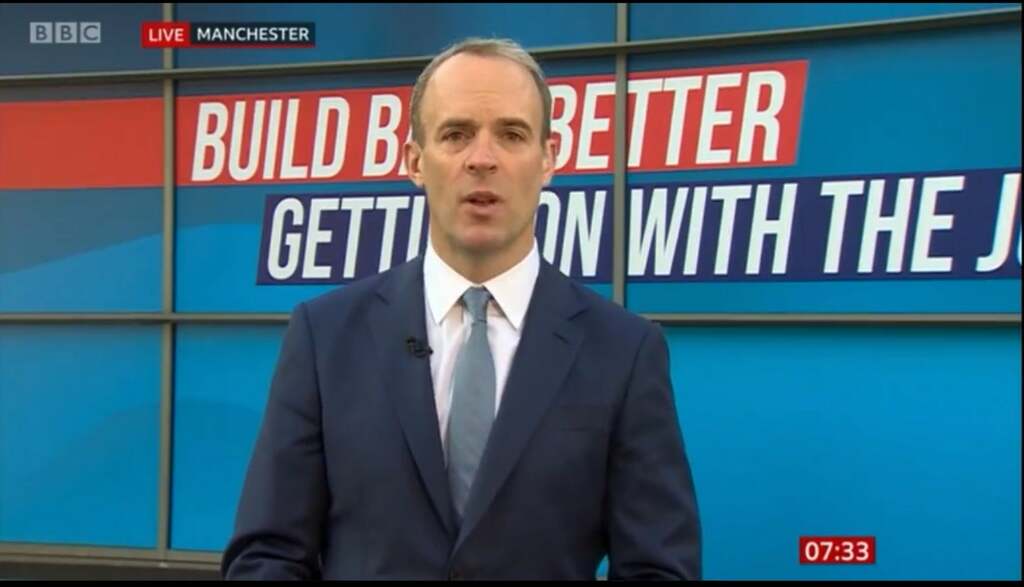 Dominic Raab has a way with words.

He recently hit headlines by claiming that the “sea was closed” when he holidayed in Crete as Kabul was falling to the Taliban and he once said he “hadn’t quite understood” how reliant UK trade is on the Dover-Calais crossing, while slowly cleaning up Brexit in 2018.

Today, he has revealed that there is something else he hasn’t “quite understood” by making some truly remarking comments about misogyny.

Speaking on BBC Breakfast, and no doubt making people choke on their own breakfasts, the minister said: “Insults and misogyny is of course absolutely wrong whether it’s against a man against a woman, or a woman against a man.”

“Misogyny is absolutely wrong, whether it’s a man against a woman, or a woman against a man” pic.twitter.com/fTmPWkb9VU

This is, of course, not the meaning of the word, so thankfully BBC host Sally Nugent interjected and said: “The dictionary definition of misogyny is hatred against, directed towards, women,” as the gears in Raab’s brain whirred slowly.

Reassuring scenes on #BBCBreakfast as Justice Secretary Dominic Raab has the dictionary definition of misogyny read out to him pic.twitter.com/fLMBiMoPJd

Later on in the programme, Nugent asked Raab to clarify what he meant but he did not refer to his thinking misogyny could be directed at men and women and restated the party line that misogyny should not be made a hate crime.

“What I meant is if we are talking about things below the level of public order offences of harassment, intimidation, which are rightly criminalised,” he said.

“If we are talking about effectively insults with a sexist basis I don’t think that criminalising those sorts of things will deal with the problem that we have got at the heart of the Sarah Everard case, which is a question partly around the police but also the broader question and the fear women face that their cases don’t get to court and don’t end up with a conviction.

“And therefore just criminalising insulting language even if it’s misogynistic doesn’t deal with the intimidation and the violence and the much higher level of offence and damage and harm that we really ought to be laser light focused in on.”

Reacting to his comments, people were pretty stunned:

Dominic Raab desperately trying to work out how to mansplain that misogyny can be directed at men pic.twitter.com/QBdSv3eK0l

Of course Dominic Raab wants to claim that misogyny can be directed against men, this is a government full of people who desperately, desperately want to be victims despite the inconvenient fact of their position in power for over a decade

Both an Oxford and a Cambridge education. Stunning.

Oh dear. Perhaps his dictionary “was closed” too.