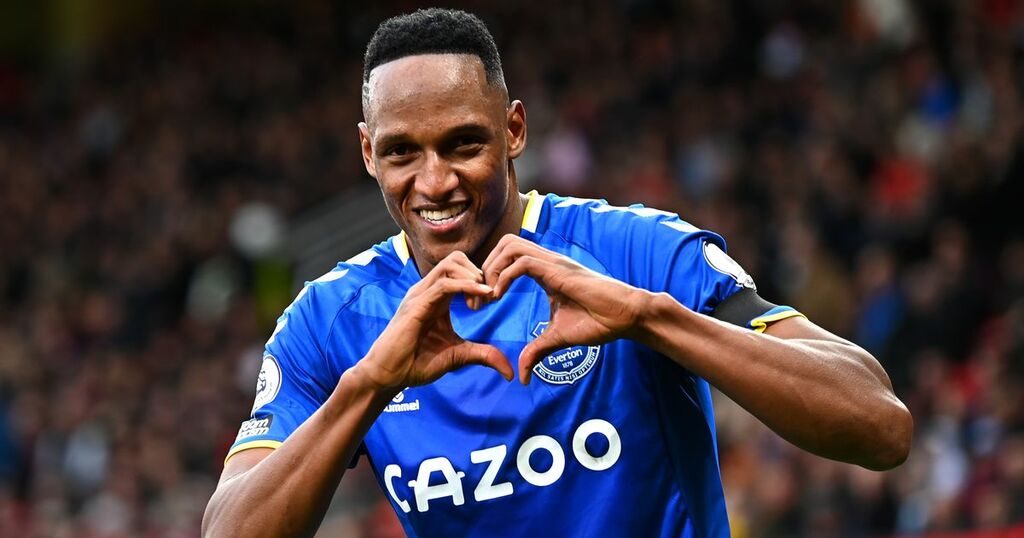 While others might have grabbed the majority of the limelight, Yerry Mina has been in impressive form for Everton this season.

The centre-back has been a regular at the heart of Rafa Benitez's defence for the majority of matches throughout the term and was a key part of his side's 1-1 draw with Manchester United on Saturday.

In fact, he could have potentially been the match winner if he had just held his run for a second longer, latching onto Tom Davies' pass late in the game before his goal was ruled out for offside.

However, the defender is out-of-contract with the Blues at the end of the 2022/23 season, which brings up the question of whether he should be offered a new deal.

Our Royal Blue Podcast host Sam Carroll was joined by Adam Jones, Chris Beesley and Dave Prentice to debate the centre-back and whether he should stay at Goodison Park a little while longer than his current contract.

Sam: You do have to love Yerry don't you, he scored his goal and must have thought it might have been offside. But he didn't care, straight over to the corner with the dance moves out.

Adam: Dance moves out, fan in the crowd giving it the big one with the hand gestures.

It was a typical Yerry Mina performance that we've seen so far from him this season. You don't really notice what he's doing, he just casually does his thing brilliantly.

Manchester United didn't have joy against him. I can't imagine a time Edinson Cavani went up against him, he wouldn't have won that battle. Even after Cristiano Ronaldo came on I can't remember him having a direct duel with Mina.

It's just a testament to how well he's playing this season. He's solid as a rock at the back and even going to a place like Old Trafford doesn't bother him.

Maybe in past seasons we'd have been worried about potential mistakes, but he hasn't had that at all this year. He's been hugely composed, and hopefully he can keep himself fit enough to have a good run of games.

I think he's probably our best centre-back in terms of bringing the ball out and starting attacks from that back line as well, that's the kind of thing we want to see.

It's very interesting that he's out-of-contract at the end of next season, he seems to be a prime candidate I would say for a new contract at Everton.

I know some might still believe he's a prime candidate for us to potentially cash in on but I just don't see that at all. He's still 27, he's still got ages left in him especially with the way he plays the game.

I'd love to see the club prioritise a new deal for him. It's performances like that, cruising through the game as comfortably as he did, that's the kind of Yerry Mina we want to see.

Sam: It's been an almost quiet emergence for Mina, he's a real leader in that back line.

You don't want any player, starting the majority of games, to be entering that grey contract zone where other teams might start trying to unsettle him.

Would you agree that a new deal should be a priority and he is at this point Everton's best centre-half?

Chris: Certainly I agree with the first part of your question. In terms of a deal, like you said, he's at the peak of his powers and you don't want to potentially risk losing someone like that on the cheap.

In terms of whether he's the best, only time will tell. I don't think there's much between them.

Certainly he's the one in form, you can't question that. But certainly you'd hope in the next year or two someone like Ben Godfrey would really emerge.

It's strange at the moment, playing at right back and doing a job for the team again. He'd be the one you'd think could continue to progress over the coming years.

Yerry Mina is certainly the most dominant figure in there at the moment. Mina seems more of the leader in there.

The big thing is cutting out those mistakes from the past, there was maybe always a fear he'd switch off for a moment. Eradicating those mistakes is huge for someone in his position.

We're seeing Mina very much at the peak of his powers right now.

Sam: Are you a similar fan of Yerry Mina, Dave?

He's had a very good season and hasn't put a foot wrong so far. But I think we've discussed in the past whether he should or shouldn't be offered a new long term deal.

He's 27, and the problem with him is consistency in terms of fitness - he picks up injuries quite regularly and has to sit out for a month here or three weeks there.

Do you want to offer a long-term contract to someone who maybe isn't as reliable as other members of the squad?

We've got Ben Godfrey who you'd think would be the heir-apparent, we all think he's going to be a very good footballer, and we don't know how Jarrad Branthwaite will develop also.

I like Mina, I like what he's done this season. He's got great personality about him! He is a bit of a leader out there as well.

I wouldn't be against it, but I'm also not massively sure if I want him to be offered one. Rafa might have his own ideas about players elsewhere.

It's quite a long-winded answer to say I don't really know! I'm not sure it's the right idea yet.