Dom Young nails The Fox, and his own position

IT was a play that arguably won Newcastle the game, and a display that may have cost Bulldogs flyer Josh Addo-Carr his title as the "fastest man on the planet".

With little more than 10 minutes left to play against the Bulldogs last week, and with his side leading by only four points at 10-6, Knights winger Dom Young was forced to turn and chase his opposite man Addo-Carr.

The renowned speedster, nicknamed "The Fox" and often referred to as the "fastest man on the planet" by Nine commentator Phil Gould, had found space near the halfway line and taken off down the left flank.

Knowing the Bulldogs winger's speed, plenty of spectators likely assumed Addo-Carr was almost surely about to level the scores.

But Young had other ideas.

The part-Jamaican Pommy sized up The Fox and went in for the kill, turning on a blistering bit of speed over 20 metres to drag him into touch. It was a key play that at the very least ensured Newcastle held the lead at a critical point in the game.

"Knowing how fast he is, I just had to pin my ears back," Young told the Newcastle Herald of his effort.

Young, who was somewhat surprisingly ranked the game's fourth-fastest player earlier this year, always considered himself a chance of matching The Fox, but was pleased to have been able to.

"It was pretty fun going against him and I'm happy I made the tackle. It was 10-6, so obviously if they go down [for a try] there it could have been a different story."

The play carried an extra sense of reward after Addo-Carr got on the outside of Young in the first half to score Canterbury's first try.

The Knights went on to claim the match 16-6, moving from last into 14th place.

The gritty victory broke a seven-game losing streak, a disappointing run which followed an exciting start to the season with consecutive wins. But through all the bleakness, one shining light has been Young's form.

Among the side's best before a knee injury forced him to miss three games, he picked up where he left off against the Cowboys a fortnight ago - scoring Newcastle's first try in two-and-a-half games - before his performance against the Dogs.

Even accounting for his injury lay-off, Young has managed to feature in one more game already this year than the six he played across the entire 2021 season.

He has also produced the same strike rate as last year, scoring four tries in his first six games this campaign.

Young's goal coming into this season was to nail down a starting position, and with experienced outside-back Hymel Hunt sidelined since pre-season trials with injury, he has become a first-choice winger for the Knights.

Still only 20, he feels he has performed well in 2022 but is taking nothing for granted as the season rolls on.

"I feel like I'm playing pretty consistently now and my knee is feeling good," Young said. "I'm kind of building nicely this year so hopefully I can keep playing consistently and hold my spot.

"I don't know if I've nailed down that spot as such, but I think if I keep doing what I'm doing, hopefully they'll be happy with that. I feel like I've been playing good rugby."

In just his second season at the club, Young feels accustomed to the rigours of the NRL after making giant strides in the preseason.

He came flying out of the blocks with a stellar performance in round one and has been one of the team's best in most games since.

With fellow Knights winger Edrick Lee announcing this week he will depart the club at season's end to join the Dolphins, Young's place in the side looks a little more certain moving forward.

But the 200cm-tall Brit is not looking that far ahead. He said Lee, who is only four centimetres shorter, would be a big loss for the Knights.

"He will leave a big hole. Not only what he does on the field, but what he does off it," Young said. "He lifts everyone up, he brings a lot of energy to training. He's going to be missed."

It was ironically Lee's year-long absence that likely helped Young make an early-season debut in his first year at the Knights. Back on deck this season after overcoming a foot injury, 29-year-old Lee has offered Young "plenty of tips".

"He has helped me a lot," Young said. "He's experienced and been there and done it. Anything I can soak up off him is going to help me. I definitely try and learn off him for sure." 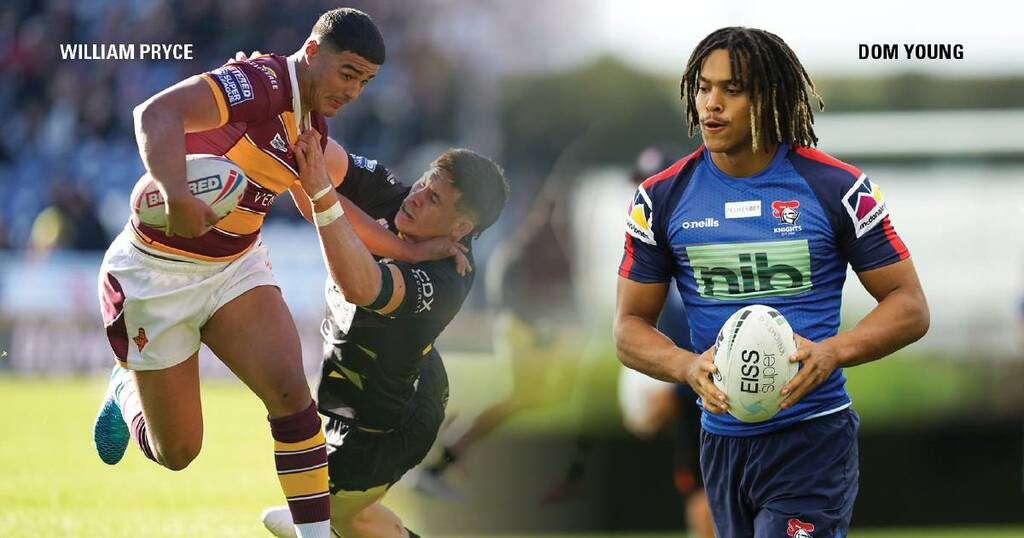 Pryce would be an X-factor signing for Knights: Dom Young
Young believes Pryce could 'bring a lot' to the Knights.

Oliver Smith, 28, was described as a 'unique character' who had a 'difficult pandemic'

An injury to Tom Trbojevic is cause for concern for Manly and NSW, as Parramatta rally late to beat the…