Dolch: Goodbye to a best friend and a perfectionist. Rest in peace, Tim Rosaforte. 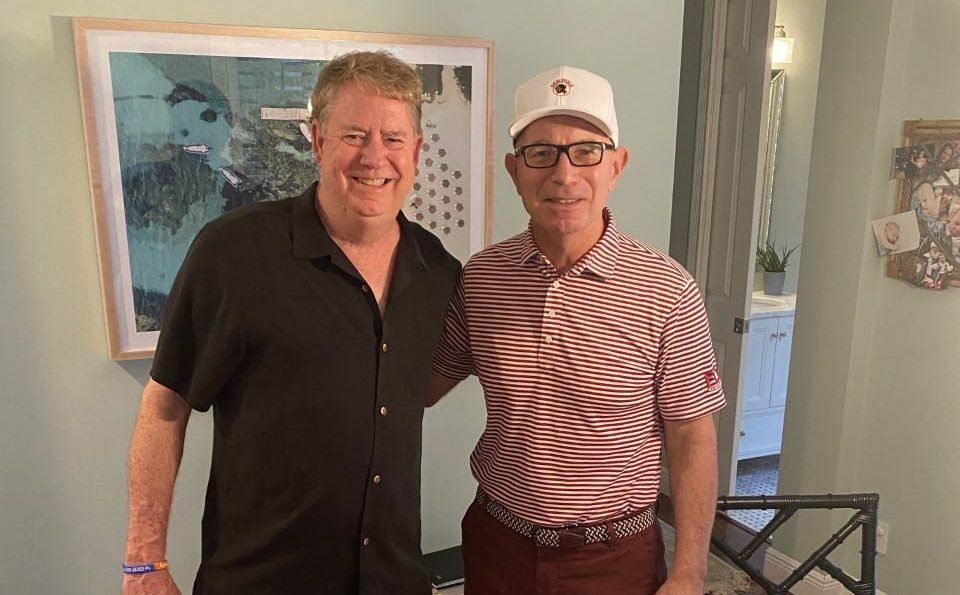 I have had the honor of being close friends with Rosie, as we all called him, for almost 40 years. I was moving into a condo in Tampa in January, 1981 and Tim was the one moving out, headed to South Florida where he would meet his wife Genevieve, raise daughters Genna and Molly and start a career that would take him to the top of the journalism business.

Less than two years later, I took a job at The Evening Times in West Palm Beach and ran into Rosie at a PGA Senior Championship at PGA National. We have been best buddies ever since.

Hard to believe Rosie was doing his thing on Golf Channel almost two years ago and today he is gone at the too-young age of 66. Alzheimer’s doesn’t care how famous you are, how much you’re loved, how hard you’ve worked, how many zeroes are in your account and how much you have given to others.

Tim knew he was having memory-loss issues when he retired from TV at the end of 2019. Like most who have this insidious disease, he thought he would beat it or at least hold it off.

He tried to turn his diagnosis into a positive. “I haven’t been around my family a lot because of work,” he said, “and this gives me a chance to be with them and their loved ones.”

Tim never gave up. His body just gave out.

He lived long enough to see Genna and Molly recently triple the number of grandchildren in the family from one to three. He got to hold the precious little ones while their parents held on to hope.

Rosie became golf’s first media “insider,” someone who knew professional golf’s inner workings and had the trust of the biggest names. They knew if Tim called, it must be a big story.

There were few famous people who didn’t give him their phone number. He was so famous he carried around two phones, so not to miss a call. You could call him Timmy Two Phones.

He fought long enough to be honored in ways journalists usually aren’t honored.

The PGA of America made Rosie the first journalist – and 12th person – to receive an honorary membership.

Jack Nicklaus’ Memorial Tournament presented Rosie with the Memorial Golf Journalism Award last year. Tim was unable to attend the ceremony, but his good friend Jim Nantz – who won the 2019 award – presented the award to Rosaforte

This award was poignant for several reasons: The relationship between Jack and Tim goes back farther than ours – they first crossed paths at the 1980 PGA – and was so meaningful to the sport.

Nicklaus was perhaps the greatest interview of all time, and Rosaforte cultivated this relationship. They lived less than 10 miles apart, Rosie in Jupiter’s Abacoa subdivision and Jack at Lost Tree Club in North Palm Beach.

It was also fitting Nantz presented the Memorial award because it was Nantz who reached out to Rosaforte in 2020 when he learned of his health issues and invited him to the Nantz National Alzheimer Center in Houston. After Nantz’s father died from the disease, Nantz created the NNAC in 2011. It has treated thousands of Alzheimer’s patients every year.

The Honda Classic, the hometown PGA Tour event that Rosaforte so proudly supported, last year named its Media Room after Tim and created the Tim Rosaforte Distinguished Writers’ Award, which he was appropriately the first to receive. Sadly, Tim won’t be around for this year’s Honda Classic in six weeks to congratulate the next winner.

Most recently, the University of Rhode Island, where Rosaforte became the first member of his family to attend college and earned a journalism degree in 1977, endowed a scholarship in Rosaforte’s name in Neuroscience.

That’s the most a person can hope for – they made a difference and made this world a better place.

That was Rosie. If you walked into a media center, you’d be hard-pressed to find someone who Tim didn’t have a positive impact on their life. Whether it was advice, encouragement or an occasional kick-in-the-butt about your attire, Rosie was always there for you.

I can attest to that more than anyone. When my then-14-year-old son Eric almost died from encephalitis in 2005, Rosie didn’t just send flowers. In early 2006, he arranged a fundraiser the week of the Honda Classic that included all the big stars locally. Jack and Barbara. Raymond and Maria Floyd. Don Shula. Nick Price. Jesper Parnevik. Olin Browne. Bob Toski. Dana and Brett Quigley. JoAnne Carner. Tom Fazio. Jimmy Roberts, et al.

All Tim asked of me was a list of family and friends I wanted invited. He did the rest. The money raised that night enabled us to buy a wheelchair van and make the modernizations to our home.

How do you say thank you to that? It doesn’t seem enough.

Rosaforte put others before himself

That was Tim Rosaforte. As big as he became in the business, he always thought of others.

He loved attending concerts, especially the Eagles and Steely Dan, never stayed out late, rarely drank more than two beers and always was there with advice.

If Tim had a flaw, said his brother Andy, “it was he was too driven. Too much of a perfectionist.”

Not a bad flaw to have.

I occasionally walked to the Honda Media Center with Tim when we entered PGA National, but would rarely make it there with him because Rosie would be stopped by so many people. And he knew all their names.

I once asked Tim how he remembered everyone’s name. It wasn’t just because he had a good memory. “It’s just like a PGA Professional,” he said. “When a member walks in your door at 7 a.m., you better know their name.”

What I wouldn’t do to call him and hear his voice. On either of his phones.