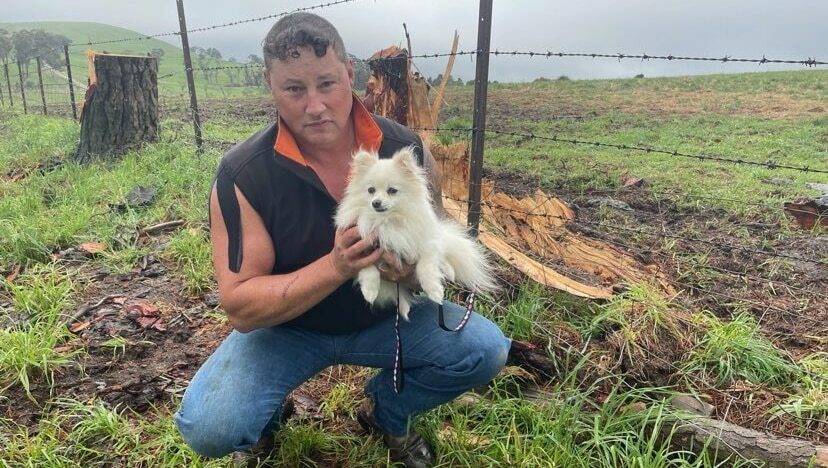 A dog that was sucked up and tossed 300 metres by a tornado on the New South Wales Central Tablelands has returned home after two weeks at the vet.

The September 30 twister carved out a 30-kilometre path of destruction between Bathurst and Lithgow.

Pom Pom the Pomeranian weighs 1.5 kilograms and her owners say she stood little chance of staying on the ground in the storm, which ripped off roofs and demolished houses.

She was picked up and thrown into a nearby paddock.

Her owner, Scott McKinnon, had his house at Meadow Flat near Lithgow flattened in what he described as the most destructive 30 seconds of his life.

The 115kg tree lopper and world record-holding coal shoveller clung onto the kitchen bench for his life as the tornado struck.

Once back on his feet, Mr McKinnon saw outside the window what he described was "like a scene out of the Wizard Of Oz".

Pom Pom was in the air — along with some of the neighbour's cows — spinning about 20 metres high alongside debris.

Given up for dead

The kennel she was resting in when the tornado hit is nowhere to be found, and her blanket remains stuck 30 metres up a pine tree.

It is a wonder Pom Pom only sustained a few broken ribs and a punctured lung.

Her owners thought there was no way she survived so they focused on helping other animals before going to retrieve her more than an hour later.

"We gave up on Pom," Mr McKinnon said.

It was only when they heard a bark in the distance they realised she was holding on.

After two weeks of recovery at the local vet, Pom Pom will keep resting up at her owner's dad's home until the McKinnons can rebuild.

Keeping Pom Pom still has proven hard — you'd be unable to tell she'd had a traumatic brush with a tornado.

Remnants of the house were found about 20 kilometres away at a town called Tarana.

Mr McKinnon and his partner have spent the past two weeks salvaging what they can and pushing what cannot be saved into a pile for the tip.

"It's been non-stop cleaning up," he said.

Persistent wet weather has slowed the process and left a few vehicles bogged in the meantime.

They plan to rebuild but with some more storm-friendly materials and a stronger frame so the house will not be lifted from its foundations again.

About 20 kilometres away at Clear Creek where the tornado originated, the Saba family is also trying to get their life back on track after losing most of their home.

Morris Saba escaped unharmed after the living room walls collapsed on the couch where he was sitting just moments before the twister came through.

The family is yet to work out whether they will demolish what is left standing or if they will rebuild altogether.

"But you look at the news, you look at what other people go through, and it always runs through my mind: Could it be us one day?"

It has been a community effort to get back on their feet.

"It's just step by step and moving forward," he said.

In the meantime, Mr Saba and his wife are staying with family nearby and cleaning up bit by bit every day.

In an ideal world and "god willing", he said Christmas would be around the dining table at Clear Creek.