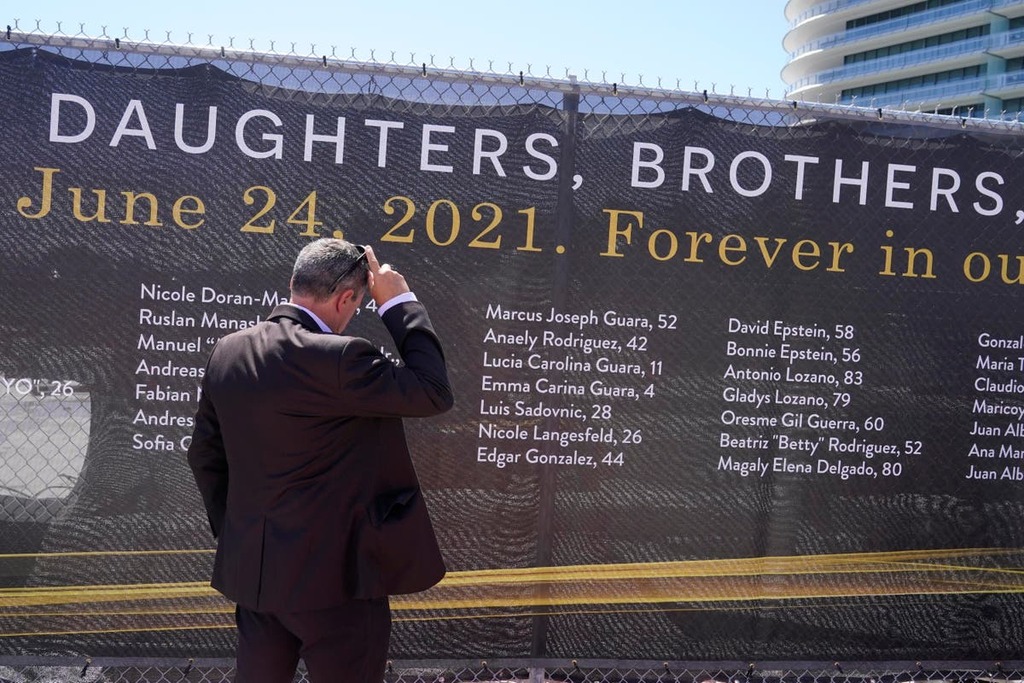 A class action lawsuit brought by the families of the victims and survivors of last June’s condominium collapse in Surfside,…

SURFSIDE, Fla. — When people pass through Surfside, Ronit Naibryf wants to make sure they haven’t forgotten her son. Pablo Langesfeld wants them to think about his daughter. Chana Wasserman wants her parents remembered.

They were among the 98 people who died in the Champlain Towers South building collapse nearly a year ago on June 24.

While plans for a permanent memorial have yet to be determined, the town of Surfside commemorated the victims Thursday by wrapping the site of the former 12-story condo building in 7-foot-tall banners listing the names of the victims and their ages.

“Fathers, Mothers, Sons, Daughters, Brothers, Sisters” was written across the top of each of the 60-foot-long black banners. The town installed seven of the banners along Collins Avenue and the beachfront side of the nearly two-acre lot at 8777 Collins Ave.

Pedestrians and drivers paused to look as workers finished hanging them during a press conference attended by relatives and politicians.

“For us, the family members of those deceased, we remember every day,” Naibryf said. “This is for the public, for you, and for everybody else around here to remember. And that’s what I ask: Do not forget.”

Her son Ilan Naibryf, a 21-year-old University of Chicago student, died with his girlfriend Deborah Berezdivin, at the Champlain Towers South while they were in town to attend a funeral.

“He would be due to graduate this June,” Naibryf said. “He was athletic. He was happy.”

Surfside Mayor Shlomo Danzinger said he wanted to honor the victims at the site of the collapse, because previously the area resembled a construction zone with a green windscreen and no markers of the tragedy.

“It was unassuming and it looked like any other construction site going on in South Florida,” he said at the press conference.

The banners are expected to only be up temporarily, as the property is headed for sale. A billionaire real estate developer from the Middle East has offered to buy it for $120 million.

Town spokesman Frank Trigueros said Surfside received permission from the receiver for the Champlain Towers South Condominium Association to install the banners indefinitely. He added that the town hopes to have them up “for as long as possible.”

Danzinger said while he respects private-property rights, he hoped to sit down with the future buyer to discuss the issue.

Wasserman — whose parents Ingrid “Itty” Ainsworth, 66, and Tzvi Ainsworth, 68, died in the collapse — said at the press conference that the banner was a “reminder of the sacred lives that were lost here.”

“This sign is to help a world that keeps moving to stop and remember the 98 lives that were lost here,” she said. “Ninety eight daughters and sons, and brothers and sisters, and mothers and fathers. They must be honored and remembered always and forever.”

Langesfeld, whose 26-year-old daughter Nicole “Nicky” Langesfeld died in the collapse, thanked Danzinger and the town for honoring the victims.

“It is a small token of appreciation but it means a lot to us,” he said.

Nicole Langesfeld, a commercial litigator in Miami, died in her home with husband Luis Sadovnic, 28. Her father said he looks forward to a permanent memorial being built.

Langesfeld is a member of a Surfside family committee that will consider plans for a memorial after it helps organize the one-year anniversary events in town next month. Naibryf and Wasserman are also members of the committee.

The Florida Legislature voted in March to allocate $1 million for a Champlain Towers memorial. The Surfside commission voted in January to designate 88th Street, which abuts the collapse site, as the location of a future memorial.

“We will be working together for a memorial,” Langesfeld said. “It is going to be so nice and beautiful that people from all over the world will stop by and pay their respects.”

A class action lawsuit brought by the families of the victims and survivors of last June’s condominium collapse in Surfside,…