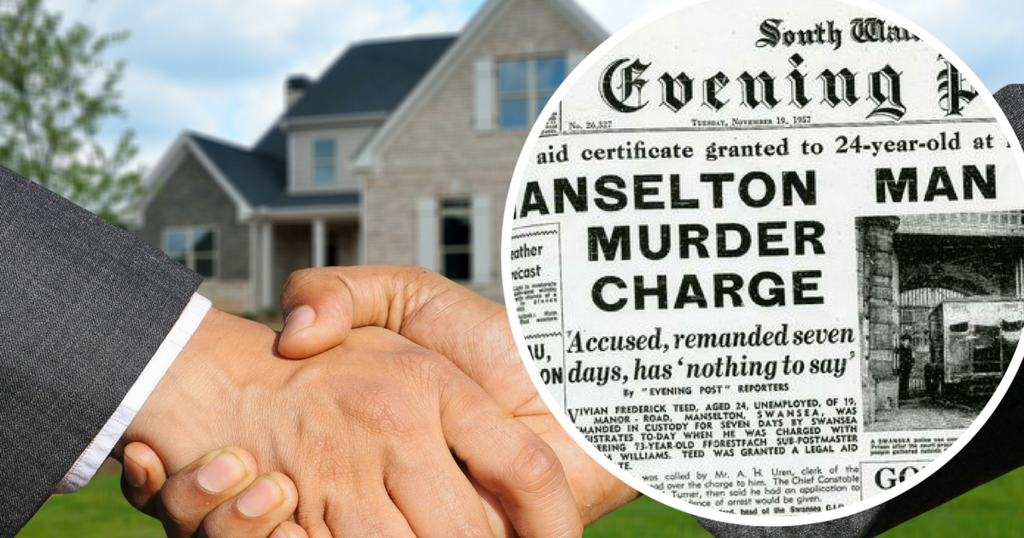 Imagine moving into your dream home and finding out, weeks later, that you had nightmare neighbours living next door.

Or that the street was subject to intense parking wars.

Worse still, imagine discovering that someone had been murdered at the property.

Or that it was rumoured to be haunted. Or used as a former cannabis farm.

For some people, this information could mean the difference between signing on the dotted line and opting out of a sale.

Estate agents often tell us things like the price of a property, what's included in a sale and whether any major work has been carried out.

After the law changed in 2013, they were made to disclose “fair” information to homebuyers and sellers.

That included making “material information” about a property clear, unambiguous and not deliberately misleading or withholding information from buyers.

But how far does this go, and exactly counts as "material information"?

We decided to find out.

We asked two property professionals to answer some of the more unusual questions we've always wanted to ask estate agents.

Nick Masters is an estate agent and business development manager with Mr Homes, who have agencies across Cardiff in Grangetown, Fairwater and Cowbridge Road.

David Beaumont, who previously worked for the Trading Standards Service, is now the managing director of Compliance Matters, who advise estate agents on things like legislation and the obligations on them.

Here's what they had to say:

Do estate agents have to tell buyers if someone has died in a property?

"These questions come up on a fairly regular basis from our agency clients and so you might get a slightly different response from Trading Standards or the TPOS," David said.

"Additionally, there is the issue of whether an agent was aware of any of the issues.

"Buyers always assume the agent knows everything, but in reality, they only know what they are told or what they can reasonably discover.

"There are no legal precedents to any of these questions and it is unlikely there will be any, but maybe the odd one might go to higher courts to create one.

"Trading Standards have provided Assured Advice on this to the Property Ombudsman that says deaths in properties is not material information and so does not need to be disclosed."

However, Nick - a qualified member of the National Federation of Property Professionals and who has more than a decade of sales experience - would slightly disagree with this.

He said his company would indeed disclose if someone has died at a property, but only if that information is made available to them.

"Quite often vendors may withhold this from us or keep that information to themselves," he said.

What if someone was murdered at a property?

In May 2018, we spoke to a couple who were left horrified after taking over a Post Office from a murdered postmaster in 1957.

Alfred Thomas and his wife Audrey were the new owners of Fforestfach Post Office, after Mr Thomas was the only bidder, spending just over £4,000.

But their excitement soon turned to horror after they stepped foot through the doors for the first time to find it completely covered in blood.

Former postmaster William Williams had been beaten to death there with a hammer aged 73 on the night of November 15, 1957.

Police did not clear the scenes of crimes back in those days, so it was up to Mr Thomas to deal with what he had found before he began.

While (we hope) that would never happen today, the idea of a murder having been committed at your new property is still daunting.

But is there anyway we can find out about this?

Nick said: "If this does happen, depending on the circumstances, it usually is historic and with the power of the internet and social media most potential viewers will already be savvy about that information - as long as it has been released and made public."

Has anyone been buried in the garden, or has the property been built on an old cemetery?

In June 2017, a controversial plan to build on land where a number of graves are located was revived by the Church in Wales.

The idea of putting houses on disused land at St John’s, in Tonyrefail, fizzled out after it caused upset in 2008.

But another application came to light in 2017, which outlined plans for 14 homes to be built at the Llantrisant Road site.

But do estate agents have to tell you if someone is buried in the garden of your dream home?

"The simple answer is - that it will depend on the individual circumstances," David said.

"You might think some are fairly black and white, but they aren’t.

"Additionally, there is the question of whether the agent was aware of the burial – which seller is going to divulge this information when they want to sell it?

Nick also said: "If someone is found to be buried in the garden, yes we'd absolutely say - followed by a phone call to the police to let them know.

"Although, in central Cardiff, we don’t really come across it and if we do then its usually one big history lesson for everyone."

Has a crime has ever been committed at a property?

In July 2018 a huge cannabis farm was discovered in a £300,000 house in the popular Radyr suburb of Cardiff.

Officers found a large-scale cannabis factory with approximately 250 cannabis plants located on the first floor and in the attic.

After the case people living in the area reported having been able to smell cannabis before the raid took place and said it wasn't "the sort of area where they would expect this to happen".

So, do estate agents have to tell you if a property was used for crime.

Nick said he'd always tell a potential buyer if a crime had been committed at a property - as long as they have been informed about it by the seller.

"If we are aware of that information up front - it is usually down to a previous tenant and the owners will normally renovate before marketing," nick said.

David added: "Trading Standards have given assured advice to say that [for example] if a paedophile is selling a property this information is not material information.

"I completely disagree with this opinion and so do most agents, but TS have given the advice and so agents can stand by it if they wish."

Has a property ever been burgled or targeted by burglars

Nick said that although he would choose to disclose this information, it is not normally the sort of thing that's disclosed or discussed upfront by a seller.

"If so improvements have usually been made to prevent this happening in the future," he added.

Is a property rumoured to be haunted?

"If you could prove a property was haunted it would be material, but clearly no one can prove it," David said.

"The question might be – is the average consumer affected by an allegation of a property being haunted. You might get a different answer then?"

Meanwhile Nick said his agency would absolutely tell a potential buyer if there were rumours a property was haunted.

"The property could even make for some ghost stories whilst conducting the viewing," he said.

Does the property have any nightmare neighbours?

In 2018, couple - Desmond Hughes, 70, and his partner Claire Anderson, 55 - appeared in court over a long-running dispute with their next-door neighbours over a boundary wall at their Cardiff home.

Similarly, in November 2017, an Amman Valley man was made subject to a restraining order, after he was found not guilty of assaulting his neighbour during a decades-long dispute between the two men.

A court heard the row had culminated in one of them allegedly being pinned to a wall by a JCB, but no guilty verdicts were returned.

Another woman called Teena Daley, from Cardiff, also got caught up in a “neighbourly dispute” and bit off part of her victim’s ear and spat it out after pulling her hair and punching her in December.

But according to David, this sort of information is not usually classed as being "material" by Trading Standards.

"A neighbourly dispute can be cause because two people don't get on, so when the seller moves out the problem is solved," David said.

In response to this question, Nick also added: "Again this is something that quite often is kept private or possibly not disclosed to us."

Are there parking wars on the street?

Police told neighbours rowing over parking in a Swansea suburb in 2018, that parking outside their home is 'a privilege, not a right'.

Letters were sent to people living in Christopher Road and Orpheus Road in Ynystawe after "friction" between residents and drivers over parking on residential streets which are unmarked without allocated spaces.

It was suggested that some residents even used items to save themselves a space, which police said was unlawful and unacceptable and would be deemed as obstructing the highway.

David said that this sort of information is not usually deemed as being material by Trading Standards and so would not have to be disclosed.

But Nick said that parking wars can usually be a "big factor" when selling a property, especially when it comes to certain locations.

And while he would choose to tell a potential buyer about this, he said: "Typically that kind of property [with parking issues] would suit a person who may be happy to use public transport or cycle," he said.

Have there been any complaints made about the property?

Nick said: "Yes, if disclosed and if we believe it could impact on the decision of the buyer, we would tell them - as we wouldn't want to mislead someone or waste time."

How many sales have fallen through?

"This will depend on why they have fallen through," David said.

"It is estimated that between 25% and 35% of agreed sales fall through - all for differing reasons, that would not be material to a new buyer.

"However, if sales are falling through for one specific material reason then I think it should be disclosed."

Nick also said: "With such a buoyant market in Cardiff this can now quite often be down to buyer circumstances or change of heart.

"This information is quite often available on the property portals that they are marketed on too."