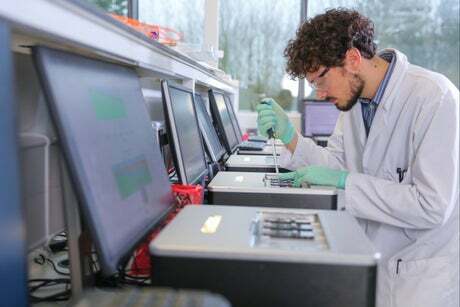 Oxford Nanopore today confirmed its intention to float in London this year in a highly-anticipated IPO which would value the gene sequencing pioneer at upwards of £2.5billion.

The biotech, whose desktop and portable products enable the real-time and low-cost analysis of DNA and RNA by researchers both in the lab and in the field, intends to launch on London's main market in what will be a major coup for the City.

Its technology sequenced the genetic code of the Covid-19 virus to track the emergence of variants around the world and is also used in cancer research, viral outbreak surveillance and crop science.

The firm will use proceeds from the float to invest in growth, with an ambition to be "a global company that enables the analysis of anything by anyone, anywhere."

It sees its $1,000 mobile phone-sized MinION becoming “as ubiquitous as the microscope”, allowing monitoring and early diagnosis of genetic disease.

The PromethION, a $395,000 desktop powerhouse, can sequence an entire human genome in two hours.

Following completion of the company’s last funding round in May, holder IP Group said its 14.5% stake in Nanopore was valued at £359 million, implying a valuation of about £2.5 billion for the entire company.

While no further financial details were provided today it has since reported rising revenues, suggesting the launch price will exceed that value. Holders also include Singapore’s sovereign wealth fund Temasek.

The offering will consist of both new and existing shares, with the company expecting to list a stake of at least 25%.

It is proposing a dual-class share structure, giving executives the right to veto any unwanted hostile takeover bids.

Founded in 2005 as a spin-out of a project at Oxford University, it was among the firms called in to meet Boris Johnson before the government announced a pledge to put life sciences at the centre of its strategy to ‘build back better’ from the pandemic.

Headquartered in Oxford, it has around 600 employees in offices in Cambridge, New York, San Francisco, Singapore and Beijing.

It said revenue growth year on year in its core business of life sciences research more than doubled (+109%) in the six months to June 30, with gross profit of £26.9million.

“An IPO will be a step on the journey to make our vision a reality, supporting our ambitious growth plans and enhancing our ability to innovate and grow."

The deal will bring a potential fillip for investors in Neil Woodford’s collapsed Patient Capital fund now being managed by Schroders: Nanopore is among the largest holdings in the Schroder UK Public Private trust.

But the benefits will be missed by those in the far bigger Woodford Equity Income Fund, whose stake was sold last year by administrator Link.

Acacia bought the 6% stake in Nanopore from for £97.8 million in June. Current estimates suggest it is now worth roughly double that sum.

It has chosen to remain in the UK rather than follow the parade of biotech outfits to list on the Nasdaq in New York, driven both by a loyalty to its roots and the success of a series of recent fundraising rounds.

Sanghera said discussions had been held about a potential shift to list in Wall Street, but “at the end of day, London for many reasons is the right place for us to float.”

Company revenues have benefited from its government-backed role in fighting the pandemic, but he said: “No prime minster is going to tell me where this company is going to float... but the mood music is good.

“It is unusual for a life sciences company not to list on the Nasdaq, but we are a very unusual company.

“We think it’s an urban myth that you can do much better on the Nasdaq, our research and data give us confidence that we’re going to be fine.

“We’re ready for prime time, we’re ready to take on the world... from London.”

Jefferies valued the company at £3.9 billion this year. Bank of America, Citi and JP Morgan are working on the listing.

Julia Hoggett, CEO of he London Stock Exchange, said: “The UK has a long-standing track record of creating companies based on innovative science backed by London’s deep pools of capital.