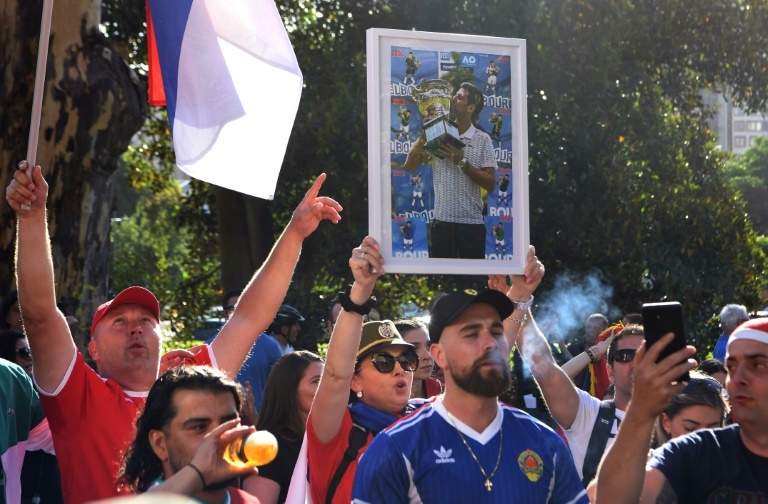 Melbourne (AFP) - Tennis superstar Novak Djokovic said on Monday he was still hoping to compete in the Australian Open after winning a stunning victory over the Australian government in his visa battle.

The ruling by a judge in Melbourne overturned the cancellation of Djokovic's visa on Covid-19 health grounds, and ended the unvaccinated player's detention in an immigration facility, potentially clearing the way for him to play in the tournament that starts next Monday.

The ATP, which runs the men's tennis tour, responded by saying: "The series of events leading to Monday's court hearing have been damaging on all fronts, including for Novak's well-being and preparation for the Australian Open."

His mother Dijana, speaking at a press conference in Belgrade, called it "the biggest victory in his career, bigger than all his grand slams".

Djokovic tweeted from Melbourne: "Despite all that has happened, I want to stay and try to compete @AustralianOpen.I remain focused on that."

In an emergency online court hearing, the judge ordered that the decision to cancel Djokovic's visa "be quashed".

He instructed that the 34-year-old men's world number one "be released immediately and forthwith from immigration detention".

The ATP said in a statement that it "fully respects the sacrifices the people of Australia have made since the onset of COVID-19 and the stringent immigration policies that have been put in place," but added that: "In travelling to Melbourne, it's clear Novak Djokovic believed he had been granted a necessary medical exemption."

His family said justice had been served.

"Truth and justice came to the light.I would like to thank the justice system of Australia," said his brother Djordje in Belgrade, adding that Djokovic had been able to train since being released from detention.

Djokovic posted a photo on social media showing him on court in tennis gear in Melbourne with coach Goran Ivanisevic and other members of his support staff.

The ruling marked an extraordinary setback for Australia's conservative government, which has imposed strict border restrictions for the past two years to halt the spread of Covid.

Australian taxpayers will be asked to pay costs for Djokovic's high-powered legal team.

Several hundred fans dressed in the Serbian national colours gathered outside the Melbourne law offices where Djokovic had watched his successful appeal, dancing and chanting his nickname "Nole".

"It's a big thing for Serbian culture and community," said Marijana Djukic, a 20-year-old university student.

Djokovic had arrived in Melbourne on Wednesday ahead of the Australian Open, where he hopes to win a record-breaking 21st Grand Slam title.

But the tournament may yet be out of reach.

The government's lawyer told the court that Immigration Minister Alex Hawke may decide to use his "personal power of cancellation" despite the player's legal victory.

Rafael Nadal, one of Djokovic's main rivals for the title, said "it is the fairest thing" for his rival to play in the Australian Open.

"Regardless of whether or not I agree on some things with Djokovic, without any doubt, justice has spoken," Nadal told Spanish radio station Onda Cero.

After touching down in Australia last week, Djokovic was taken into an overnight interview with border agents, who decided the champion had failed to present a solid medical reason for not being jabbed.

"I am not vaccinated," he told the official.

Djokovic's visa was revoked and he was moved to a notorious immigration detention facility pending deportation.

He spent four nights in the former Park Hotel, a five-storey facility that holds about 32 migrants trapped in Australia's hardline immigration system -- some for many years.

The court's finding said the government had conceded that its actions were "unreasonable" because the player was not given the chance to reply fully before his visa was torn up.

Though it had no bearing on his court case, Djokovic's claim of a positive test on December 16 stirred controversy after it emerged he had attended a gathering that day for the Serbian national postal service, which launched a stamp series in his honour.

And pictures shared by the Belgrade tennis federation showed him at a young players' event in the city on December 17.

It reported that he handed over cups and prizes to players. No one was wearing a mask.