Djokovic returns to No. 1; Kenin top American woman at No. 7

MELBOURNE, Australia — Novak Djokovic returned to No. 1 in the ATP rankings Monday after winning his eighth Australian Open title, while Sofia Kenin's first Grand Slam trophy boosted her to a career-high No. 7 — and made her the leading American — on the WTA list.

Nadal had overtaken Djokovic in November and, at age 33, became the oldest year-end No. 1. But Nadal lost ranking points by getting eliminated in the Australian Open quarterfinals, by Thiem, one year after being the runner-up to Djokovic.

This is Djokovic's 276th week leading the ATP, the third-most in the history of the computerized rankings, which began in the 1970s. Roger Federer holds the record of 310, followed by Pete Sampras with 286.

If Djokovic can stay at No. 1 until the first week of October, he will surpass Federer.

“That's one of the two biggest goals, for sure,” said Djokovic, who defeated Federer in the semifinals at Melbourne Park. “I mean, there is no secret in that.”

The other? Catching up to Federer and Nadal for most major championships. Federer leads the way with 20, with Nadal at 19 and Djokovic now at 17.

In the rankings, Nadal is No. 2, Federer remained at No. 3, and Thiem went up one place to No. 4, with U.S. Open runner-up Daniil Medvedev sliding to No. 5.

Top Canadian Denis Shapovalov of Richmond Hill, Ont., dropped three spots to No. 16 after a first-round loss at the Australian Open. Felix Auger-Aliassime of Montreal is up one spot to No. 21, while Milos Raonic of Thornhill, Ont., climbed three places to No. 32 after a run to the quarterfinals in Melbourne.

The highest jump in the top 100 was by Tennys Sandgren, an American who went from 100th to 44th thanks to getting to the quarterfinals. He pushed Federer to the brink in that round, holding seven match points, but was unable to convert one.

The 21-year-old Kenin, who lives in Florida, became the youngest woman to win the Australian Open since Maria Sharapova in 2008 by coming back to beat two-time major champion Garbiñe Muguruza 4-6, 6-2, 6-2 in Saturday's final.

Kenin rose eight spots and is the youngest American to make her debut in the top 10 since Serena Williams in 1999.

With Williams staying at No. 9 after her third-round loss in Australia, Kenin moved past a player she considers an idol.

“It hasn't sunk in yet. Everything is just still a blur for me. I just can't believe what happened. Yeah, it's just great. I feel like I'm doing some great things for American tennis. It's such an ," Kenin said Saturday.

“I've watched Serena. I've been following her, all the Slams she's been winning. It's a special feeling just to be ahead of her. I'm just super excited. I can't wait to compete, be on the same team with her in Fed Cup.”

The United States hosts Latvia at Everett, Washington, in the team competition next weekend.

Ash Barty held onto No. 1 in the WTA rankings after losing to Kenin in the semifinals. Simona Halep, ousted at that stage by Muguruza, went from No. 3 to No. 2, switching places with Karolina Pliskova.

Muguruza, who was unseeded at a Grand Slam tournament for the first time in six years, returned to the top 20, going from No. 32 to No. 16.

The 2019 champion in Melbourne, Naomi Osaka, went from No. 4 to No. 10 after losing in the third round to 15-year-old American Coco Gauff. Making it to Week 2 in her tournament debut boosted Gauff from No. 67 to No. 51.

Top Canadian Bianca Andreescu of Mississauga, Ont., who has been out since late October with a knee injury, remains at No. 6. 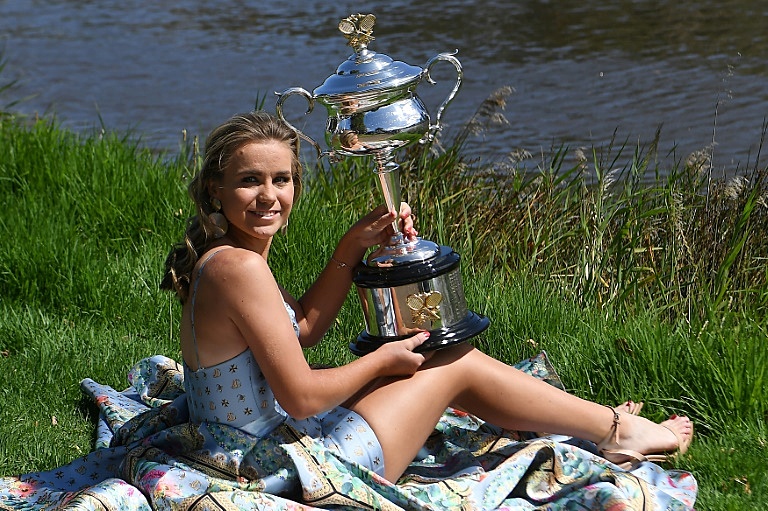 AFP
One subscription that gives you access to news from hundreds of sites
Size doesn't matter, new man Kyrgios - five things we learned at Australian Open