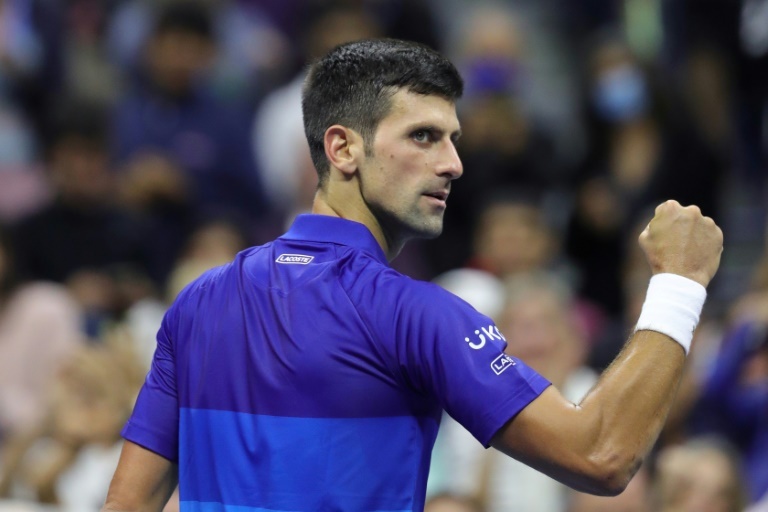 New York (AFP) - Novak Djokovic, making his case to be considered the greatest player in tennis history, goes for the first calendar-year men's singles Grand Slam since 1969 in Sunday's US Open final.

The 34-year-old Serbian world number one faces Russia's second-ranked Daniil Medvedev at Arthur Ashe Stadium in the biggest match of a career that has brought him 20 Slam trophies.

"I'm going to treat this match as it's my last one because it's arguably the most important one of my career," Djokovic said.

"It's going to be a battle against another guy who has been in tremendous form...I know what's expecting me."

Djokovic will try to complete the first sweep of US, Australian and French Open and Wimbledon titles in the same year since Rod Laver managed the feat 52 years ago.

"Excitement is there," Djokovic said."Motivation is there, without a doubt.Probably more than ever.But I have one more to go."

Australian 83-year-old legend Laver will be in the stands to see if Djokovic can finish the fourth Slam in men's history after American Don Budge in 1938 and Laver in 1962 and 1969.

"For sure he's going to feel the pressure a little bit about it," said Medvedev."From the other side, that's what going to make him be even better in tough moments."

The last singles Slam overall was by Steffi Graf in 1988.

A victory would give him 21 major titles and for the first time put him atop the all-time Slams chase, moving one ahead of the record mark he shares with Roger Federer and Rafael Nadal.

"I'm sure he's going to give it all to win his first Slam," Djokovic said."On the other side, I'll be giving it all I possibly got in the tank to win this match."

'Turn up the heat'

Medvedev, the 2019 US Open runner-up, lost his only other Slam final to Djokovic in February at the Australian Open.

"I always give my best, but I feel like I didn't leave my heart on the court in Melbourne.There was something not turning up this match.

"That's what I'm going to try to do on Arthur Ashe.No matter the score, I'm just going to turn up the heat and try to do my best."

Djokovic has won 27 consecutive Slam matches, three shy of his all-time record streak from 2015 and 2016, when he won all four major titles in a row.

"Probably all these big matches I won, big titles over the years, have built that aura around me that players know there's a never-die spirit with me, especially when I play Grand Slams," Djokovic said."They know that until the last shot, things can turn around."

Olympic champion Alexander Zverev, who beat Djokovic in the Tokyo semi-finals but lost to him in the US Open semis, sees Djokovic completing the Slam.

"It's great for the sport," Zverev said."Nobody thought anybody will do it again, what Rod Laver did.To see him have the chance on Sunday -- I do believe that he will do it -- is great."

'Greatest of all time'

The German fourth seed sides with Djokovic in the greatest of all time question.

"If you look at the stats, if you look the pure game of tennis action, he's the greatest of all time.Nobody is there with him," Zverev said.

"Most weeks world number one, most Masters titles, most likely going to be the most Grand Slams at the end of the day.And he has the chance of winning all four in the same year.How do you compete with that?"

Zverev sees Djokovic doing whatever it takes to add to that history on Sunday.

"He plays the best tennis when he needs to, which a lot of players don't.That's why he's the world number one," Zverev said.

"Mentally he's the best player to ever play the game.Mentally, in the most important moments, I would rather play against anybody else but him."