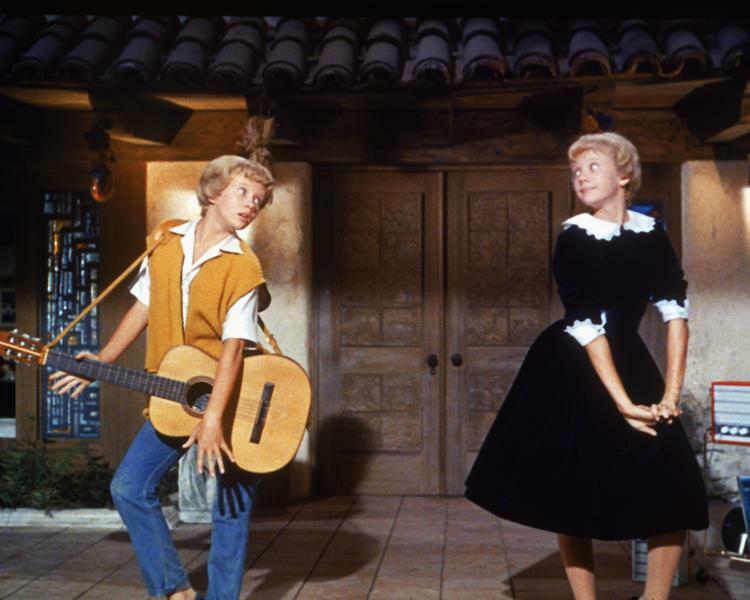 Actress Hayley Mills might just be the real world’s most unintentional “Peter Pan” and for being a Disney darling pretty much her entire life, the irony of that could not be more fitting. Yes, Mills is a grown woman today, but the English actress was never truly “allowed” to grow up in the eyes of much of society, as many still only see her as her beloved Pollyanna character or as those clever twins from The Parent Trap these sixty years later.

“My career happened terribly quickly and it took me by surprise and astonished everybody else,” Mills reveals to me at Forbes. “Nobody was expecting it. I was just a very ordinary little girl. I wanted to ride my pony and hang around with my brother and climb trees and all those things and suddenly, I was in Hollywood. It was great but it took a lot of adjusting for the whole family.”

After she took a nostalgic walk down memory lane about five years ago at the Disney offices looking at archives from her early career, Mills, 75, is now ready to speak out about the highs and lows of her Hollywood journey in the form of a new memoir appropriately titled Forever Young. Even though she is remembered by moviegoers as this confident, adventurous and wildly talkative presence on-screen, in reality, the young Mills often times felt much the opposite.

“I think what was really difficult was that when I was going through adolescence, I became terribly, terribly shy and terribly insecure. I was really lacking in confidence. That made it difficult and it was such a waste of time. I look back now and I think Ugh, what a waste of time, but that’s part of life, isn’t it? That’s part of growing up. A lot of people have the same experience. I really did find going to social occasions torture. I was alright with some people and I was alright sometimes. That was the weird thing about it. As I say in the book, I’d be absolutely fine and then suddenly this monster from the deep would like wrap its tentacles around my ankles and suck me down into the slime and I was inarticulate with shyness and people probably thought that I was just rude or stupid or stuck-up or something like that, but there we are. That’s all part of the journey we’re on, isn’t it? When we are trying to find out who we are and we leave childhood behind, when life was so simple and we lived in the moment.”

In Forever Young, Mills talks about the fun she had filming Disney classics like The Parent Trap, in which Mills played side-by-side twin characters Susan Evers and Sharon McKendrick, a filmmaking trick in the early 1960s that she explains in great detail in her memoir. When I asked Mills if there was anyone on-set she wishes she would have had more conversations with or things she would have done differently while filming The Parent Trap, Mills playfully reveals exactly what she would have changed, especially during her iconic “Let’s Get Together” musical number.

“I would spend a lot more time with Leon Charles, who was the dialogue coach, and I would spend a lot more time on my accents, which wandered about between each twin in the most alarming way (laughs). I’m surprised I got away with it, actually. And I think also I would have worked harder on my guitar playing and piano playing, which were dreadful. Yes, those three things I would definitely go back and sort out. My sons play the guitar, two of my grandsons play the guitar and they think that it is absolutely appalling.”

Like many child actors at the time, Mills was under contract with Disney with a five-year contract. During her quick rise to Hollywood stardom, Walt Disney became a supportive friend and adviser to Mills, guidance early on in her career that she remembers fondly and discusses candidly in her book. Even though he passed away in 1966 after her contract with Disney had ended, I asked Mills what she would say to Walt Disney today, looking back on her experiences with him and seeing how her life & career have played out ever since.

“Gosh! Well first of all, I’d tell him I loved him because I never did tell him that I loved him and I hope he knew it. And I would thank him so much for giving me a career and caring so much about finding the right projects for me as he thought fit. I got some interesting things offered to me and they were not considered appropriate. They didn’t gel with the Disney image at all and nowadays, young actors have a lot more freedom because being under contract is not quite the same as it was then.”

As years went by and life continued on for Mills into adulthood, she began seeking out roles that could set her apart from her well-known Disney persona. Mills found a great love for theatre in her later years, a performing outlet that she says gave her the opportunity to play all kinds of things she had never done before. Mills is also quite memorable to younger generations for her starring role as teacher Carrie Bliss on Good Morning, Miss Bliss, a short-lived comedy sitcom in the late 1980s with her relatively unknown young co-stars at the time Mark-Paul Gosselaar, Dustin Diamond and Lark Voorhies which would eventually evolve into the popular Saved By The Bell series.

“That was the first time that I’d worked in television like that,” Mills continues. “It’s very challenging with the script being re-written all the time, right up to recording time. That’s really hard. The kids were so quick and good and learned things in the twinkling of an eye. I do think that kind of television falls between two stools, between the kind of focus they can give when you make a film and the theatre because it’s so kind of off the top of your head and I was aware that it was only too easy to fall back on old things that you’d done before. Old tricks.”

While many fans of Mills might think that she must have been financially set for life early on following her very successful childhood years with Disney, she has actually spent much of her adult life in legal battles surrounding her trust fund. When Mills turned 21, she was granted access to her trust, but her savings was given a 91% tax rate by the Inland Revenue to help build the United Kingdom back up following the war. Mills says she was able to really rehash those difficult memories around that whole ordeal while she worked with her son Crispian to write this memoir.

“I didn’t realize how much money I would’ve had or I had forgotten because what you’ve never had, you don’t miss and that really was true as far as I was concerned. I wasn’t bemoaning and bewailing. The one thing that it would have given me that would have been very valuable was the freedom to say no and the freedom so I wouldn’t have to go off and work, do something I didn’t particularly want to do but I had to because I had to earn a living and so that would’ve been nice.”

Even though her life has been an elaborate story all its own, Mills is hopeful that readers of her memoir will be able to connect with her experiences and struggles of growing up. “Everybody goes through it, don’t they? I mean, it is a universal experience. Adolescence, puberty, self-consciousness, weight gain, insecurity, self-doubt, all those things. Everybody can identify with that and even though my life was quite extraordinary in many respects, the situation I was in working in my career, my human, personal, private experience was exactly the same as everybody. So, I hope that people will relate and they’ll understand it and see themselves.”

As I wrapped up my conversation with Mills, who is just as captivatingly authentic as you would hope she would be today, I had one final question for the life-long actress and now eloquent author, forever seen as the girl who dazzles us moviegoers, generation after generation: If you could go back to the little Hayley Mills who had just landed her first Disney breakout role in Pollyanna and give her advice after all that you have experienced throughout your life up until now, what would you tell your former self? Hayley takes a moment to think and responds with, “I think I would say don’t waste time. Don’t waste time being negative. Live in the moment. Embrace it all. Be grateful.”