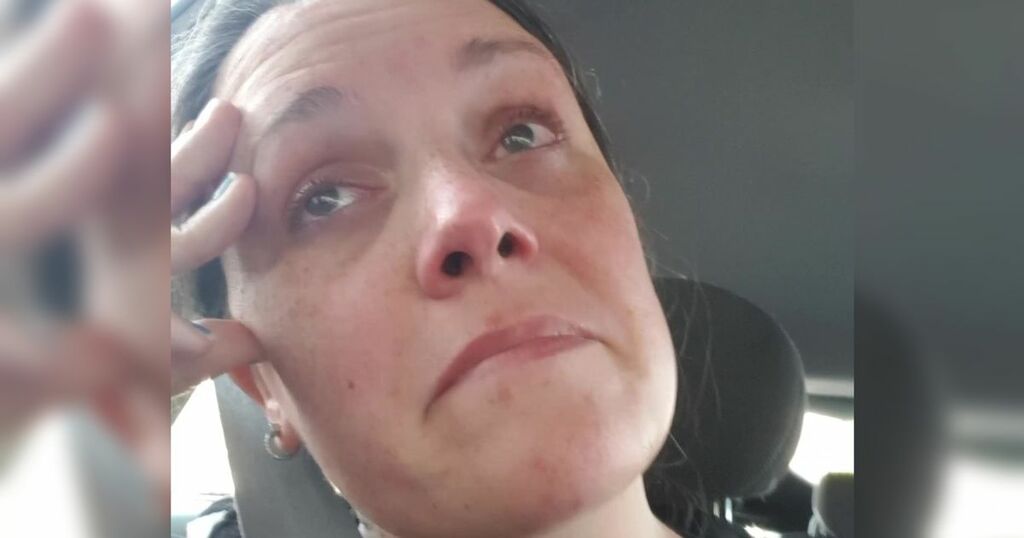 People have reacted with disgust at the Home Bargains staff who allegedly mocked a disabled woman and made a joke about her 'being drunk'.

Dianna Slade, whose neurological disorder affects her balance and makes her hands shake, was visiting the retail giant's Bidston Moss store late last month when her symptoms flared up.

The 37-year-old claims she was mocked by 'cruel' employees after battling to maintain her balance while picking up car mats she'd dropped mid-aisle onto a worker's back.

While she headed to the check-out, already embarrassed by her struggle, she claims she heard a male staff member say "it's a bit early to be drinking, isn't it?" followed by "heartless giggles."

Dianna, who uses crutches to move around, explained the "cruel" barb quickly worsened her symptoms, leaving her to feel "worthless" as she hobbled back to her brother's car and recorded an emotional video.

Sobbing in the clip posted to Twitter, the Functional Neurological Disorder (FND) sufferer shows her violently shaking hands and describes how staff didn't offer help despite her wearing a sunflower lanyard.

The neckwear is intended to act as a subtle hint to retail staff that a customer may need extra help or patience, and Dianna has hit out at staff, claiming they mocked her needs rather than accommodating them.

Dianna, from Meols, Wirral, said: "I'm disabled not drunk. It broke my heart. I was sobbing and I just felt ashamed."

After reading the story, hundreds of people commented on the ECHO's Facebook page and website to vent their disgust at the staff members actions.

On Facebook, Hubble Sue posted: "Their staff are disgusting to treat her like that - they are there to help customers not insult someone who has a disability - hope they get a warning for that, my heart and thoughts are with that girl."

Claire Stark-Couzens said: "That's bad that, even if was a person that was drunk, the person was shaking, wearing a lanyard and dropped the mats whilst also trying to hold a basket and a crutch. Why would peoples first thoughts not be just to help them properly[?]"

Nickie Jones felt the lanyard the woman was wearing may have also been the problem, commenting: "They should be utterly shamed of themselves. I hope it's taken seriously."

Daniel Ritchie said: "I'll be honest I've never heard of the lanyard scheme but that aside, sounds like the staff were horrendously unprofessional."

Irene Fortune posted: "I'm surprised at the staff members attitude, I've always found the three shops I use have lovely staff and I've often commented on the fact but I've never used this particular branch. I can't speak for them, I can understand how upset the customer was."

While Wendy Gerrard posted: "A little empathy goes a long way and disability training is obviously needed for staff".

On the ECHO website, Carol Wilson posted a similar experience of her own. She said: "I had a similar experience when I had a brain virus that left me with very similar symptoms. Wherever I went people judged me for being drunk although I was teetotal. I hated going anywhere. People should be mindful that not all disabilities and illnesses are visible and some impact on balance speech and motion. I know exactly how hurtful it is to be judged when it’s not your fault . Shame on the staff who made her feel so bad."

While whyohwhyohwhy commented: "HB need to train their staff about the lanyard scheme properly - all the other supermarkets know what it's all about - people should think twice before they open their mouths making observations about other people. There are a lot of people out there living with invisible illnesses and these people should count themselves lucky they don't suffer too."

Dianna's FND symptoms first appeared after she bulged one of her spine disks lifting a garden gate in 2016, but before her accident she was an outgoing training consultant saving for a mortgage.

Dianna believes staff should have recognised the 'hidden disabilities sunflower' and taken more care to understand her.

The 37-year-old said her confidence is already "down in the gutter" and the treatment she's claimed to have suffered at Home Bargains means she won't return until staff are "trained properly".

A spokesperson from Home Bargains said: “We are committed to treating all of our customers with respect and do not tolerate discrimination of any kind within our business.

"We take allegations of this nature extremely seriously and are conducting a detailed and thorough internal investigation of what has happened.”