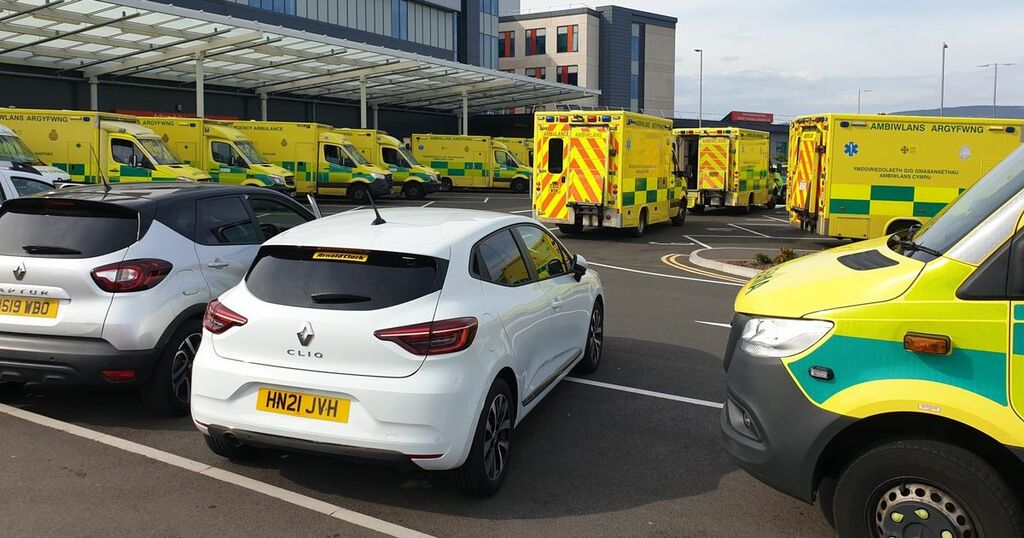 Dire hospital waiting times of up to 18 hours are being reported by patients with pictures of ambulances piled up outside A&E departments.

On Wednesday pictures outside one accident and emergency department revealed “at least 15 ambulances” stacked up outside the hospital.

One person waiting in A&E on Wednesday morning said by then they’d been waiting for 13 hours to see a doctor, while “triage had also taken hours”.

The same patient confirmed to journalists that they had heard others in the waiting area say they had been waiting 18 hours.

The scenes inside and outside the accident and emergency department were at the Grange University Hospital in South Wales.

The Aneurin Bevan University Health Board told WalesOnline that the department at the hospital had “experienced unprecedented demand over recent weeks due to high levels of very poorly people”.

“The Covid-19 pandemic and its knock-on effects, as well as staff shortages, have caused a further significant strain on our services,” a spokeswoman said.

Sheila James, 73, said she decided to leave the A&E waiting area at the hospital last month because she had been sitting for more than seven hours and suffers with arthritis.

“I went there on the Saturday after my daughter thought it was the best place for me to go,” she said. “I had suffered with a nose bleed for well over 24 hours, probably two days - and I was losing quite a lot of blood.

“On the first occasion I had to leave because I was so uncomfortable.

"I was in there from 3pm until well after 9pm. Then the next day I went to the Royal Gwent, but they sent me back to the Grange.

"On the Sunday I spent another seven hours there before I was seen by a specialist.

“The waiting times aren’t helped by how uncomfortable it feels. The seats are so hard, you can’t go outside in case you’re called. People were being seen at a rate of probably two an hour. I’ve never known that to be the case at the Royal Gwent.”

A health board spokeswoman explained: “When patients arrive at the ED they are initially assessed by a nurse and their care is prioritised according to the seriousness of their condition.

"All patients requiring life-saving treatment are brought straight into our resuscitation department without delay.

“At times when ED staff are caring for people whose lives are in danger, people with less serious conditions may experience long waits to be seen by a doctor.

“We are continuing to ask people to think very carefully before they attend the Emergency Department at The Grange University Hospital – this facility is designed to treat the most severely unwell and injured patients for conditions such as heart attacks, strokes, and very severe injuries.”

A mother of a boy who fractured his skull said they had also waited all day in the department to be seen last month.

The Grange has the only emergency department in the Aneurin Bevan University Health Board area. When it opened last year, the Royal Gwent and Nevill Hall hospitals were downgraded to minor injuries units.

Sheila said it has made people confused as to where they should and shouldn’t go.

“Knowing which hospital to go to is so confusing,” she added. “How do you know whether your condition is minor or serious? I had blood pouring from my nose for more than a day. To my mind that’s serious.”

“If your condition is not life threatening and you are unsure of where to go, please call 111 for help and they will direct you to the appropriate health service for your needs,” the health board advised on Wednesday.

“People can also attend our minor injury units in Newport, Abergavenny, Ystrad Mynach and Ebbw Vale or contact their GP surgery or local pharmacy instead of facing long waits for minor conditions in ED.

“We would like to thank our staff for their hard work in such testing circumstances and to our patients for their understanding at this time.

“In response to the increased demand for our services, the health board is working to rapidly recruit more doctors, nurses and other roles to improve waiting times, patient experience, the flow of patients through our hospital system, and the wellbeing of our staff.”

Last month an ambulance worker described “soul destroying” delays in getting patients into the Grange, which he said could end up “costing lives”.

“Our job is to be in the community looking after people. We’re not a hospital A&E department cubicle, but that’s what we’re being made to be.”

Samantha Hurn, Interim Locality Manager for West Aneurin Bevan at the Welsh Ambulance Service, said: “The delay of the handover of patients to hospitals not only delays treatment of patients waiting in an ambulance queue at hospitals, but they also reduce the availability of ambulances to respond to other emergencies in the community.

“Over the Covid-19 pandemic, handover delays have inevitably increased as hospitals have had to treat an increased number of patients, but we continue to work closely with health board colleagues to reduce delays.

“We remind everyone that calling 999 should be for serious or life-threatening emergencies only as the Welsh Ambulance Service continues to receive very high numbers of calls which do not fall into the latter categories.

“If it’s not a serious emergency, please consider the other options available to you, including the symptom checkers on the NHS 111 Wales website in the first instance, as well as your GP, pharmacist and nearest minor injury unit.”